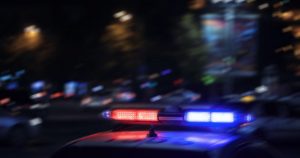 A Chicago police officer was injured Friday night (June 12) when struck by a fleeing vehicle after a traffic stop in the River North neighborhood.

Officers were conducting a traffic stop at 11:17 p.m. Friday in the 100 block of West Chicago Avenue and removed the driver from the vehicle. The passenger jumped into the driver’s side of the vehicle and fled, striking one of the officers.

The officer suffered minor injuries and was taken to Rush Hospital, where the officer was listed in good condition.