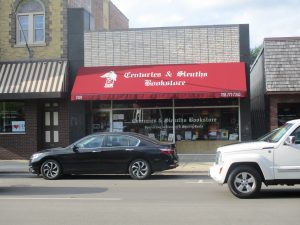 With the name like Centuries & Sleuths, it doesn’t take a detective to realize that this longtime west suburban business is no ordinary bookstore.

From the beginning, owner August “Augie” Aleksy wanted to set it apart from the more generic chain bookstores that were coming into prominence in the early 1990s. As the name would suggest, he focused on fiction and nonfiction dealing with history and crime.

Aleksy believed that the store has been able to last for 27 years thanks to warm, friendly atmosphere, as well as the variety of discussion groups and events the store hosts on regular basis. At the same time, he readily acknowledges that the business climate has gotten more difficult, which he blames on the fact that people simply have less money to spend.

In the end, Aleksy said that the best he could hope for was that more people would recognize the value of independent bookstores like his.

Centuries & Sleuths Bookstore originally opened in Oak Park. Aleksy said that, with Borders and Barnes & Noble bookstores, the last thing he wanted to do was to open a “generic” bookstore. He was already interested in history, and when he looked at what people were checking out at Oak Park Public Library, he noticed that it, along with mystery, were the two genres that were most checked out.

However, a mentor from Service Corps of Retired Executives (SCORE) advised him that what people check out for free isn’t necessarily indicative of what they were willing to spend money on. So he sent out a survey asking people what kinds of books they purchased over the past six months. Aleksy said he sent it in January to catch winter holiday purchases.

In the end, what he got back was enough to encourage him to give the idea a try. He opened the store at 743 Garfield St., near the spot where Oak Park Avenue crossed the Eisenhower Expressway. Aleksy said that it was a matter of simple economics — he simply couldn’t afford a space at any of the village’s major commercial corridors. Still, he hoped to turn the location to an advantage.

“I anticipated that people would come here on the way back from work,” he said. “But most people were only interested in getting home from work.”

Undeterred, Aleksy kept going — all while trying to find a better location. And eventually, an opportunity did come. In 2007, the Forest Park Chamber of Commerce invited him to move the bookstore to what would become its current location, at 7419 W. Madison Ave. As Aleksy explained, they were looking to diversify one of Forest Park’s main commercial strips. 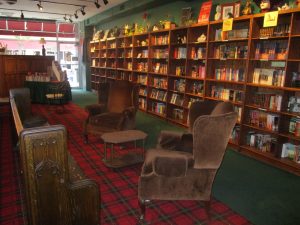 “They wanted my kind of bookseller, and they wanted a bookseller to add to the ambiance on the street,” he said. “Because Forest Park, prior to that time, was primarily known for their taverns.”

The chamber helped Aleksy along by reimbursing him for the cost of renovating the new space. They also covered the moving expenses and helped him get the word out to his customers about the move.

“It was a great opportunity, and, to this day, I’m happy with my decision,” Aleksy said. “It’s a vibrant business community, and I’m proud to get involved with what’s going on on the streets over here.”

The customer traffic has improved, he said, and he was grateful for the support he received from Forest Park’s business community over the years.

The bookstore is made up of a large space in the front and a smaller space toward the back. At the main space, the books along the west wall are mysteries, while most of the books on the east wall deal with history. There is a large section of Sherlock Holmes related books along the north wall. The rear space has true-crime books, books dealing with the history and architecture of Chicago and the western suburbs, a few books that don’t fit the store’s themes and children’s books. Most of the books are priced as labeled, but there are a few for-sale bundles and paperbacks in the back. 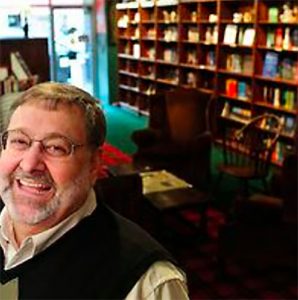 Aleksy said that he deliberately tried to avoid the clutter he sees in many bookstores, especially used bookstores.

Various objects dot the tops of the shelves — drawing, figurines, tea pots, statues, and more. Aleksy explained that they were something he collected over the years. But perhaps the most striking object is a church pew located near the middle of the main space. Aleksy explained that it came from Oak Park’s St. Edmund Catholic Church.

He and his wife were attending an event there while he was already planning to open the bookstore. Aleksy mused aloud that it would be nice to put a church pew in there, and, to his surprise, the priest at the time told him that he actually had several available. The church had to remove several to comply with the Americans with Disabilities Act, and they’ve been sitting in his garage.

Since then, the pew not only became a place to sit. Over the years, Aleksy added plaques honoring people who made some kind of valuable contribution to the store or its discussion groups.

When it comes to choosing which books to stock, Aleksy said he purposefully avoids bestsellers. His customers could get them at any grocery store anyway, he said, and he wanted customers to visit because they were looking for something more unusual. He tends to order books based on what members of the store’s discussion groups are interested in, what catches his interest while looking through publisher catalogs and generally what he would personally like to read.

Aleksy said that he sees Centuries & Sleuths as a place where customers can share their opinions and recommendations, which he feels is a major reason why the store lasted as long as it had.

“For the most part, people are social, and they like to share ideas,” he said. “It makes books more interesting.”

Aleksy also credited the store’s events, book signings and discussion groups for attracting interest. He found that they tend to bring in customers and help sales. The store also hosts meetings of two mystery writer organizations — the local Sisters in Crime, an organization of female mystery writers founded by Chicago author Sara Paretsky, and a local chapter of Mystery Writers of America.

“Another part of my role as a bookseller is to encourage writing,” Aleksy said.

He noted that author Luisa Buehler, who writes murder mysteries set in the western suburbs, was a member of Sisters in Crime before she published her first novel.

Furthermore, the store used to put on plays featuring important historical figures. Aleksy said that this was something that fell by the wayside because he has been busy with the Forest Park Chamber of Commerce and other activities. But he said he was hoping to restart it next year.

“My plan next year is to have people portraying leaders of the world in 1914, where they prevent World War I,” Aleksy said. “It was one of the most preventable wars.” 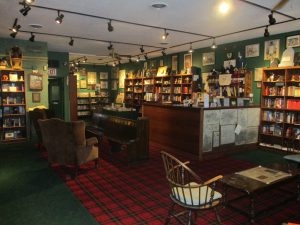 Centuries & Sleuths Bookstore stocks mysteries along the west, while most of the books on the east wall deal with history. (Photo by Igor Studenkov/for Chronicle Media)

While he is proud of everything he has accomplished, he said that the business has definitely become more challenging in recent years.

“I think my sense is that a lot of blame is on the economy,” Aleksy said. “I don’t think people have excess income to buy books the way they had in the past.”

He noted that the Centuries & Sleuths has an active online presence, including an online store, an email newsletter and a regularly updated Facebook page, but that doesn’t seem to be making that much of a difference.

“I don’t know if people can afford what they’ve been able to afford in the past,” Aleksy said. “And the whole purpose, too, was to make it a different bookstore.”

As previously reported by the Chronicle, in October 2016, 24 Chicago and suburban bookstores — including Centuries & Sleuths —  formed the Chicagoland Independent Bookstore Alliance in order to pool resources and support each other. When asked whether this affected his store in particular in any way, Aleksy said that it was still too early to tell.

“It’s too young right now,” he said. “But it’s nice to share ideas and publicity with others. It’s a good thing — I’d rather have it than don’t.”