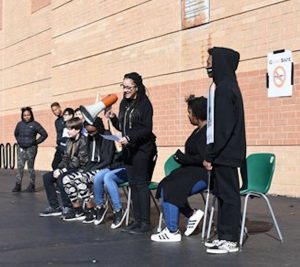 On the one-month anniversary of the horrific massacre of 14 students and three teachers at Marjorie Stoneman Douglas high school in Parkland Florida, students at more than 3,000 schools around the country left their classrooms Wednesday to rally in support of protecting students from gun violence.

Starting at 9 a.m. March 14, cable television broadcast the images of tens of thousands of students on the East coast pouring out of hundreds of schools chanting “This is what democracy looks like,” and “We will not be silent.”

Right at 10 a.m., nearly the entire student body of the Forest Park Middle School in near west suburban Forest Park followed suit, trekking out to the school’s playground for a 40-minute rally.

The event was primarily intended to call for an end to gun violence. But there were also calls for an end to bullying by students, a desire for allowing kids to just be kids and not have to worry about “adult issues” like lethal firearms, and demands that elected officials take substantive actions to protect students.

One of Wednesday’s rally organizers, eighth-grader Ryan Taylor, held up a sign that read, “We are District 91. We want change.”

Another student organizer, Ariel Smith, spoke first, opining, “There is no reason for assault rifles. (They) just cause destruction, whether you’re at a concert or in church or in school.”

Bemoaning a society that “hasn’t learned anything” from the tragic litany of school shootings, she asked, “What will it take? How many people have to die?”

One girl mourned the unexpected and violent end to so many young lives, saying, “They weren’t able to finish their lessons. Instead, they finished their lives there.”

“I shouldn’t have to worry about things that are adult matters,” she said.

In a not so veiled slap at President Donald Trump, one boy said, “Many of our elected officials aren’t doing anything about it except tweeting.”

“Those kids who were killed, they didn’t know that day was going to be (their last day),” said another.

Alice Goodman stood off to the side with several other adults, watching her niece Ariel Smith stand with her fellow rally organizers. She said she was proud of her niece’s willingness to stand up and give voice to what she believed in.

“I feel that this is awesome,” Goodman said. “She’s been really active in it, and really excited about it. She just kind of took the lead and put this together.”

Principal Joe Pisano was also pleased with his student’s project. He said he was approached by several eighth-grade students in the days following the shooting in Florida. Six students, Kayla Chandler, Ryan Taylor, Ariel Smith, Ian O’Connor, Aaliyah Bailey and Anaya Marks, worked with Pisano to plan, organize and publicize the event.

“This was all their idea, their thing,” he said. “With some guidance and coordinating with some of their teachers.”

Pisano, a former Social Studies teacher, called the student’s interest in expressing their views on school shootings “a teachable moment.”

While the day was widely referred to nationally as a “walkout,” the Forest Park students organized a rally in cooperation with school authorities.

“They thought just walking out and not really saying anything would confuse the message,” Pisano said. “

The six rally organizers spent hours planning the rally over lunchtimes and writing speeches. On Tuesday they spent more than an hour after school making antiviolence posters for display at Wednesday’s rally.

“There was a lot of passion involved in that,” Pisano said. “When you see the passion that the students had … to create something and share that with their peers and involve the whole school community, was an opportunity, it was a teachable moment for them.”

“This was an opportunity for them to express their first amendment right. And this is what democracy looks like.”

Pisano said he was pleased both with the concept and execution of the rally.