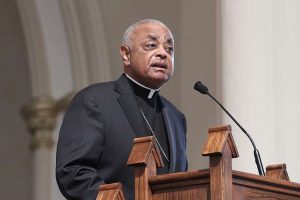 A priest with Chicago area and Metro East ties has been named the new archbishop of Washington D.C.

Gregory, 71, was born in Chicago, served as an associate pastor at Our Lady of Perpetual Help Parish in Glenview, a member of the faculty at St. Mary of the Lake Seminary in Mundelein and was ordained an auxiliary bishop of Chicago.

He also served for 11 years as the bishop of the Diocese of Belleville.

“I am deeply grateful to Pope Francis for this appointment to serve the Archdiocese of Washington and to work with all of the members of this faith community,” Gregory said. “I look forward to encountering and listening to the people of this local Church as we address the issues that face us and continue to grow in the love of Christ that sustains us.”

“With great joy, I welcome the news that our Holy Father, Pope Francis, has favored this local Church with the appointment of Archbishop Wilton Gregory of Atlanta, as the seventh Archbishop of Washington. I join all who appreciate his pastoral abilities, his intellectual gifts and his leadership qualities,” said Wuerl who has served as apostolic administrator of the Archdiocese of Washington since October. “As the Church of Washington opens a new chapter and looks to the future, we can all, with great confidence and enthusiasm, welcome our new shepherd.”

He was ordained a priest of the Archdiocese of Chicago on May 9, 1973 and three years after his ordination began graduate studies at the Pontifical Liturgical Institute (Sant’ Anselmo) in Rome. There he earned his doctorate in sacred liturgy in 1980.

After having served as an associate pastor of Our Lady of Perpetual Help Parish, as a member of the faculty of St. Mary of the Lake Seminary and as a master of ceremonies to Cardinals John Cody and Joseph Bernardin, he was ordained an auxiliary bishop of Chicago on Dec. 13, 1983.

“With great pride, the Church in Chicago rejoices in the appointment of our native son, Archbishop Wilton Gregory, as the seventh archbishop of Washington,” the statement said. “Known to us, and especially his brother priests in this local Church, as a proven pastor and devoted friend, we offer Archbishop Gregory our heartfelt congratulations and warmest best wishes. We look forward to his continuing service to the people of God as he begins his new ministry in our nation’s capital.

The installation of Gregory as the seventh archbishop of Washington will take place on May 21.

Archbishop Gregory has served in many leading roles in the U.S. church. In November 2001, he was elected president of the U.S. Conference of Catholic Bishops, following three years as vice president under Bishop Joseph Fiorenza of the Diocese of Galveston-Houston. During his tenure in office, the crisis of sex abuse by Catholic clergy escalated; and under his leadership, the bishops implemented the “Charter for the Protection of Children and Young People.”

He has served on the USCCB’S Executive and Administrative committees, the Administrative Board, the Committee on Doctrine and the U.S. Catholic Conference Committee on International Policy. He previously served as the chairman of the Bishops’ Committees on Personnel, Divine Worship and the Third Millennium/Jubilee Year 2000 from 1998-2001, and Liturgy from 1991-93.

Gregory has written extensively on church issues, including pastoral statements on the death penalty, euthanasia/physician-assisted suicide and has published numerous articles on the subject of liturgy, particularly in the African-American community.

In 2006, he joined an illustrious group of preachers with his induction into the Martin Luther King Board of Preachers at Morehouse College, Atlanta. At the National Pastoral Life Center in Washington D.C., Gregory was honored with the Cardinal Bernardin Award given by the Catholic Common Ground Initiative (2006).