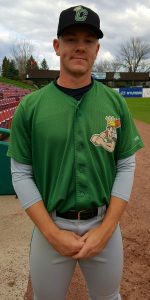 Jack Anderson, who pitched for Evanston in high school, is working on a submarine pitch in the minors, hoping to eventually make it to the majors.

Jack Anderson was just another sophomore pitcher at Evanston in 2010, pitching a summer league game against rival New Trier.

After Anderson threw, New Trier’s pitching coach, Paul Kosinski, made a bold proclamation to him.

“He came up to me afterward and was like, I think I can make you a Division I pitcher,” Anderson said. “That was the dream at the time. I was like, all right, I’ll be there whenever you need me. I’m jumping all over that.”

The plan worked, as Anderson eventually pitched for three seasons at Penn State. That led to him being drafted in the 23rd round by Seattle last year.

It wasn’t a conventional route, however. Kosinski, who is also the general manager at The Strike Zone Baseball Academy, turned the 6-foot-3 righty into a submarining reliever. Anderson mastered the craft, and found himself opening this season for lowa Class A Clinton about 40 miles from home April 6 at Kane County.

“I was always throwing a pretty low sidearm throughout Little League, which frustrated some coaches,” Anderson said. “The way I describe it to people is that I’m throwing from the same arm slot, but it’s just bent over. It just became natural after that. It’s something that worked for me pretty well, so I kept it going.”

The biggest positive of that throwing motion, when mastered, is deception. There are so few submarine pitchers in baseball that hitters have a hard time adjusting to it. That also means that pitching coaches can be at a disadvantage trying to help submarine pitchers.

First-year Clinton pitching coach Doug Mathis, however, has some knowledge of the pitch. Over the course of his three-year Major League stint with Texas from 2008-10, he pitched alongside submariner Darren O’Day, who is now with Baltimore.

“If you’re good at it, you can definitely stick around,” Mathis said. “That’s why those guys are so unique; you don’t have many of them. If you have a guy like that who can consistently throw strikes, that’s a huge upgrade if you can have one.”

Anderson knows the ins and outs of his unique delivery, but still appreciates being around people who understand it as well.

“I think I’ve been pretty lucky throughout my career coming across guys who have had experience with people who throw like me or similar to me,” Anderson said. “Doug is going to be a great resource for me. He’s very knowledgeable about baseball and it’s an added bonus that he’s been around a guy like me.”

The goal of the pitch is to gain movement, not velocity. It is already coming from an angle that is unfamiliar to hitters.

“It’s definitely deception, giving batters another look,” Anderson said. “It’s something funky. They’re not used to looking at that arm slot. A lot of baseball is trained toward velocity from pitchers, especially from bullpen guys. I’m looking for as much movement as I can grab.”

Anderson excelled at the Mariners’ Arizona rookie league stop and earning two scoreless appearances at short-season Class A Everett last year. On April 6 he allowed an unearned run on three hits over two innings. That puts him at 3-1 with a 1.57 ERA in 23 professional innings.

Anderson is hoping that translates to some late-inning work for the LumberKings this year.

“Throughout my career, I’ve always been a guy that pitched in high-leverage situations,” Anderson said. “It’s something that I think I thrive on. I know we’re starting the season with no roles. I’m just here to help the team in any way I can. Whatever comes out of that will be great.”