“Just basketball was the only way to get out (of the neighborhood),” Hunter, a Maywood native, said. “You could be a real good basketball player or a real good athlete, that was it.”

Hunter became that real good basketball player, being an All-State center at Proviso East High School, a player at DePaul University, and, at the age of 19, a No. 15 pick in the National Basketball Association’s 2001 draft. He had a nine-year NBA career and is now a community ambassador for the Phoenix Suns.

Dampier played at St. Joseph’s High School and went to Robert Morris College, but his basketball career would go no further. Living in Chicago’s Gresham neighborhood, Dampier was fatally shot Sept. 1 near the Bellwood Metra station.

“I buried my best friend … I was one of the pall bearers,” Hunter said. “I wish we had more options coming up.”

Looking to provide those options for today’s youth, Hunter has teamed up with Woz U Education, a teaching enterprise, to provide technology-based education at elementary and middle schools in the Chicago area. Hunter is providing up to $5 million to get the project started.

Maywood-Melrose Park-Broadview School District 89, where Hunter was a student, is the first district to launch the initiative. The Steven Hunter Youth Foundation is providing Science, Technology, Engineering, Arts and Mathematics kits to District 89 students participating in the after-school program. 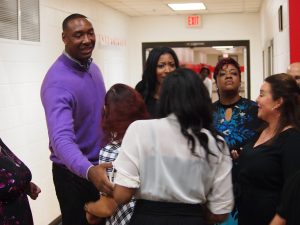 Hunter is a graduate of Garfield Elementary School, one of nine schools in District 89 to receive the STEAM kits. The collaboration aims to empower students to acquire coding and software development skills.

The launch of the program was unveiled as part of the District 89 Education Foundation Fundraiser on Sept. 19.

“This is a fabulous way to reach students. It is a great way for them to learn what they need to,” Dianne Williams, president of the District 89 School Board, said of the after-school program. “I had one parent come to me and said he was going to put his child in a coding camp, but that it was so expensive.”

Participants will not be charged to be in the program, Williams said. She added that District 89 teachers will be heading the after-school clubs and working with students.

“We are grateful to have Steven continue his support of the students in Maywood with his generous gift,” Williams said. “The STEAM kits will enable our students to develop valuable technology proficiency through their experience in our school system. Educating our students in the tech category is crucial to guiding them on a successful career path without the burden of student loans.”

She said that the Hunter Foundation has vowed to pick up the expenses of the after-school program for its first five years of operation.

Billy Garner, vice president of community outreach for Woz U, said that youth will learn coding terms as early as kindergarten and make drones as they progress through the program’s three different levels.

“From K-8, the curriculum will engage students and maintain their interest,” Garner said.

Garner said with school districts struggling to fund education programs, Hunter’s effort to bring coding instruction into Chicago area schools is expected to be most welcome.

“We are starting off with District 89,” Garner said, noting that the hope is for the coding instruction to spread to schools throughout the Chicago area and nationally. 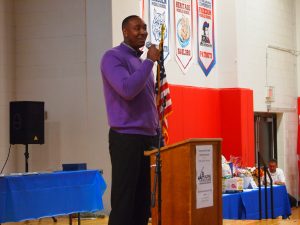 Former NBA player and Maywood native Steven Hunter addresses attendees at the Maywood-Melrose Park-Broadview School District 89 Education Foundation Fundraiser about his efforts to bring technology education to students. Hunter has pledged up to $5 million to get technology-based after-school programs started in Chicago area schools. The program will begin in District 89. (Kevin Beese/Chronicle Media)

“We are proud to provide District 89 students with the resources to learn and develop proficiency in coding as early in the learning process as possible,” said Karen Young, CEO of Woz U. “The technology economy is growing rapidly and is ever-evolving. The program will equip students with hands-on projects to gain the skills necessary to begin a technology career post-high school.”

The partnership aims to challenge students to advance their growth in the tech field during their education. The STEAM kits aim to begin teaching students basic coding concepts through hands-on activities, and progress to more advanced block-based and text-based code. The evolution of coding lessons starting in kindergarten aim to guide students to comprehend computer skills as a career path to the technology industry.

“I’m committed to the community I grew up in and assisting the students with the resources to develop an engineering mindset via the STEAM program,” Hunter said. “We will be able to ignite economic development in the Maywood area by providing a platform that will inspire the children and immerse them in the tech community at an early age. It’s rewarding to provide third-graders with the opportunity to build their first drone.”