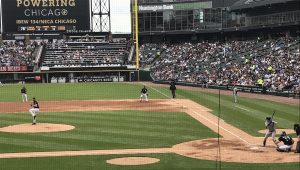 Federal officials say a ticket broker got complimentary and discounted Chicago White Sox tickets from two former Sox employees and then turned around and sold the tickets on StubHub at prices below face value. The broker, Bruce Lee, made more than $860,000 in the scheme, investigators say.

Two former employees of the Chicago White Sox schemed with a ticket broker to fraudulently sell thousands of tickets to Sox games, according to an indictment returned in federal court in Chicago.

While working as ticket sellers for the White Sox, James Costello and William O’Neil fraudulently generated complimentary and discount game tickets without the team’s authorization and gave them to the broker, Bruce Lee, in exchange for cash payments, the 14-count indictment returned Jan. 31 states. Lee, who owned the Chicago-based ticket brokerage Great Tickets, then sold the tickets on the online marketplace StubHub at prices below face value, the indictment states.

During the 2016-19 baseball seasons, Lee earned $868,369 by selling 34,876 tickets that he fraudulently obtained from Costello and O’Neil, the charges allege. As a result of the scheme, the White Sox suffered a loss of $1 million, the indictment states.

Federal officials say Costello recruited O’Neill to help in the scheme at the start of the 2017 season.

Investigators said the baseball club’s rules and regulations require a physical voucher for any complimentary or discounted tickets to be issued and that the vouchers be retained in the ticket office. The team rules also prohibit ticket sellers from scalping tickets at any price, investigators said.

StubHub’s terms of service prohibit the sale of stolen tickets.

Lee used StubHub for selling the tickets, investigators said, because he felt it would conceal the source of the tickets.

The indictment alleges that Costello and O’Neil provided thousands of complimentary and discounted tickets to Lee without any vouchers in exchange for cash payments.

Each count of wire fraud is punishable by up to 20 years in federal prison, while each money-laundering count carries a maximum sentence of 10 years. The false statement charge is punishable by up to five years. If convicted, the court must impose “reasonable sentences” under federal statutes and the advisory U.S. Sentencing Guidelines.

If Lee is convicted, federal officials said they will seek to recover the $868,369 the ticket broker allegedly obtained through the scheme.