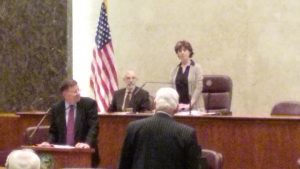 Just how Chicago pays for additional police officers down the road is a concern to a watchdog organization.

While giving the city a thumb’s up on its proposed fiscal year 2017 budget, The Civic Federation, an independent nonpartisan government research organization that provides analysis and recommendations on government financial issues for the Chicago region and the state, questioned how the city will sustain the cost of the 970 officers it will be adding to the police force over the next two years.

The Civic Federation noted that the total cost, when salary and benefits are added, equals $138,000 per officer.

“We need to have a plan for how we are going to absorb that,” said Laurence Msall, president of The Civic Federation. “The initial cost because of the way the hiring will be done, because there is a lag in the hiring is not as significant as the out year costs for that … . This budget is balanced, but it doesn’t have a large untapped reserve for future costs. There’s still a structural budget challenge going forward.

“We need to identify what that source is. There are no easy revenue fixes left.”

Msall said the state not having a budget in place straps the city because of its dependency on state funds. He said that the state cannot hamstring Chicago and other local governments in order to try to fix its own problems.

“You cannot basically balance your budget at the expense of the local governments for other longer term needs of the state,” Msall said.

He noted that The Civic Federation supports expanding the sales tax base in the state to include some services, which are currently exempted from the sales tax.

Ald. Brendan Reilly (42nd Ward) said that the state’s failure to distribute income tax money and other funds to local governments is taking a toll on the city.

“It has an absolute cost,” Reilly said. “Every dollar the state of Illinois takes away from the city of Chicago is one more dollar that we need to find locally and, as we all know, that tends to fall heavily on the local property tax.

“I find it a bit ironic that Gov. (Bruce) Rauner who hates property taxes so much is effectively de-funding the city of Chicago and local municipalities around the state of Illinois.”

Msall talked to aldermen last week about their financial road map, the 14th time he has represented the Chicago-based research organization at the city’s annual budget hearing. The Civic Federation has been given the honor of speaking first at the public hearing for the last 122 years.

According to Msall, the city’s garbage fee of $9.50 per month only covers about a quarter of the cost of garbage service and should be increased. He said the fee should be more in line with covering the costs of the refuse program.

“The city faces, as all of you know, enormous financial challenges,” Msall said. “To the extent you can tie the taxes and fees and how they are being used more clearly the greater transparency there will be and the greater confidence that that money is being spent as stated, but it’s not enough to fund all the municipal waste services.”

Msall recommended that the city develop long-range plans to address its financial future, including the costs of future police personnel as well as city pensions.

“We need more detail on how the city is going to go forward, especially with the long-term pension funding,” Msall said.

Bill Bergman, director of research for Truth in Accounting, a Chicago-based nonprofit dedicated to informing citizens about government financial reporting, said he listened to the “gutsy” vision put forth by city officials to provide a balanced budget. He said the budget is being balanced by drawing money from other funds.

“For five years, the city has overspent its budget by $1 billion every year,” Bergman said.

George Blakemore, an outspoken critic of city officials, said the city has to get its financial house in order.