Who is Jack Paleczny?

If that’s the answer to a question posed by Alex Trebek on the hit show Jeopardy!, contestants who answer correctly might guess that Paleczny is the man of the hour.

But Paleczny, of Chicago, might technically be the man of the half hour when he appears as a contestant on Jeopardy! on Jan. 9.

“It was a great experience,” Paleczny said.

“I’ve been a lifelong fan of the show.” 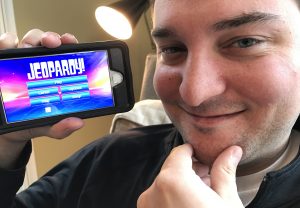 Jack Paleczny, 27, formerly of Northbrook, will compete as a contestant on Jeopardy! on Jan. 9. (Photo by Karie Angell Luc / for Chronicle Media)

Paleczny, 27, formerly of Northbrook, traveled with his parents, Mike and Kathy Paleczny of Glencoe and his girlfriend Caitlin Sheehan of Chicago, to the West Coast last September to the set of Jeopardy!

“He did a great job on the game show,” Jack’s father said.

“I was very nervous the whole time.

“He (Jack) started off a little slow in the game but he built a lot of momentum,” Mike Paleczny added.

“He did quite well.”

Jack has a brother Peter Paleczny, 22, of Chicago and a sister Megan Paleczny, 25, also of Chicago. The family pup in Glencoe is Cody, a male golden retriever.

How well did Paleczny do? Due to confidentiality requirements, any “What is” correct answers cannot be offered. Here’s a clue.

“Every bit (of winnings) that was earned is probably going to go towards law school tuition,” said Jack Paleczny, who is in his second year at Chicago-Kent College of Law.

“I’m happy with the outcome.”

He started the Jeopardy! online process a few years ago.

There were times Paleczny felt he might have to restart his audition.

“I thought the call would never come,” he said.

But then came the notification he’d have to best the hot lights of a syndicated show.

“They do a lot of makeup and I was rubbing it off for probably a good two days after my programs were done,” he said with a laugh. 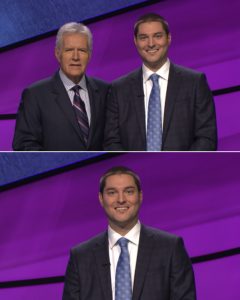 Chicago resident Jack Paleczny (above left and below) appears with host Alex Trebek while a contestant on “Jeopardy!.” The show will be broadcast on Jan. 9. (Photo courtesy of Jack Paleczny)

Still, rubbing shoulders with Alex Trebek might be cool even in a freezing studio.

“The thing that I will always remember about being on Jeopardy! is how nice all of the people are,” Paleczny said. “Everyone made me feel at home,” he added, complimenting, “the friendly staff” at “Jeopardy!.”

Paleczny, a 2008 Glenbrook North High School of Northbrook graduate, added that his friends are “very excited for me and a lot of people have been congratulating me.”

While at GBN, he played Spartans varsity volleyball and pursued school radio opportunities.

The only quiz bowl he competed in was on behalf of a GBN quiz team as a senior.

“We did pretty well,” Paleczny said, of that GBN quiz bowl team making it to the state quarter finals.

But: “I’m not the best with numbers,” said Paleczny, whose strong subjects are English, history and geography.

“I was lucky enough to have quite a few of those categories end up on the show,” he said.

One question in the Brazilian food category on Jeopardy! had to do with tapioca.

Paleczny, who likes watching cooking shows, served up the word, “arrowroot.” Judges researched arrowroot during a taping break before allowing it as a correct answer.

“They gave me credit for it,” said Paleczny, who added he thinks he’s never tried tapioca. He doesn’t plan to try it soon, either.

While in Los Angeles, Paleczny, his parents and girlfriend did not see or attend tapings of other programs or shows.

But when Alex Trebek told an audience member that he’d like to visit the Culver Hotel in Culver City, Calif., the Paleczny entourage made that their beeline tourist stop.

The 1939 film, “The Wizard of Oz” features munchkins. Actors cast for this role reportedly took up infamous and temporary residency at the hotel.

“We celebrated with a drink,” he said. 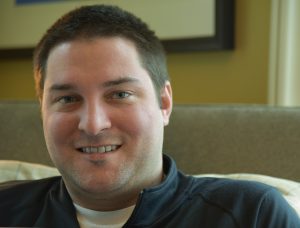 “Being on the show was my Emerald City, getting all the way there,” said Paleczny, who is studying property law.

“This will be something I’ll be talking about for the rest of my life, for sure,” he said.

“Job interviews, putting it on my resume, everywhere I go.”

Does Paleczny have advice or insights to offer from his experience.

“Don’t be afraid to fail a few times, keep being persistent, keep working hard. Eventually, good things will happen.That’s the most important lesson,” he said.

— Glenbrook North grad has a journey on Jeopardy! —