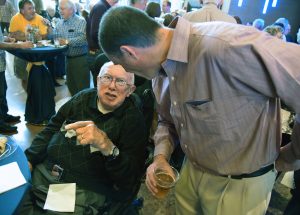 John Goldcamp (right) of Northbrook says hello to Fergal “Pat” Gallagher, of Grayslake and past president of the Lake County Council of the Navy League of the United States. Goldcamp served in the U.S. Army as a sergeant during the Persian Gulf Operation Desert Storm from 1989 to 1993. Gallagher served overseas in the early years (1965) of the war in Vietnam.

The documentary “Heroes On Deck: WWII on Lake Michigan” was premiered at the ArcLight Cinemas followed by the annual  “Taste of the Glen” May 22 at 1850 Tower Drive in Glenview’s The Glen.

The sold-out reception included 766 guests who came out on an early Sunday evening to see a complimentary premiere screening of a public television documentary from filmmakers John Davies, Harvey Moshman and Brian Kallies.

The film explores the stories behind military planes submerged in Lake Michigan, many of them connected with Naval Air Station Glenview heritage. 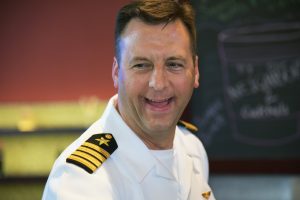 “I really wish the village had recognized the significance of Naval Air Station Glenview a little bit sooner and made provisions for it to be a museum.

The premiere launched a $5 million grassroots fundraising drive to finance construction of a permanent museum, which will be named The Naval Air Station Glenview Museum and Flight Academy. 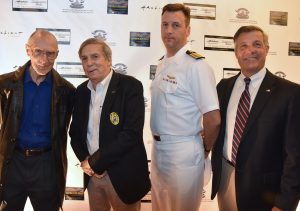 More than $11,000 was raised in pledges, $8,000 in sponsorships and $5,000 in donations, totaling more than $25,000, kickstarting the new museum’s official fundraising effort, said Tamara Taylor Holmes of Glenview and fundraiser spokesperson.

“I think telling the history is an important story to tell.

“There are a lot of folks who care about the Navy and that’s a beautiful thing,” Hawkins said.

“We can never forget our past,” Hawkins said. 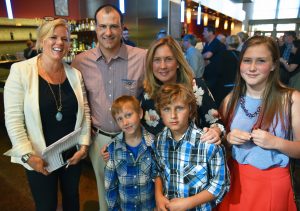 Tamara Taylor Holmes (left) of Glenview is with John Goldcamp of Northbrook with his wife Stephanie Goldcamp and the Goldcamp children, from right, Liz, 13, a Northbrook Junior High School seventh-grader, Jack, 11, a Westmoor School fifth-grader and Charlie, 8, a second-grader, also at Westmoor School.

Judy Hughes of Northbrook, Northbrook Historical Society president, has lived with her family for years in a home in central Northbrook, which was on a flight path of Naval Air Station Glenview aerial activity.

“We miss it,” said Hughes, who grew up residing in Evanston, Skokie, Glenview and Wilmette.

“My father was a pilot here so it’s important to me.

Other guests noshing on fare from several local restaurants caught up with neighbors or met new friends.

John Goldcamp of Northbrook said hello to Fergal “Pat” Gallagher, of Grayslake and past president of the Lake County Council of the Navy League of the United States.

Goldcamp served in the U.S. Army as a sergeant during Operation Desert Storm from 1989 to 1993. Gallagher served overseas as a medic in the early years (circa 1965) of the war in Vietnam.

Gallagher said he was asked to return to Vietnam during his military career. 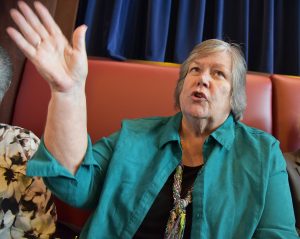 Judy Hughes of Northbrook, president of the Northbrook Historical Society, shares her memories of Naval Air Station Glenview before the film screening.

“It was horrible enough that I didn’t care to go back, ’65 was the beginning of the war,” Gallagher said.

“And it was already bad enough.

“I saw the writing on the wall.”

“The Navy is an economic powerhouse.”

Goldcamp, was an Arlington Heights-based reservist upon his return from the Persian Gulf until 1996. He came to Naval Air Station Glenview during that time as a color guard member. 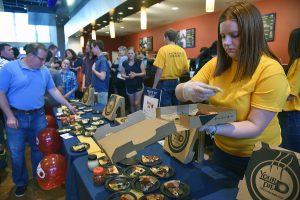 “We (his family) used to come here from Barrington and sit where Costco (2900 Patriot Boulevard) is now and watch the planes land,” said Goldcamp, a 1988 Barrington High School graduate.

Goldcamp brought his family to the screening. He and wife Stephanie Goldcamp have three children, Liz, 13, a Northbrook Junior High School seventh-grader, Jack, 11, a Westmoor School fifth-grader and Charlie, 8, a second-grader, also at Westmoor School. 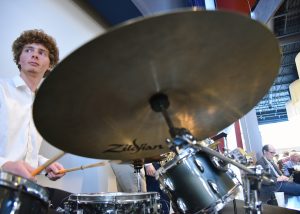 George Tantchev, 18, of Glenview and a Glenbrook South High School senior, performs on drums with the high school’s jazz combo.

“It’s great to help a cause like this,” John Goldcamp said.