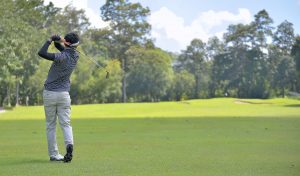 Illinois golf courses officially reopened on May 1, much to the delight of both hardcore enthusiasts and casual players sidelined since fall.

But a return to the fairways has a catch as the state confronts a COVID-19 virus outbreak that still shows little sign of abating.

“I would like to think that having some golf is better than no golf at all,” said Rory Spears, a longtime golf industry observer and host of the weekly “Golfers on Golf” radio show on WCPT-AM 820.

“I’m just hopeful that golfers can be patient and deal with the hand we’ve been dealt. Maybe we get past Mother’s Day and every week or two (Pritzker’s) office will throw golfers and the industry a bone here and there and we’ll eventually get (back).”

Courses reopened “under strict safety guidelines provided by the Illinois Department of Commerce and Economic Opportunity and when ensuring that social distancing is followed,” according to a statement.

A two-page list of guidelines contained 33 specific restrictions for course operators and golfers.

The new regulations call for twosomes only, no caddies or carts (except for people with disabilities) plus 15-minute intervals between tee-times. Bookings can only be made online or via telephone.

One Chicago area course offered these rules for access.

“All rounds must be prepaid and booked online before your round,” according to the website of Aurora’s Orchard Valley Golf Course. “Only annual members can call to book a tee time. No walk-ups or phone reservations of any kind will be accepted.”

Further, state guidelines call for clubhouses, pro shops, sit-down restaurants and bars to remain closed while only takeout food service is available. Practice ranges and putting and chipping greens are also closed. Indoor events or outside tournaments are prohibited.

Orchard Valley made it clear that all safety guidelines must be followed.

“All rules, including but not limited to social distancing, are non-negotiable,” according to a list of frequently asked questions. “If you do not follow the rules you will be asked to leave the property. Compliance is mandatory. We are very serious about safety and no exceptions will be made.”

For the most part, the new guidelines are also fine for one regional golf governing body.

“We do agree with the vast majority of the regulations,” wrote Robert Markionni, Chicago District Golf Association executive director, in a letter. “There are only a few that we feel are too restrictive. It is our belief that golfers will take safety first and utilize common sense when it comes to social distancing, adapting to the new rules and playing in a safe environment.”

The limitations could result in a financial hardship for many courses who’ve already lost a month of limited warm weather seasons. For example, spreading out tee times might prevent crowding at tee boxes but it also limits the number of customers on a course.

“The terms that (Pritzker) allowed courses to reopen under, for the most part, it’s not a great scenario for the golf courses making any money,” Spears said. “Being allowed to reopen only to a point where you still might lose money or on a good day you might break even is nothing special.”

Spears is also a longtime Chicago area radio sports journalist. His “Golfers on Golf” show returned to the airwaves for the season Saturday with a new home station. WCPT (820 AM), based on Chicago’s Northwest Side, also live streams the current shows while past programs can be found at www.golfersongolf.com

The rescheduled John Deere Classic is July 9-12 in the Quad Cities. The big one — the BMW Championship — is set for Aug. 25-30 at Olympia Fields Country Club, one week later than originally planned after the PGA revamped its tour schedule in response to COVID-19 concerns and closures.