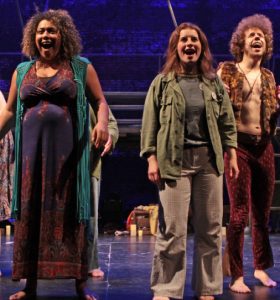 At the heart of “HAIR!”, the iconic, 1960s counterculture-era rock musical currently being staged at the Metropolis Performing Arts Centre, in Arlington Heights, is the story of a tribe of hippies, united by a philosophy of peace, love and understanding during a tumultuous time in American history.

Quite by happy accident, the Metropolis production includes three performers — Abby Vombrack, Alex Levy and Leah Davis — and the show’s director, Lauren Rawitz, with their own common bond, rooted as fellow residents of Buffalo Grove and developed in theater at Stevenson High School, in nearby Lincolnshire.

Rawitz, Metropolis’ Resident Director, has been affiliated with Stevenson for 20 years, serving as theater director and as co-sponsor of the school’s Co-Curricular Theatre Clubs. Vombrack, 26, and Levy and Davis (both 22), all performed in productions at Stevenson before continuing to work in theater at the college level and beyond.

The trio of thespians were first cast together in an Up and Coming Theatre production of “American Idiot,” in 2015, while Rawitz directed Vombrack in “RENT” at Metropolis in 2016.

“It’s a gift for me to work with them — to see them all college graduates and pursuing professional careers,” Rawitz said. “It’s exciting for me to reconnect. What an honor it is to work with someone I know from the past in a professional environment — and a deep sense of pride. I’m proud of the work they’re doing and the people they’ve become.

“By chance, they all auditioned for ‘HAIR!’ But there were no specific favors. In the professional world, you have to work even harder to show me you’re the right person for that role. When they walk in the room, years have passed, and they’ve all grown as artists — as have I — and that creates a different atmosphere.” 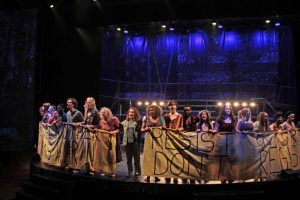 Vombrack, who plays the character of Sheila in “HAIR!” and also works full-time at Metropolis as Education and Community Engagement Coordinator, said, “There’s something comforting about knowing each other. Anytime you have a shared experience, it unites you in a way. But it’s more the work that unites us than growing up in the same town.

“We have insight into the integrity of each other’s work — kind of like speaking the same language. You understand the way someone works when you’re familiar with one another. You can explore different ideas, knowing the way they work, and the ferocity of their passion for doing the work. That inspires me even more.

“And they’re fun people to be around. We can all laugh together, and joke around, and that kind of gets you through the intense stuff.”

Levy, who plays Berger, said that reuniting with Rawitz (who directed him in “12 Angry Jurors” and “Sweeney Todd” at Stevenson), Vombrack and Davis in “HAIR!” is, “a dream come true.”

“I think we all saw ‘HAIR!’ as an audition opportunity, and it just so happened that we’re in it all together,” Levy continued. “But thank God for that. It’s been a memorable experience. The familiarity totally helps. With a show like ‘HAIR!’, you have to be really comfortable with each other. You really need that level of trust, and I absolutely have that with Lauren, Leah and Abby.

“And it helps that we’re all great friends. There’s no stage of, ‘I have to get to know you now.’  I’ve had that with them for years, so it’s much easier and much more fun that way. It’s 100 percent about relationships on stage. In ‘HAIR!’, it’s a family — a tribe of hippies — so being friends in real life, it’s like we’re not even working on stage … just kind of being, which is beautiful to me.” 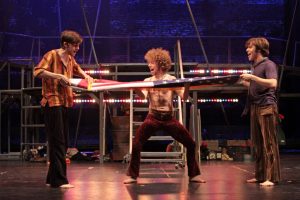 Alex Levy (center), who plays Berger, said that reuniting with Director Lauren Rawitz (who directed him in “12 Angry Jurors” and “Sweeney Todd” at Stevenson High School), Abby Vombrack and Leah Davis in “HAIR!” is, “a dream come true.” (Photo by Ellen Prather)

Davis (Jeanie in “HAIR!”) said the experience of joining Levy, Vombrack and Rawitz in the production has been equally gratifying.

“It’s hard to put into words,” said Davis, who also performed with Levy in “Sweeney Todd.” “We’re all friends — coming in and going out of it — so we have this community together. It’s exciting that we all come from the same place, worked together before, and here we are again.

“We’re at a professional level now, but with Lauren directing, we’re given much of the same treatment as high school. She treated us as a partner in the work then, and now even more so. I forget I’m working sometimes!”

Vombrack said, “With Lauren as director, she tries to bring a safe space, an environment where you feel you can be honest with her. Also, she’s a pleasurable human to be around. And if you find the space to enjoy yourself, you’ll feel freer, and the job is more fruitful.”

Levy agreed, adding, “She really is an actor’s director. She takes as much time as she can so everyone has their own journey on stage. I very much respect her vision. It’s well thought-out, and that brings truth and power to the pieces she does.”

That combination of factors is exactly what Rawitz has in mind when casting any play.

“As a director, I have a vision and a structure, but also the freedom to let the characters grow,” she said. “In the audition process, I need someone to show me the heart … someone I can believe in and tells the story in the most honest and vulnerable way.”

In preparing for “HAIR!”, Rawitz made sure that her young cast was well-informed regarding the Vietnam War, the subsequent hippie movement, and the true meaning behind the musical’s famously controversial nude scene that is part of the Metropolis production.

“We researched everything that went on during that time period — hundreds of pages of research, and we even had a helicopter pilot from the Vietnam War come in,” Rawitz said. “The nude scene, we had many talks about that. I said nobody has to do this, but here’s where the nudity comes from — at a ‘be-in,’ a protest. And everyone agreed that it was very powerful … that it comes from the emotion of the moment. It’s not just hippies getting naked, but more coming from a protest and what would trigger that.”

Levy said, “The nude scene, we were given the option to not do it. But we decided we had to do it. The nudity shows we’re just people fighting together for a cause. We’re sending out a message. It’s just part of the storytelling. You treat the nudity as a costume, and the costume is yourself.” 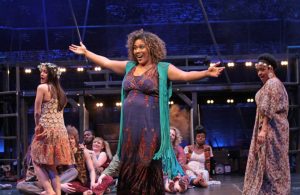 “Alex, he’s fearless — uninhibited,” Rawitz said. “He throws himself into the role, always asking questions and exploring as an actor. Abby, she can tap into an emotion and make you feel anything. She can wrap herself around the truth and emotion. Leah is magnetic. She has this energy about her. You just follow her on stage.

“And all three have this tremendous work ethic. They’re creative, searching for a deeper truth. But I feel, as individual actors, they’d bring the same thing to the table — Buffalo Grove connection or not — the same qualities, the same work ethic, the same amount of trust.

“But I will say this: Being from Buffalo Grove, and the surrounding suburbs, we’re fortunate to have schools that support the arts. And with my previous experience with them as a director, I hope I established a strong work ethic, and a freedom to explore.