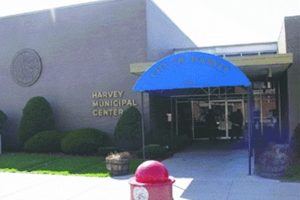 Federal agents raided both Harvey City Hall and Police Department in early March, leaving both buildings with boxes of records.

Two of the defendants facing federal charges in connection with alleged corruption in south suburban Harvey have pleaded not guilty.

Donald Luster, 55, of Dixmoor, and Will Wiley, 56, of Harvey, both appeared in federal court April 4 on charges of conspiracy to commit bribery.

Luster, appearing in a gray suit, and Wiley, appearing in a Nike sweatshirt, bomber jacket and blue jeans, before federal Magistrate Judge Maria Valdez, both waived formal reading of the charges against them and both said they understood the possible sentencing, if convicted.

Luster worked as a private consultant for Harvey. In 2017, he agreed with Wiley to solicit bribes from an entrepreneur who owned a towing company in a nearby town, federal authorities allege. In exchange for the bribes, Luster would provide the entrepreneur with a lease to a parcel of land owned by the city of Harvey, federal officials said.

Unbeknownst to Luster and Wiley, the entrepreneur was cooperating with law enforcement officials and had agreed to make recordings of conversations and meetings with the pair, U.S. attorneys contend.

In a recorded 2017 meeting, the entrepreneur paid a bribe of $5,000 to Wiley, the federal complaint states. Shortly thereafter, a Harvey employee provided the entrepreneur access to the parcel of land, federal agents state.

In 2018, the entrepreneur delivered a $7,000 bribe to Luster after which the city employee advised the entrepreneur that he could continue to access and use the parcel, U.S. attorneys said.

An official lease was never provided to the entrepreneur, the complaint states.

A status hearing on the cases against Luster and Wiley is scheduled for April 29.

Wiley was late appearing in court Thursday, detained in the lobby of the federal courthouse in Chicago because he did not have identification with him. Valdez admonished him for the lack of preparation.

“An ID is needed to get into a federal building,” Valdez said.

Luster and Wiley are two of the six men charged in a federal corruption probe in Harvey.

Among those charged are the brother and cousin of Harvey Mayor Eric Kellogg, both of whom allegedly extorted money from a strip club owner.

Federal agents raided both Harvey City Hall and Police Department in early March, leaving both buildings with boxes of records.

The U.S. Attorney’s Office noted that the Harvey Police Department is cooperating in the investigation.

Rommell Kellogg, 66, and Corey Johnson, 63, both of Harvey, are charged with conspiracy to commit extortion. They are scheduled to appear in court April 17.

From 2012-16, Kellogg, brother of the mayor, and Johnson, the mayor’s cousin, conspired to regularly extort payments from a Harvey strip club owner based on threats that the city would shut down the business if the payments were not made, the complaint states. The charges allege that in exchange for the payments, city officials allowed the business to operate, knowing that acts of prostitution were occurring at the site.

Harvey police officers Derrick Muhammad, 70, of South Holland, and Derrick Moore, 48, of Blue Island, are charged with obstruction of justice and conspiracy to obstruct justice. A grand jury returned indictments April 4 against the two officers.

Muhammad and Moore allegedly worked together to falsify a police report to protect two acquaintances from possibly facing federal charges. The acquaintances — a father and son — were convicted felons who could not legally possess a firearm.

In March 2018, the operator of a Harvey-based towing company notified Muhammad that a stolen IWI Uzi firearm was discovered in a Chrysler 300 sedan that had been reported stolen and ordered towed by police in nearby Calumet City, federal officials contend. The sedan was used by the father and had recently been driven by the son. Muhammad and Moore allegedly schemed to conceal the firearm’s connection to the pair, making sure the firearm “ain’t come back on nobody.”

Moore prepared and filed a false police report stating that he discovered the weapon in some brush near the towing company “while on patrol,” the charges allege.

The Federal Bureau of Investigation said anyone wishing to inform law enforcement of suspected corruption in Harvey should email harvey.info@fbi.gov.