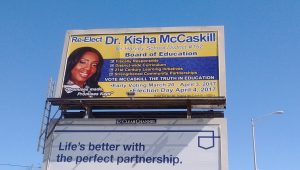 Dr. Kisha E. McCaskill is visible on a 159th Street billboard advertising her re-election campaign for vice president of the Harvey SD 152 School Board.

Where she’s less-visible, board members say, is at her full-time job as executive director of the Harvey Park District, where her husband Anthony McCaskill is board president.

Kisha McCaskill was paid $67,700 for the executive position by the Harvey Park District in 2016, according to records filed with the Illinois Municipal Retirement Fund. But during the 2015-16 school year, McCaskill — under her maiden name Kisha Hart — was also paid as salaried, non-certified staff an amount up to $40,000 for another job as human resources director, 21 miles from Harvey at Bellwood District 88. She is supervised by a relative, Supt. Rosemary Hendricks.

Hendricks has been criticized for hiring her two daughters at the cash-strapped district: Brittnay Atkinson was hired in 2016 for $70,000 a year as a student service coordinator and Jocelyn Hendricks, as a district nurse for $78,500.

McCaskill declined to answer questions about her double-shifts in Bellwood and Harvey, directing reporters to the Park District attorneys Del Galdo Law Group in Berwyn. An attorney for Del Galdo said he could not discuss personnel matters regarding his clients.

Embattled Hendricks is on her third round as superintendent of D88, having been let go in 2007 and 2010 and then rehired. The district has had high turnover in the top job: Nine superintendents have been hired since 2001.  In January, the D88 school board approved an extension of the superintendent’s $180,000-a-year contract.

“We have a lot of people from Hazel Crest, Harvey and the South Suburbs that have been hired by Mrs. Hendricks,” said Deborah Giles, a newbie candidate for SD 88 school board. “A security firm, bus drivers, why can’t we hire people from our area for these contracts?”

“We don’t see much of [McCaskill] in Bellwood either,” said D88 board member Dorothy Clark Smith.

McCaskill and her husband are a Harvey “power couple” who have been involved in local politics on the school board, park district, and even at the city council level. Anthony McCaskill, park board president, has run for mayor of Harvey and for alderman, losing both races.

This election season, both McCaskills were busy challenging the petitions of candidates running against them for park district board and school board. Anthony McCaskill’s challenges knocked three challengers off the park district ballot: Claude Davis, Jr., Donkor “Booman” Parker and Dwayne Franklin.

McCaskill attempted, but failed, to challenge the candidacy of Kenneth Anderson. McCaskill claimed Anderson really lived in Matteson, not Harvey, and had two felony convictions. According to Cook County Electoral Board documents, Anderson said his ex-wife lived in Matteson, and he shared a Harvey residence with his brother. The Electoral Board ruled that Anderson’s felonies had not been presented in the original objection, and hence were not binding.

Anderson pled guilty for a 2015 unlawful use of a weapon charge and received two years probation, according to the Electoral Board. In 2009, he was convicted of possession of a controlled substance and received one year probation.

Sinwelski said attorney fees were expensive to pay for and attending hearings on the challenges himself often conflicted with his job. He said the challenges were a waste of time.

“It’s just silly,” he said. “I’m just an average person. I’m not hiding anything. They make it difficult for people who want to run.”

Sinwelski later wrote in a text: “Harvey voters deserve honest reliable community members to lead our schools to success. We need to watch every penny and make sure we are hiring the best people for our children.”

Meanwhile, on the park district board, Moore claims that McCaskill and her husband do not communicate with her and have meetings of the five-member board where she is not included or notified.  She said the president and the park district director being married also concerns her.

“If it’s not right,” she said, “Mrs. Moore will not be a part of it. It’s a big conflict of interest and it’s nepotism and when I brought it up they treated me really terrible. I’m only one vote.”

She claims the senior group could no longer use park district facilities for senior activities that usually free to those who participate after the McCaskills came into power.

“They kicked us out the park district because they wanted to make us pay and we are feeding seniors for free,” she said. “We have to be on our best behavior if we want to use the banquet hall for anything. They want us to pay to use the building and we don’t have any funds.”

She said family and friends are the only ones who benefit from the McCaskills.

“If you are not in their friends or their family you are out,” she said. “That’s how they run it. It’s a shame.

“I know everything they are doing is wrong,” Thomas said. “It’s wrong for him to be the president and wife to be the director.  It’s a conflict of interest. Now I found out she is working another job and now that’s ghost pay rolling.”

Read the current edition of the Cook County Chronicle