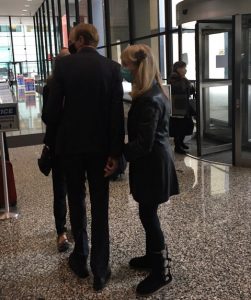 The Oak Park woman convicted by an Indonesian court of the 2014 murder of her mother while on vacation in Bali will be spending her holidays back in America in federal custody.

Heather L. Mack, who served a little over seven years of her 10-year murder sentence before being released last week by Indonesian authorities, was ordered detained on Wednesday, Nov. 10 by federal Judge Charles Norgle.

The judge ruled after attorneys for both the defense and the prosecution told the court they had agreed to her waiving her right to a detention hearing and remaining in custody.

Mack, who has been held at the maximum security Metropolitan Correctional Center in downtown Chicago since her arrest at O’Hare International Airport a week ago, appeared in court masked and in an orange jumpsuit and ankle shackles, her hair pulled tightly into a pony tail. As she waited for the judge to enter the courtroom, she looked around briefly twice, at one point appearing to glance over at her late mother’s brother and sister.

At her arraignment Nov. 3, Mack pleaded not guilty to U.S. federal charges of conspiracy to kill in a foreign country, conspiracy to commit foreign murder of a U.S. national and obstruction of justice. Mack will next be in court on Jan. 18 at which point the court may be asked to grant her bail.

Mack’s former boyfriend, Tommy Schaefer, remains imprisoned in Bali, serving out an 18-year sentence for his part in Sheila Mack’s murder. He was also named in the 2017 indictment unsealed Nov. 3 after Mack’s deportation to the United States.

Judge Norgle also notified attorney Keith Spielfogel that he had been formally appointed to be Mack’s defense attorney.

“Debbi and I are incredibly relieved and appreciative that this decision was reached today,” Bill Weiss said of Mack’s continued incarceration. He thanked the Chicago media for being “ethical, compassionate and thorough in its coverage of their sister’s murder and the trial, adding that they both admired local media’s “integrity and balance while reporting a story that has been sensationalized around the world.”

Weiss also thanked the FBI and U.S. Justice Department, which, he said, have “allowed us to obtain real justice for our dear Sheila.”

“As difficult as this is for Sheila’s family and all of her friends, we are pleased that Sheila will finally have her day in court.”