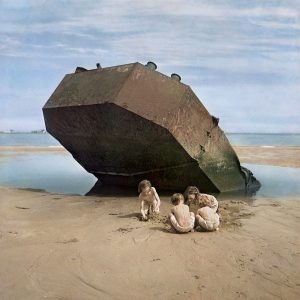 Illinois Holocaust Museum will host “Chim: Between Devastation and Resurrection”, which shines a light on the often-overlooked details of the aftermath of World War II.

The exhibit presents the postwar reconstruction of Europe, European elections, the effect of the war on children, the birth of the new State of Israel, and the Suez Crisis with over 50 photographs by preeminent 20th-century photojournalist David Seymour, also known as Chim.

Though framed by the destruction and devastation of war, Chim’s work focuses primarily on ordinary people and the intimacy of their daily lives. With images ranging from school children waiting for the bus amidst the ruins of the destroyed Warsaw ghetto to a woman watering her tomato garden amid the ruins of her building, his images offer a glimpse into life after destruction and loss as the rubble of war became the foundation of postwar Europe.

“Chim was one of the most accomplished America photojournalists of the 20th century and yet not many people know his background,” said Arielle Weininger, chief curator of Collections & Exhibitions at Illinois Holocaust Museum. “This is someone who intimately knew Europe. As a Polish Jew, he was forced to flee his home, his family was murdered in the Holocaust, and now he’s sent back to document the destruction of Europe. His life story shows through his work.”

Born Dawid Szymin in Warsaw in 1911 into a family of publishers specializing in Hebrew and Yiddish literature, Chim — who after World War II published under the name David Seymour — began his career in 1933 photographing for leftist magazines in Paris and covered the Spanish Civil War in 1936.

Back in Paris, Chim faced terrible prospects as a Jew, a foreigner, and a leftist and escaped France for New York in 1939. 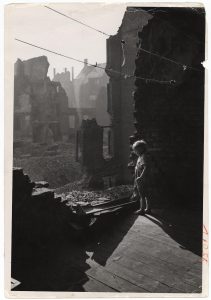 In 1942, he enlisted in the U.S. Army, using his photographic abilities and his ability to speak six languages to qualify as a photo interpreter in the Aerial Photographic Interpretation Detachment. After WWII, Chim co-founded the Magnum photo agency with Henri Cartier-Bresson, Robert Capa, and George Rodger. In 1948, he was commissioned by UNICEF to photograph the war’s effect on European children.

This project, “Children of Europe,” was published by LIFE magazine and in book form – many of the photos in Chim: From Destruction to Resurrection come from this project. Chim’s remarkable career was tragically cut short when he was killed by sniper fire while on assignment in 1956 during the Suez Crisis.

“Chim: From Destruction to Resurrection”  is excerpted from We Went Back: Photographs from Europe 1933-1956 by Chim, organized by the International Center of Photography and made possible by the John and Anna Maria Phillips Foundation and National Endowment for the Arts.

Illinois Holocaust Museum & Education Center honors the Survivors and victims of the Holocaust and transforms history into current, relevant, and universal lessons in humanity.

The museum is open Wednesday through Sunday from 10 a.m. through 5 p.m. For more information, visit www.ilholocaustmuseum.org or call 847-967-4800.