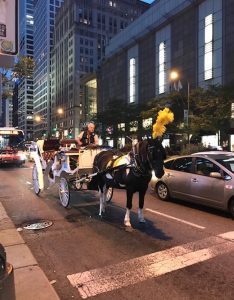 A horse carriage driver heads down a Chicago street during a summer evening. Horse carriages will be banned from city streets as of Jan. 1. (Chronicle Media file photo)

Animal rights activists are cheering Chicago aldermen’s action that will take horse carriages off city streets as of Jan. 1.

“The Chicago Alliance for Animals is thrilled that Chicago officials finally saw how Chicago’s horse carriage operators refuse to self-regulate and banned this inhumane, archaic and dangerous relic before a human or horse suffers or dies from this unnecessary activity, like so many have in other cities,” said Jodie Wiederkehr, CAA executive director.

Second Ward Alderman Brian Hopkins’ proposed ordinance to remove the carriages from city streets had languished in the City’s Council’s License Committee for more than two years, mostly because of a lack of support for the measure from Ald. Emma Mitts (37th Ward), who is the License Committee chair.

In Friday’s vote, just four of the city’s 50 aldermen voted against the carriage ban. Voting against the ban were Mitts and Aldermen Pat Dowell (3rd), David Moore (17th) and Jeanette Taylor (20th).

Wiederkehr noted that horse-drawn carriages are increasingly being banned around the world with officials citing animal cruelty as a prime reason. She said Amsterdam’s horse carriage ban went into effect at the beginning of April; Montreal’s horse carriages are now off the streets; Istanbul recently passed a ban; and cities in Belgium, Chile and the Dominican Republic have recently announced similar bans.

“Chicago is a world-class city and doesn’t need to depend on animal exploitation for a vibrant tourism industry,” Wiederkehr said.

“This is a banner day for overworked horses in Chicago, who will no longer be forced to pound the pavement through extreme heat, thunderstorms or blizzards and who are often deprived of even a drink of water, as the Chicago Alliance for Animals has documented for over three years,” Newkirk said in a statement. “PETA and the CAA have supported this progressive ban every step of the way; and we have high hopes that this kinder, carriage-free city will influence others to follow suit, including New York – where a horse used for carriage rides died in Central Park earlier this year.”

People for the Ethical Treatment of Animals, with a motto reading, in part, that “animals are not ours to use for entertainment,” opposes speciesism, which is a human-supremacist worldview.

Debbie Hay, owner of Antique Coach – one of the three carriage companies operating in the city – told aldermen that claims about the horses not being cared for are untrue.

“They receive routine medical care,” said Hay, who has been in the horse-carriage industry for 38 years. “The carriage owners provide high levels of care. The horses readily accept affection when it is offered to them.”

Abused animals would be receptive to attention like that, she said.

Hay said carriage rides have been part of so many marriage proposals and weddings and continue to be a tourist draw.

“Carriage are a part of the Chicago experience,” she said.

Hay urged aldermen to allow the carriage industry to continue.

During an October email exchange with the Cook County Chronicle, Hay said that prior to animal rights activists ramping up their efforts in 2017, the Chicago carriage companies would only get about 10 citations a year.

“Animal activists for months stalked drivers and inundated (the city’s Department of Business Affairs and Consumer Protection) with hundreds of photos and videos at one time,” Hay said. “If you look at the violations, you can see that they are minor offenses. If you read the ordinance, you can see several contradictions. The ordinance is almost 40 years old and doesn’t work well for the city or the carriage industry.”

Hay said despite the antiquated ordinance, the carriage industry in Chicago had stepped up its compliance.

“We have only a handful of tickets this year,” she said during those October emails. “Compared to other transportation industries, we barely have any tickets.”