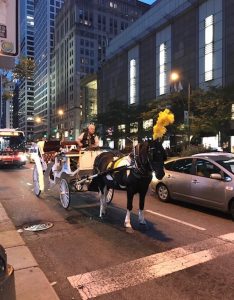 A horse carriage driver heads down a Chicago street during a summer evening. Efforts to ban horse carriages in the city have been bottled up in a City Council committee. (Chronicle Media file photo)

Horse carriages are poised to exist in Downtown Chicago for at least another year.

The lightning rod issue for animal rights activists continues to be stalled in a City Council committee and shows no signs of seeing the light of day anytime soon.

Without being passed out of the City Council’s Committee on License and Consumer Protection on Nov. 6, a proposed ban on carriage rides would not be before the City Council at its Nov. 13 meeting. Without City Council action, horse-carriage operators would get their licenses renewed at the end of the month.

As of press time, the proposed carriage ban was not on the Nov. 6 License Committee agenda.

While carriage owners tout the rides’ attraction for tourists, families and lovers, animal rights advocates say the horses are overworked and not cared for properly, and that the carriage owners continually thumb their noses as city regulations.

Ald. Brian Hopkins, whose 2nd Ward includes the Downtown area prime for carriage rides, has tried twice, unsuccessfully, to get carriages banned in the city. In 2018, the proposed ban got a hearing before the License Committee, but Ald. Emma Mitts (37th Ward), the committee chairwoman, tabled the issue saying she wanted to get more information from both sides.

One of the biggest supporters of the ban, Jodie Wiederkehr of the Chicago Alliance for Animals, said Mitts hasn’t sat down with her to get more information on the benefits of the proposed ban.

This year, Hopkins’ proposed another ordinance to ban horse carriages in the city, but it hasn’t even made a License Committee agenda despite being assigned to the City Council panel months ago and having 26 co-sponsors and 32 of the city’s 50 aldermen in support.

Wiederkehr said it is not Mitts this time, but Mayor Lori Lightfoot who is blocking the proposed ban from being heard.

“She’s blocked it at least three times now and is denying the democratic process from working in Chicago,” Wiederkehr said in an email to the Chronicle.

“This is so sad and pathetic as she ran a campaign on rooting out corruption and being transparent and progressive,” Wiederkehr said. “This is showing that she is none of those things by allowing horses to be overworked every single weekend and not requiring the city — Department of Business Affairs and Consumer Protection and Department of Animal Care & Control — nor the police to monitor this trade or enforce the clear animal welfare laws on Chicago’s books.”

A source told the Chronicle that a deal could be in the works that would give horse-carriage owners another year of operation in exchange for them finding sanctuaries for the horses and putting the equines in retirement.

Representatives of the Mayor’s Office did not comment on any such deal, only issuing a statement that said, “The city of Chicago is committed to ensuring all animals are treated with the highest standards of care and safety, which is why the Department of Business Affairs and Consumer Protection, and Chicago Animal Care and Control continue to work with aldermen, advocates and the industry to ensure current regulations are being followed and to understand any concerns as well as the impact of the proposed ordinance on our business community.”

If last-minute action is unable to get the proposed ban on the License Committee agenda, Hopkins could still make a move at the City Council meeting to try to get the issue to the council floor for a vote.

Called Rule 41, the procedure allows an alderman to bring legislation to the council floor without it having gone through a committee. The “Hail Mary” effort could be the only way to keep carriage licenses from being renewed again.

Debbie Hay, owner of Antique Coach — one of the three carriage companies operating in the city — said prior to animal rights activists ramping up their efforts in 2017, the carriage operators would get only about 10 citations a year.

“Animal activists for months stalked drivers and inundated BACP with hundreds of photos and videos at one time,” Hay said in an email.  “If you look at the violations, you can see that they are minor offenses. If you read the ordinance, you can see several contradictions. The ordinance is almost 40 years old and doesn’t work well for the city or the carriage industry.”

Hay said despite the antiquated ordinance, the carriage industry in Chicago has stepped up its compliance.

“We have only a handful of tickets this year,” she said. “Compared to other transportation industries, we barely have any tickets.”