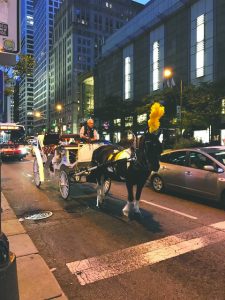 A carriage driver waits at a traffic light during a summer evening. All three of the city’s carriage companies have had their licenses renewed despite a number of citations being issued against them, city records show. (Photo by Patti Beese/for Chronicle Media)

Despite being cited for hundreds of violations and the majority of aldermen being against the practice, horse carriages are still rolling along Chicago’s Downtown streets.

All three carriage companies operating in the city have had their licenses renewed and are in good standing with the city, according to a representative of the city’s Business Affairs and Consumer Protection Department.

“How many times do you need to know they are violating the law?” animal rights activist Jodie Wiederkehr asked during a Chronicle interview. “How many times are they going to get their licenses renewed?”

Wiederkehr, leader of the Chicago Alliance for Animals, which monitors the carriages from public streets, said city leaders and the BACP wouldn’t tolerate other businesses having hundreds of citations against them. So why is it OK for the carriage companies to sidestep rules and regulations and remain on the streets, she asked.

“A restaurant that had this many citations would have a hard time staying open and would not get their license renewed,” Wiederkehr said.

The city issued 334 citations and fined the carriage companies more than $20,000 in 2017 alone, according to city records.

The leader of the Chicago Alliance for Animals said her organization continues to document — with video evidence — violations of the city’s regulations regarding the carriages, such as horses being worked well past the six-hour limit cited in city statues.

Wiederkehr said it is frustrating to basically do the BACP’s job for it and see no progress in getting carriages off Downtown streets.

“We have been doing the monitoring for two years and we have nothing but the city’s BACP personnel, Animal Control and the police ignoring us,” she said.

Because of concerns about the animals as well as potential traffic issues, horse-drawn carriages have been banned in some major cities. Wiederkehr is hoping to add her hometown, Chicago, to that growing list.

Wiederkehr noted that Thanksgiving weekend a Chicago police sergeant sent carriage companies back to their barns after the Alliance for Animals showed him documentation of the horses on the street close to double their allowed six hours of work. She said it was the first time police action was taken after a complaint by the animal rights organization.

The Chicago Police Department’s News Affairs Division confirmed that police responded to a call of a citizen complaint Thanksgiving weekend at the carriage stand at Michigan Avenue and Pearson Street, noting that “peace was restored” and that no police report was generated.

A spokesman for the division later confirmed that the sergeant who responded to the scene ordered the horses back to their stables.

Chicago Aldermen Brendan Reilly (42nd Ward) and Brian Hopkins (2nd) had led an effort to not renew the carriage license when they came due in December and had a majority of the City Council signed on as co-sponsors. It meant the aldermen only needed to get the issue to the council floor for a vote to be successful, barring any last-minute flipping on the issue.

Their efforts were stifled, however, when Ald. Emma Mitts (37th), chair of the Committee on License and Consumer Protection, tabled the issue, saying she wanted to get more information from both sides about the issue. That was back in September when a hearing was held on the issue and no additional committee hearings on the carriages have been held since.

Wiederkehr said she even went to one of Mitts’ Ward Nights trying to talk to her further about the carriage violations she has documented. After a brief conversation with the alderman, Wiederkehr said, she was asked to leave.

The carriage companies had been cited and fined for violations, but the firms made good on their debts before renewing their licenses, a requirement for license renewal, according to a representative of the Department of Business Affairs and Consumer Protection.

The department provided a statement saying:

“The department takes all complaints from the public seriously; each complaint is investigated and enforcement (tickets) are issued when a violation of the law is observed, and evidence supports probable cause. Tickets are adjudicated at the city of Chicago’s Department of Administrative Hearings and the burden of proof is a preponderance of the evidence.

“Over the past months, BACP obtained many complaints by animal advocates related to the horse-and-carriage industry during 2018 which were investigated and adjudicated. Persons who reported violations by horse-drawn carriage companies refused to testify at hearings after BACP prosecutors spent a considerable amount of time preparing for those hearings. Despite that, the city set its case, obtained hefty penalties, and the companies complied as required by law.

“The Municipal Code of Chicago grants the department authority to deny a license to an applicant who fails to meet the qualifications of the license. License issuance and/or renewal must meet compliance with all city laws at time of issuance, and the basis of license denial does not include complaint allegations or past violations.”

As of December, there were 17 active carriage licenses in the city:

Wiederkehr said despite frustrations with a lack of progress and the limitations of an all-volunteer crew, her efforts will continue.

“My life is dedicated to ensuring the humane and safe treatment of animals,” she said.