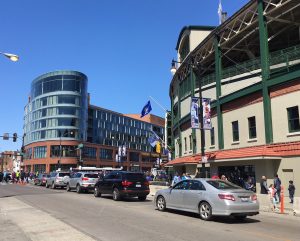 Staying at a Michigan Avenue hotel in Chicago affords one the thrill of stepping out their door onto one of the world’s great commercial and pedestrian ways.

Since the Hotel Zachary at Clark and Addison opened in early April, baseball fans near and far can now enjoy a perhaps even more special experience in the uniquely vibrant Wrigleyville neighborhood. Because what Cub fan, I ask, would not relish walking out of their hotel and seeing Wrigley Field towering right across the street?

Hotel Zachary is just the latest part of an ongoing transformation of the Wrigleyville neighborhood that has seen it become a drinking and dining destination that is both part of and apart from the baseball season.

The hotel, developed by Cubs owner Tom Ricketts’ family’s Hickory Street Capital, is named in honor of Zachary Taylor Davis. He is the architect who designed what was originally known as Federal League Ball Park, a 14,000 seat facility that was first home to the Chicago Whales baseball team in 1914.

The park became home of the Chicago Cubs when Whales owner Charles A. Weeghman and William Wrigley Jr. joined nine other investors to purchase the Cubs in 1916 and move them from their westside location to the new Weeghman Park. It became known as Wrigley Field in 1920, after Wrigley bought out Weeghman and his other partners.

The oft-renovated ball field, tripled in capacity, is now the second oldest ball park behind Fenway Park in Boston, and the only Federal League ballpark still standing. Hotel Zachary honors its designer, the Cubs, and the neighborhood that became Wrigleyville. That history is also honored and memorialized throughout the hotel’s public and private spaces. 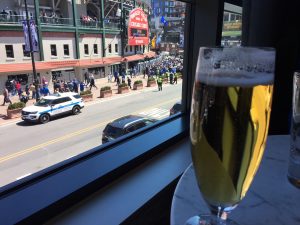 View of Wrigley Field from the second-floor lounge at the Zachary Hotel. (Photo by Bill Dwyer/for Chronicle Media)

“We started this project more than two years ago as part of our commitment to enhance the community and look forward to welcoming guests from distances both near and far to explore all that this neighborhood has to offer year-round,” Ricketts said in a press release.

The family’s pride of ownership is apparent in countless touches small and large throughout the hotel. One particularly tasty one is the plate of welcome cookies at the reception desk, each of which feature a dollop of chocolate embossed with the Hotel Zachary logo.

The most striking thing about the Zachary, to me, is its scale. It is a 173-room boutique hotel (including 20 suites), with a sense of being in someone’s very large and hospitable residence. And indeed, the interior design was inspired by Taylor’s early 20th century home and private studio.

There is no grand staircase or soaring lobby spaces, but rather, numerous comfortable spots throughout the second floor lobby bar area that allow small groups to relax over drinks and food.

The Zachary’s grandness resides in the small things, in the warm colors and tones throughout that reflect Zachary’s taste, in the artwork and artifacts and the woods, metals, brick and leather used.

The food at the hotel lounge on the second floor is simple but delicious. We shared a Zachary burger on a brioche bun ($16) and beers before heading over to the game. The accompanying fries were a perfect crispy outside and soft inside.

Over pre-dinner drinks after the Cubs’ cold and windy 3-0 win over the Milwaukee Brewers April 28, we sat back in chairs by the windows and picked at a soft pretzel, dipping it in sriracha pimento cheese and beer mustard ($9). Delicious.

As I watched the late game coverage (we left during the seventh inning due to the cold and wind) on the TV screens above the Zachary bar, I noticed there were no commercials between innings, just the Cubs logo on the screens. A bartender explained that the televisions are directly connected to the game feed from the network broadcasting the game, so there are no commercials. 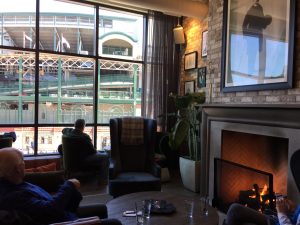 View out the windows of the small fireside lounge off the main bar at Hotel Zachary. (Photo by Bill Dwyer/for Chronicle Media)

Upstairs, the spacious and quiet standard rooms are well laid out, with a beautiful, understated interior design that celebrates both baseball and Wrigleyville. And the robes, by the way, are the most comfortable I’ve ever worn (and that includes my one memorable stay at a Waldorf Astoria).

Unlike the Waldorf, there is no in-room coffee service in the standard rooms, but guests can show their hotel key card for a free cup of very good coffee at the hotel’s West Town Bakery and Tap, located just inside the hotel’s front doors, where there’s a nice selection of pastries and breakfast croissants at very reasonable prices.

Did I mention that the bath towels are large and soft? They are.

Staying at the Zachary is not exactly cheap — at $358 (taxes included) for a standard, non-Wrigley view room in season, and more for the suites. But it’s an experience any Cub fan should want to aspire to. And many have already gotten the word. One couple we encountered by the elevators, happily draped in Cubbie colors and artwork, told us they were staying at the Zachary for the entire four-game Cubs-Brewers series.

And the spacious lounge area around the double sides bar was well populated by quite well-behaved Cubs fans during our stay.

Of course, just like in the real estate business, it’s “location, location, location” that matters with a hotel. And the Ricketts obviously appreciate the hotel’s unique location amidst the Wrigleyville environment.

The corner of Clark and Addison was the epicenter of arguably the greatest celebration in Chicago sports history, and the Zachary oversees both the iconic ballpark and intersection.

Most every other major sports venue in Chicago is effectively surrounded by “cordon sanitaires,” rings of commercially sterile blocks featuring little more than sprawling parking lots and long rows of buses. Wrigley Field is part and parcel of a busy, exciting urban neighborhood offering an array of choices besides the ball park and hotel. 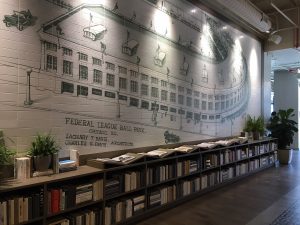 Hotel Zachary allows you to both venture out into that yeasty mix, and kick back in your room or settle into a comfortable chair on its second-floor deck off the hotel bar and watch the teeming masses below.

And ohhh, the views. No less than Conde Nast Traveller magazine calls the view of Wrigleyville from the Zachary “surreal.” Chicago Magazine terms it “killer.”

The word I’m using is “thrilling.” It is just plain cool to look down on the crowds milling about and entering the ball park; a thrill to first behold, and a quiet pleasure to sit and contemplate comfortably over a drink and a bite to eat.

A rooftop bar is scheduled to open in 2019. If the ambiance of the hotel’s second floor balcony is any indication, the rooftop will be a genuinely spectacular place.

None of the four restaurants associated with the Zachary are formally within the hotel, and the only outside restaurant directly accessible from the hotel lobby is Mordecai, an upscale grill and limited edition whiskey bar featuring rare, and very wonderful, and very pricey, Rip Van Winkle/Pappy bourbons of all ages.

At the north end of the block-long building, less than 100 feet from the hotel entrance, are Big Star (Mexican) and Smoke Daddy (BBQ), both One Off Hospitality restaurants. They were packed the Saturday we were at the hotel. We ate at Big Star and loved the chicken, fish and pork tacos, and Margaritas. And Queso Fundido. And the tequila specials.

What the hell, we weren’t driving.

Debuting in early summer will be Dutch & Doc’s, a 200-seat American brasserie at the south end of the hotel, on the northwest corner of Clark and Addison Streets. It’s run by the Boka Restaurant Group, of Girl & the Goat and Momotaro fame. 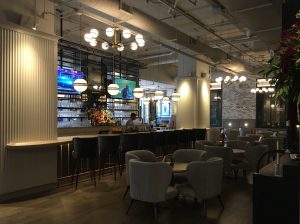 Underscoring his family’s commitment to operate a hotel that allows patrons to truly “explore all that this neighborhood has to offer year-round,” the Ricketts do not intend to see the Zachary be a six-month-a-year baseball operation.

While Wrigley Field and the Cubs definitely infuse the Zachary with a singular vibe, sports isn’t the only reason to stay there, even during the baseball season. One of Chicago’s iconic music venues, the Metro, is less than two blocks to the north at 3730 N. Clark Street, and the classic Vic Theater sits less than a mile south at 3145 N. Sheffield. And a three-mile Uber ride south on Clark Street takes you to Blues Chicago.

Here’s to you, Zachary Davis. Take a far-too-long-delayed bow, sir.

This is the first in a continuing series of stories highlighting destinations for one- to four-day getaways.