Approximately 200 vehicles took part in a May 24 social distancing parade to honor the memory of late Evanston restaurateur Hecky Powell.

Powell, founder of Hecky’s Barbecue in Evanston, died of complications from the coronavirus early Friday.

Powell opened his namesake restaurant nearly four decades ago, referring to Evanston on storefront signage as he beloved “E-Town.” 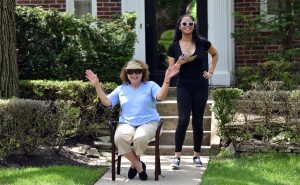 “It’s the Sauce,” became the restaurant’s famous slogan. The restaurant, which was closed on Friday, became a destination for people who wanted to place flowers and cards in the doorway. On Sunday, there were more flowers at the Green Bay Road location in growing tribute.

The parade on Sunday began at 2 p.m. outside of the Powell residence. Evanston Police escorted the parade, which had assembled at 1:30 p.m. at the Lorraine H. Morton Civic Center in Evanston.

It was a surprise meant for Powell’s spouse Cheryl Judice, who sat outside with her family on a sunny 84 degree Memorial Day weekend day and waved from a safe social distance to well-wishers who brought signage, balloons and flowers. 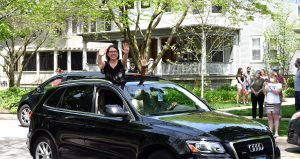 People stood inside their sun-roof sections to wave to the family. (Photo by Karie Angell Luc/for Chronicle Media)

Some passengers released their balloons as they drove by Judice and her family. Shiny heart mylar balloons were seen becoming caught in the branches of a mature parkway tree outside of the Powell residence.

A loved one of Judice’s sang a song from the passenger side of the car she was riding in.

“I love you Auntie Cheryl. You know I love you very much,” she said at the end of her song.

People wearing PPE masks also walked by to say hello. Neighbors across the street held posters and signage. Judice and well-wishers all seemed to agree they would have preferred hugs but COVID-19 prevented that.

“It’s just an amazing day,” Judice said as she sat in her chair.

“What a lovely, lovely tribute.” 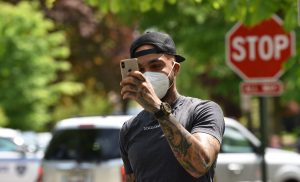 Hecky Powell’s son Jason Powell of Chicago, who grew up in Evanston and is a 2006 Evanston Township High School graduate, documents the parade with his cellphone in front of his father’s residence. (Photo by Karie Angell Luc/for Chronicle Media)

The late restaurateur started the Forrest E. Powell Foundation in honor of the memory of his father. According to http://forrestepowell.com, “Established in March 1994, the Forrest E. Powell Foundation has a mission to help people work to achieve their dreams. It supports hard-working individuals and believes anyone can become a success through commitment and proper training.”

Son Jason Powell of Chicago, who grew up in Evanston and is a 2006 Evanston Township High School graduate, documented the parade with his cell phone.

“My dad was the man and my best friend. It’s awesome to see all the love he’s getting.

The parade comes down the street to the Powell residence. (Photo by Karie Angell Luc/for Chronicle Media)