An estimated 200 volunteers built a new playground in one day on Sept. 14 at Winfield Scott Park (1800 South Maywood Drive) in Maywood.

The project was made possible by Let’s Play, a Keurig Dr Pepper (KDP) initiative that helps to make active play a daily priority among kids and families. “The community has really embraced this,” said Brad Allbee, regional vice-president of the Northlake-based sponsoring company. And I just think that is a feel-good right there.” 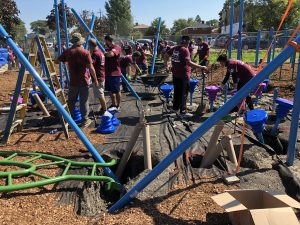 The Friday daytime collaboration was Let’s Play’s 100th build after launching the program in 2011 and the fifth build in the Chicago area.

“It’s always about the kids,” said volunteer Anthony Jefferson of Hillside. “I have two teenage sons myself so it’s always about the kids. And it’s going to be a great feeling seeing them play on this playground,” Jefferson said. The playground design was inspired by drawings from local children. The build included a kickoff ceremony and ribbon cutting to launch the addition for the village and the Maywood Park District.

“It feels great,” was overheard by an adult volunteer.

Denise McDermott of River Forest was among the volunteers besting sunny skies with temperatures climbing toward the humid 90s. 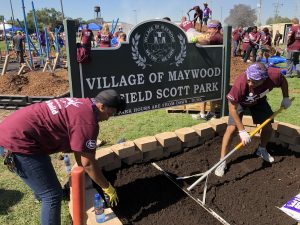 McDermott carried playground equipment consisting of a bright pinkish purple lily pad, which kids could use to hop from.

“What’s the power of a lily pad?” McDermott said with a smile as she held the soon to be installed lily pad. “It brings brightness and light and keeps everybody happy.”

“It’s amazing,” said Payton, as he put final touches on signage, which said, “Welcome to your Playspace!”

Jarrett Payton is a former professional football player and running back. 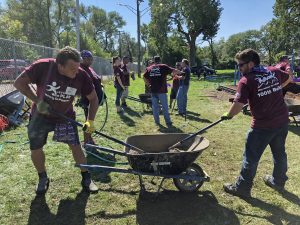 An estimated 200 volunteers came out for the Let’s Play new playground build in Maywood on Sept. 14. (Photo by Karie Angell Luc/for Chronicle Media)

“My dad would be super pleased because this is what he brought me up on, is, that you get a chance to be able to help impact somebody’s life or make somebody’s life better,” Payton said. “And I think kids in this area are going to have that opportunity by having this playground. So just to be able to team up with everybody here, with KaBOOM! and Keurig Dr Pepper, it is pretty special.”

Keurig Dr Pepper and its nonprofit partner, KaBOOM!, have assisted more than 11.5 million kids nationwide with more than $38.5 million through Let’s Play.

More than 80,000 volunteers across the country have engaged in efforts to provide underserved communities with new play spaces.

Since its launch, Let’s Play has provided more than 11.5 million children with opportunities to play via safe, accessible playgrounds and sports equipment. Keurig Dr Pepper is a coffee and beverage company in North America with annual revenue in excess of $11 billion.

The mission of the Maywood Park District is to promote the development of a comprehensive park system to ensure recreational opportunities and wellness for residents.

The Maywood public park setting also is welcoming to the greater community.

KaBOOM! is a national nonprofit striving to offer all kids, especially those living in poverty, a positive childhood through safe places to play.

KaBOOM! has collaborated with partners to build or restore more than 17,000 play spaces, engaging more than 1.5 million volunteers and serving more than 9 million children.

—- Hundreds of volunteers build a new playground in Maywood  —-