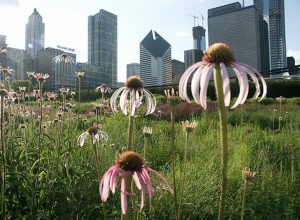 Cook County, being an environmental justice area, where low-income and minority populations can bear the burden of regional transportation decisions, is part of the reason that Cook transit projects will be considered first in the distribution of Volkswagen settlement funds. The Illinois Environmental Protection Agency is putting much more emphasis on on-road pollution mitigation efforts than it did in its initial plan. (Photo courtesy of Chicago Metropolitan Agency for Planning)

The IEPA’s final Beneficiary Mitigation Plan puts much more emphasis on on-road efforts to reduce air pollution than the agency’s draft plan did.

Just 28 percent of the VW funds will now go toward off-road efforts like locomotives, ferries and tug boats, according to the IEPA. Originally, the agency had planned to put 65 percent of the $108 million coming to the state in the VW settlement toward off-road projects. IEPA officials had argued that replacing locomotives and other off-road polluters would give the state the biggest bang for its bucks in improving air quality.

However, online and public comments continually called for the money to go toward electric vehicle infrastructure, electric buses and other on-road efforts.

IEPA officials said the goals in the final Mitigation Plan did not change, but that the public interest expressed in on-road projects did lead the state agency to put more emphasis on projects having on-road impacts.

Chicago area efforts to reduce air pollution will get the first crack at money coming from the settlement.

Public transit project in the Chicago area and an electric school bus pilot project in Cook County will vie for $20 million in funding from the state’s settlement with the German carmaker over cheat devices in some vehicles to improve emission test readings. Public transit companies and transportation providers have until Oct. 15 to submit their applications for funds.

Brad Frost, manager of the Office of Community Relations for the Illinois Environmental Protection Agency, overseer of the state’s chunk of VW money, said there are several factors for the Chicago area being a priority area for funding.

“It is an ozone non-attainment area; it has the highest population density; it has the most robust public transportation network in the state and one of the largest in the country; it had most of the illegal VW cars; and it has the largest number of environmental justice areas in Illinois,” Frost said in an email.

Ozone non-attainment areas are regions that do not meet the ground-level ozone standards established by the U.S. EPA in 2015. An environmental justice area is any census tract where 20 percent or more of individuals live in poverty and/or 30 percent or more of the population is minority.

The only other ozone non-attainment area in Illinois besides Cook County is the Metro East area outside St. Louis.

Frost said that more than 1,600 comments and 225 survey responses, along with public input at listening sessions, on the IEPA’s Beneficiary Mitigation Plan led to more money being directed at on-road projects.

Here is how the IEPA’s final Mitigation Plan for the $108 million differs from its original plan: