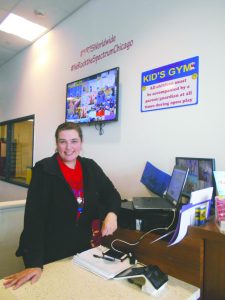 An indoor kids sports and recreation center in the northwest suburban Palatine is drawing families from all over the Chicago area.

They come from as far north as Gurnee, as far south as Orland Park and as far west as Naperville and as far east as Chicago — and for a good reason. Because, out of all the recreation centers, only We Rock the Spectrum gym is designed specifically to accommodate the needs of kids with the autism spectrum disorder.

The gym is the second Illinois location of the Tarzana, Calif.-based franchise. The idea isn’t just to provide a comfortable place for the kids on the spectrum, but to create an environment where the kids on the spectrum and more “neurotypical” kids can play together. The owners of the Palatine franchise said they have been gratified by the positive response they have received — and the difference they have been able to make in the lives of all families that step through their doors.

The National Institute of Mental Health describes autism spectrum disorder as a developmental disorder that results in difficulties in communication and interaction with people, as well as narrowly focused interests and repetitive behaviors. It is described as a spectrum because the way the symptoms manifest, as well as how severe those symptoms are, varies widely. The treatment varies as well, and usually involves some form of therapy and, in some cases, medication. The idea behind treatment is to help individuals on the spectrum to overcome communication difficulties and other issues that may hinder their ability to function in society while capitalizing on their strengths.

According to its corporate website, We Rock the Spectrum was founded by Dina Kimmel, an entrepreneur and a mother of two children. Her son, Gabriel, is on the spectrum, while her daughter, Sophia, is neurotypical. When she took her son to playgrounds and gyms, noise and other stimuli that wouldn’t bother other kids was too overwhelming, and he wound up having meltdowns. At the suggestion of her son’s occupational therapist, she turned her bedroom into a gym with specialized play equipment that was didn’t overwhelm the senses and helped kids improve their coordination and motor skills.

Kimmel soon discovered that not only did the equipment help Gabriel, but Sophie and her friends liked playing on, too. And when a local gym closed, she decided to take the idea to the next level. In September 2010, she opened what would become the first We Rock the Spectrum gym. It soon proved to be popular with autistic and neurotypical children alike.

In 2013, Kimmel decided to franchise the concept out. Her first franchisee, Gail Field, opened a location in Boca Raton, Fla., Since then, 60 locations opened across United States and throughout the world. But until October 2018, the Bloomington-Normal location at 1717 Fort Jesse Road was the only Illinois location. 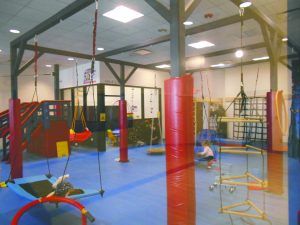 We Rock the Spectrum has play equipment designed to help kids improve their coordination and motor skills while they have fun. (Photo by Igor Studenkov/for Chronicle Media)

Husband and wife Hugh and Mary Alice Gilgunn, of Arlington Heights, set out to change that. According to their Special Use permit application, they had personal experience with special needs children. Mrs. Gilgunn worked as a speech therapist, which involved working with many kids on the spectrum, which, she wrote, made her a strong advocate for their interests. Mr. Gillgunn has an adopted sister with Down Syndrome. Their family tried to give her the education and therapy she would need to leave independently, and he supported her every step of the way.

The couple’s experiences made them want to do more — and they liked We Rock the Spectrum’s vision.

“I love the vision of inclusiveness that is [available] for all children,” Mrs. Gilgunn said. “I also love that the gym provides sensory input that’s so beneficial to sensory development.”

The couple chose Palatine because the village has several well-regarded public and private programs for children with special needs. Gilgunn cited Kirk School, a special education school where she worked in the past, as an example.

They settled on a space at 553 E. Dundee Road. The Palatine Village Council approved a Special Use permit necessary to open the school on May 7, 2018. While they originally hoped to open the Palatine location in August of that year, the grand opening had to wait until Oct. 13, 2018.

Gilgunn said they had 30 families on their first day. Since then, they have grown to around 1,300 families.

The gym is made up of a larger gym, a smaller play area in northeast corner, as well as an art room and a room specifically for babies and toddlers farther back. The longer, thinner room west of the main gym is used for private parties and dance classes. As Gilgunn noted, the principle of providing a welcoming environment for kids on the spectrum, with the lighting and volume lowered. And over by the front desk, parents can buy “sensory-based toys” — toys that are specifically designed to improve kids’ auditory processing and fine motor skills.

“There are definitely families that want to teach come out and teach their kids about inclusion and neurodiversity,” Gilgunn said.

In addition to offering a place to play during “open gym” hours, they also offer classes, including kids yoga, Zumba dance classes with parents and science classes. We Rock the Spectrum arranges meet-and-greets with actors playing popular characters, such as Elsa from “Frozen” animated film. Families can also rent out the gym for kids’ birthday parties, which, Gilgunn said, became surprisingly popular.

“We weren’t expecting that it was such a big draw, “she said. “We didn’t realize that it was going to be so important to families that we [can] close our gym to their private parties.” 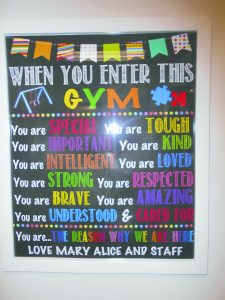 The list of We Rock the Spectrum rules displayed in the gym’s lobby. (Photo by Igor Studenkov/for Chronicle Media)

While We Rock the Spectrum is geared toward kids up to age 11, it does offer activities for other age groups. Gilgunn mentioned a painting party for teenagers. And on Feb. 22, she organized a Parents’ Night Out event,

As the weather warms, And We Rock the Spectrum will start offering day camps. During this spring break, they will offer a spring day camp where kids will “explore [their] sense” and develop language skills. They also plan to offer summer camps focused on science and camps focused on speech and language development.

During the course of the interview, Gilgunn stepped out several times to take care of some issues. And, as the interview wrapped up, one of the girls who was playing stepped in, because she couldn’t leave without saying goodbye to Gilgunn.

She said that she has two kids, 9-year-old Anthony and 6-year-old Grace. Both are neurotypical, she said.

Overall, Gilgunn said she and her husband are pleased that they were able to make an impact.

“Overall, it was the most heart-warming and humbling experience, just getting to know the families not as a therapist, but as a friend and a confidant,” she reflected. “It’s just been heartwarming. Every day, we can tell stories at home [about how] we have seen such growth [in] children. It can’t be put into words, really.”