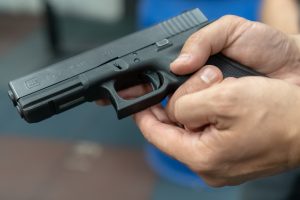 The Illinois Supreme Court struck down a Cook County tax on gun sales in an opinion released Thursday, Oct. 21. (Blueroomstream.com)

SPRINGFIELD – The Illinois Supreme Court ruled Thursday, Oct. 21 that a Cook County tax on gun purchases is unconstitutional, but it left the door open for a more tailored tax that specifically goes toward mitigating gun violence and its effects.

The taxes were challenged by the trade group Guns Save Life Inc. in a lawsuit against the county.

In the 14-page, 6-0 opinion, the Supreme Court reversed an appellate court ruling that would have allowed the taxes to stay in place. Chief Justice Anne Burke did not take part in the decision.

While the court rejected the tax, it did specifically note that the county’s failure to earmark the revenue from the tax for gun violence prevention programs played a major role in the decision.

It gave particular scrutiny to the question of whether the tax violated the uniformity clause of the Illinois Constitution, which states: “In any law classifying the subjects or objects of non-property taxes or fees, the classes shall be reasonable and the subjects and objects within each class shall be taxed uniformly.”

Citing previous court precedent related to that clause, the court wrote it had to determine whether the tax on guns “bears some reasonable relationship to the object of the legislation or to public policy.”

“Under the plain language of the ordinances, the revenue generated from the firearm tax is not directed to any fund or program specifically related to curbing the cost of gun violence,” the court wrote.  “Additionally, nothing in the ordinance indicates that the proceeds generated from the ammunition tax must be specifically directed to initiatives aimed at reducing gun violence. Thus, we hold the tax ordinances are unconstitutional under the uniformity clause.”

Justice Michael Burke agreed with the opinion, but issued a four-page special concurrence disagreeing with the majority’s analysis that the county’s spending plans affected whether the tax was permissible.

“The majority’s analysis is problematic because it leaves space for a municipality to enact a future tax — singling out guns and ammunition sales — that is more narrowly tailored to the purpose of ameliorating gun violence,” Michael Burke wrote.

He argued the majority opinion is leading the county “down a road of futility,” citing Article 1, Section 22 of the state constitution, which reads: “Subject only to the police power, the right of the individual citizen to keep and bear arms shall not be infringed.”

“The only problem with the majority’s approach — and the guidance it offers the county — is that such counsel, if followed, would still violate the provision of the Illinois Constitution noted above that plainly states that the right of the individual to keep and bear arms is subject only to the police power, not the power to tax,” he wrote.

“Thus, the majority is leading the county down a road of futility,” he added.

One major precedent cited by the court was from Boynton vs. Kusper, a 1986 Supreme Court ruling which struck down a $10 state tax on marriage licenses in certain counties that went to the Domestic Violence Shelter and Services fund.

The court said at the time the marriage license tax “directly impeded the exercise of the fundamental right to marry,” and should be subject to greater scrutiny.

The court ruled in the Boynton case that even though the $10 fee was “de minimis,” or small, if the court granted that authority, it would essentially mean “there is no limit on the amount of the tax that may be imposed,” according to previous case law.

The same argument can be applied to the gun tax, the court wrote, noting that a stricter level of scrutiny is needed because the tax applies to a fundamental right.

Given that necessary scrutiny, the court ruled the gun taxes unconstitutional.

“In applying that standard to the firearm and ammunition taxes, we recognize that the uniformity clause was ‘not designed as a straitjacket’ for the county … and acknowledge the costs that gun violence imposes on society,” the court wrote. “Nevertheless, the relationship between the tax classification and the use of the tax proceeds is not sufficiently tied to the stated objective of ameliorating those costs.”