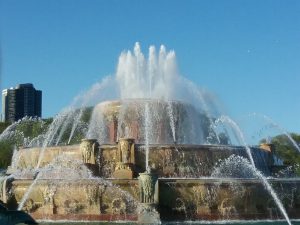 Buckingham Fountain is up and running for its 90th season. (Photo by Kevin Beese/for Chronicle Media)

Despite it being a day more conducive for wiping running noses than worshiping running water, the start of summer has unofficially been kicked off in Chicago.

The turning on of a Buckingham Fountain, long held as a sign of summer’s return in Chicago, was conducted May 6.

With a flip of a switch, Arlington Heights resident Marilyn Swanson started summer in the city no matter what the thermometer said.

With an air temperature of 55 degrees and a slight breeze, water shot out from the fountain shortly after 6 p.m. as the landmark began its 90th year of operation. Onlookers cheered, took photos, snapped selfies and simply marveled at the storied part of Grant Park as members of American English played the Beatles hit “Sgt. Pepper’s Lonely Hearts Club Band” from the nearby stage. 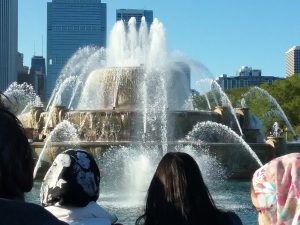 Onlookers watch as Chicago’s Buckingham Fountain is turned on Saturday. The fountain’s startup is seen by many as the unofficial start of summer in the city. (Photo by Kevin Beese/for Chronicle Media)

“This fountain is one of the most recognizable symbols of this great city,” said Steve Lux, chief financial officer of the Chicago Park District, who was on hand for the fountain’s start-up. “It is one of the most anticipated things in Chicago. It signals the unofficial start of summer.”

Ivy Elung and her son, Haden, were on hand for the festivities and enjoyed some free cotton candy while waiting for the fountain to start for the year.

“I saw that they were going to have kids’ activities here,” Ivy Elung said. “I figured it would be a fun thing to do so we decided to come by. We live close to here.”

Some facts about the fountain include: 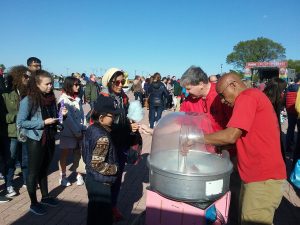 Ivy and Haden Elung get some cotton candy from members of A Moonjump Company before the fountain’s startup. (Photo by Kevin Beese/for Chronicle Media) 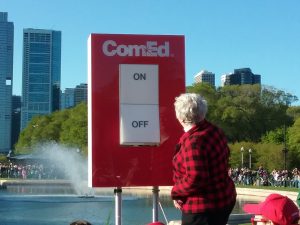 Marilyn Swanson of Arlington Heights turns on the fountain for the 2017 season. (Photo by Kevin Beese/for Chronicle Media)

Anne Pramaggiore, president of ComEd, was on hand for the switch being thrown to ignite the fountain’s 2017 season.

“This is the centerpiece of Grant Park in Chicago’s back yard,” Pramaggiore said of the fountain.

Swanson said being able to turn the fountain on was a dream come true. She received the honor by answering ComEd’s Safe Quiz question on Facebook and saying why she wanted to turn on the fountain.

“I’ve been coming here since I was a little girl so I thought it would be a great thing to do,” Swanson said of the bucket list item.