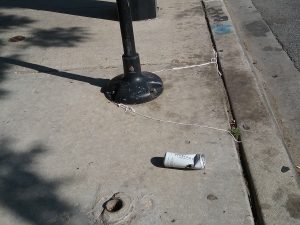 An empty can of Monaco, a mixed drink, is seen on the sidewalk near Halsted Street & Aldine Avenue in Chicago’s Boystown neighborhood. City Council members are slated this week to consider a ban on alcohol in single-serving containers — deemed 41 ounces or less — between midnight and 7 a.m. (Kevin Beese/For Chronicle Media)

David Dalka is tired of kicking the cans down the road — literally.

The resident of Chicago’s Lakeview neighborhood, who lives two blocks from Wrigley Field, said he trips on bottles and cans on the way to his car nearly every day.

“There is broken glass up and down the block,” the Roscoe Street resident lamented.

To aid residents around Wrigley and other parts of the city where revelers converge, city officials are considering a ban on single-serving alcohol from midnight to 7 a.m. Ald. Brian Hopkins (2nd Ward), a sponsor of the legislation, said the restriction would pertain to alcohol-filled cans and bottles 41 ounces in size or less.

“It is clear these individuals aren’t going home to drink,” Hopkins said of single-drink purchasers.

The restrictions would not pertain to individuals purchasing six-packs and cases of beer at liquor sellers in the city, items intended to be drunk at someone’s home.

The cans and bottles, often referred to as “single shooters” or “single servings,” have led to intoxicated individuals in and by stores, as well as trash on neighbors’ lawns, in party-happy neighborhoods of the city. They also are blamed for panhandlers in front of stores trying to score their next drink in other neighborhoods.

“We have panhandlers out drinking in the streets,” Hopkins said of the issue. “It’s disappointing because people are not able to go into a convenience store because individuals are drinking right there.”

Sam Sanchez, second vice chairman of the Illinois Restaurant Association, said his organization is in support of the ban.

“When a person buys a single beer, we know he is not going home to drink it,” Sanchez said. “We keep seeing it.”

Sanchez said bars and restaurants do an excellent job keeping their single-serving purchasers inside their establishments and not allowing them to drink in public. Package goods single-servings are not monitored and patrolled as closely, Sanchez said.

Members of the City Council’s License and Consumer Protection Committee unanimously approved the restrictions last week. The proposal will now go before the full City Council on Sept. 6.

Liquor sellers would face fines of $200 to $1,000 per violation. City officials note that liquor license revocation or suspension would also be possible as a result of a violation. 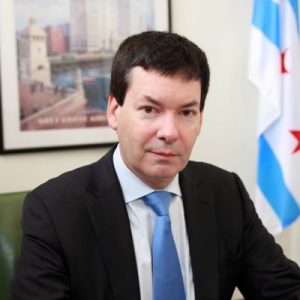 Shannon Trotter, local liquor control commissioner for the city, said instances will be judged on an individual basis.

“Generally, there will be discipline and license decisions based on the incident,” Trotter said. “It is not a case of three strikes and you are out.”

Dalka said he is in favor of the restrictions on single-sale alcohol, but fears that the legislation will be just another law on the city’s books.

“We have a lot of ordinances in the city, but not all of them are enforced,” Dalka said. “There must be a cost here.”

He said he regularly calls police now about unruly drinkers in the Lakeview neighborhood, but that it is only when he demands that a police sergeant be present that he gets any officers to show up.

“I’ve thought about a curfew (for alcohol sales) in the communities I serve,” Scott said. “There are a lot of bad actors on the package goods side.”

Agreeing with Dalka, the alderman said the city needs to be vigilant in instituting the single-sale restrictions.

“How do we enforce the laws on our books? How is the ban going to work in neighborhoods that might not be as amenable?” Scott asked.

Lawrence Foy, a senior citizen who lives near Addison and Halsted streets, said the restrictions would make it easier for seniors to get into their buildings late at night.

“Elders don’t turn into pumpkins at midnight,” Foy said. “We come home and there are people in the yards of senior citizens’ houses. People are on the corner standing with drink containers in their hands. It can be awkward for residents walking to their buildings.”

Ald. Michele Smith (43rd Ward) said her ward has a lot of newly engaged drinkers with DePaul University right there.

“We need the ordinance to protect homeowners from individuals overdrinking. Alcohol is well regulated by the hospitality industry,” Smith said. “I think it is an excellent ordinance.”