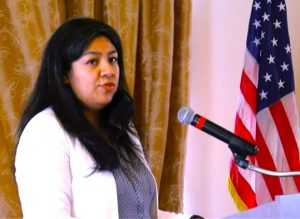 Angelica Guerrero-Cuellar, a 30-year resident of Chicago’s southwest side, is the first Latina to represent the 22nd House District. She was sworn in on Thursday, Feb. 25 after being voted in by the Democratic officials in the district. (Blueroomstream.com)

SPRINGFIELD — Former Speaker Michael Madigan chose a second replacement to fill the House seat he vacated last week after he publicly urged his first appointee to step down for “alleged questionable conduct,” the exact details of which remain unclear.

Angelica Guerrero-Cuellar was nominated by Madigan on Thursday, Feb. 25 during the brief meeting of the five Democratic committeepersons who represent the Chicago wards and Stickney Township within the 22nd District.

Guerrero-Cuellar, a 30-year resident of Chicago’s southwest side, is the first Latina to represent the 22nd House District, which has seen a dramatic increase in its Latino population since Madigan was first elected in 1971. Latinos now represent a majority of the district.

Guerrero-Cuellar was sworn in on Feb. 25 after the meeting concluded.

“Again, my focus and my motivation is to serve the community, and its residents of the 22nd District,” Guerrero-Cuellar said on Thursday. “I am very honored and humbled for this opportunity. Please know that I will be as transparent as possible. I believe that my life experiences can be relatable to the residents in this area.”

The committeepersons who represent Chicago’s 13th, 14th, 18th, and 23rd wards and Stickney Township are tasked with voting on candidates to fill vacancies in the 22nd House District.

Each committeeperson’s vote is weighted by population, and Madigan’s vote carries the most weight, as his ward includes more than half of the district’s population.

On Sunday, Feb. 21 Madigan voted for Edward Guerra Kodatt, an employee of Madigan’s 13th ward organization who was one of 10 candidates seeking the position.

Guerrero-Cuellar, who was nominated by Ald. Silvana Tabares of the 23rd Ward, received the second-highest number of votes because Tabares has the second-largest weighted vote.

Madigan and Ald. Marty Quinn, who represents Chicago’s 13th Ward, issued a statement on the night of Feb. 23 that suggested Kodatt resign, but the statement did not elaborate on the details of the “questionable conduct.”

“After learning of alleged questionable conduct by Mr. Kodatt, it was suggested that he resign as state representative for the 22nd District. We are committed to a zero-tolerance policy in the workplace,” they said in the statement.

After Kodatt submitted his resignation Wednesday, Feb. 24, Madigan said in a statement that he would support Guerrero-Cuellar, who works for local nonprofit community service organizations including Envision Community Services and The Hispanic Star Chicago. Previously, she volunteered for the YMCA on the city’s Southside.

Guerrero-Cuellar said she and her husband, who was undocumented and is now a police officer, have three daughters. She said in her presentation to the committeepersons on Feb. 21 that she has been involved in community service “since day one.”

“Being a representative of this community is knowing my community, listening, being out there,” she said on Sunday during her presentation. “I think I am a great candidate to represent this 22nd District. I’ve lived here for 30 years I’m still in the community. If I don’t receive this position, I’m still going to be active.”