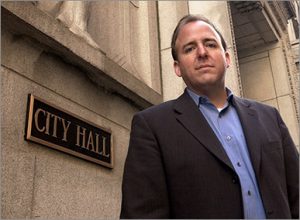 Second in a series of articles looking at the horse-carriage industry in Chicago.

Horse-drawn carriage rides in Chicago could be extinct by this winter, if a growing number of aldermen get their way.

Aldermen Brendan Reilly (42nd Ward), Brian Hopkins (2nd) and Raymond Lopez (15th) have proposed legislation that would prohibit the three carriage companies in Chicago from being able to renew their licenses in November.

“There are numerous documented incidents involving horse-drawn carriages operating in congested urban environments,” the aldermen wrote in the legislation.

“We draw tourists. We have 53 million people come to Chicago,” Reilly told the Chronicle. “None of them comes for carriage-horse rides. The city has a lot to offer without endangering public safety.”

Reilly, whose 42nd Ward includes part of the Downtown area where the horses circle, said he is very concerned about the transportation issues with the horses operating in close proximity to cars and buses.  He said the horse-drawn vehicles operating on busy downtown streets are recipes for disaster.

Reilly said the amount of traffic in the city’s central business district does not make it conducive for carriages to be operating.

The alderman said he also has concerns for the horses, which have been overworked and put in danger for the sake of profits.

Jodie Wiederkehr, campaign director for the Chicago Alliance for Animals, said her group has continually seen the city’s three carriage companies violating the city regulations regarding the carriages. She said the horses are continually worked past the six-hour time limit in city statues and can regularly been seen out on Chicago streets when it is above 90 degrees – another violation of city rules. She said water, oftentimes, is not available for the horses to drink when waiting for customers – another violation of city regulations.

The legislation to ban the carriages from the city is pending before the City Council’s License and Consumer Protection Committee, chaired by Ald. Emma Mitts (37th Ward).

“I hope we can have a hearing on the issue in September where both sides can give information and presentations,” Reilly said.

Wiederkehr said that 25 of the city’s 50 aldermen have given her their support for the horse-carriage ban so if they hold ranks only one more aldermen would need to give the measure his or her support to get the ban passed on the City Council floor.

Reilly said the loss of city revenue from the carriage companies, should the ban be passed, would not be significant. On the other hand, he said, a drop in tourism because of a tragedy involving a carriage passenger or driver, or one of the horses could definitely hurt the city.

RELATED: Watchdogs look out for carriage horses in Chicago