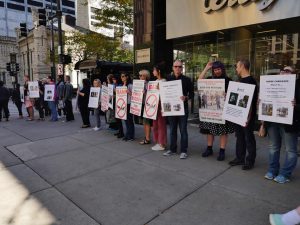 Chicago Alliance for Animals members try to inform people about the detriments of horse-drawn carriages. (Photo courtesy of Jodie Wiederkehr)

First in a series of articles looking at the horse-carriage industry in Chicago.

The two words tattooed onto Jodie Wiederkehr’s left forearm speak volumes about her passion and focus.

The words “Animal Liberation” are written in cursive on the left arm of the campaign director for the Chicago Alliance for Animals.

Wiederkehr would like nothing better than to see horses permanently freed from the carriages harnessed to them in Chicago’s Downtown area. She said there is nothing romantic about horse being overworked and mistreated.

“Horse carriages is always something that has bothered me and kind of haunted me, especially here, but also visiting New York City, Montreal and so forth,” Wiederkehr said. “So I started to focus on that when a group of friends of mine and I started the Chicago Alliance for Animals.”

While the alliance has been in existence since 2015, Wiederkehr has been working for the welfare of animals for almost 20 years. She started the Center for Ethical Science to aid animal used in biomedical research and cosmetic testing, and exposing violations of the Animal Welfare Act.

Operating without any staff or funds, Wiederkehr continues to work on behalf of animals with the Chicago Alliance for Animals.

Chicago Ald. Brendan Reilly (42nd Ward) has proposed an ordinance that would ban horse-drawn carriages from the city. The proposed legislation could get a hearing before the City Council’s Licensing Committee as soon as September.

Wiederkehr and the Chicago Alliance have thrown their support behind the measure.

“It’s very short and sweet,” Wiederkehr said of the legislation. “It says that the licenses will not be renewed in November when there up for renewal. As far as I can tell, that means a full ban. If they don’t have a license they can’t be on the street.”

Wiederkehr said that her group has been monitoring the city’s three carriage companies since early 2017. She said horses have been worked 12-plus hours when Chicago’s law says they can only be worked six hours in a 24-hour period.

The Chicago Alliance for Animals representative said group members have been down at carriage stands at 11 a.m. or noon and seen the same horses on the street working at 11 or midnight that same day.

Jodie Wiederkehr, campaign director for the Chicago Alliance for Animals, holds a sign remembering a horse that died from a carriage incident. Wiederkehr hopes to get horse-drawn carriage rides banned in Chicago. (Photo courtesy of Jodie Wiederkehr)

Wiederkehr said in winter months when there is no fresh water source, horses are supposed to have buckets to drink from, but has seen on numerous occasions no water out for the horses.

She said alliance members have reported alleged violations, such as no drinking water, to Chicago police.

“Even when there is water, we rarely see the horses stop and drink or be allowed to drink,” Wiederkehr said, “because the bucket is usually at the start of the line but the horses are usually a good six to 10 feet from that bucket. So if the first horse in the line gets a rider, a lot of times they will do a U-turn right there, which is also illegal, and they don’t allow the horse to stop and drink. So it doesn’t really matter that that bucket is there.”

Wiederkehr said she and others have gone down to the carriage line and not seen one horse drink water over a nine-hour period.

She said Chicago regulations also require that horses be pulled from the streets when the temperature reaches 90 degrees or above at Northerly Island. She said that frequently is not the case.

Wiederkehr noted that ironically the city department that regulates the carriages, Business Affairs and Consumer Protection, doesn’t work weekends, the primary time carriage are out of city streets. She said the agency is primarily complaint driven.

“It means they only take action when they get complaints,” she said.

Wiederkehr said that it doesn’t make sense for private citizens having to be the ones monitoring the carriage companies for alleged violations.

“This is not and should not be the job of concerned citizens,” Wiederkehr said in an email to Ald. Leslie Hairston (5th Ward). “Yet, at this time, myself and others continue to spend our precious time on hot days going to the carriage stand because we know no one else will.”

—- Watchdogs look out for carriage horses in Chicago —