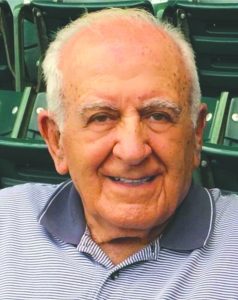 The late Gerald Friedman served Northbrook as its village president from 1973-81, and as trustee for 10 years before that.

In 1998, a former village president of Northbrook insisted that an answer he gave to a question be kept off the record, and I have done so, until now.

Gerald Friedman, 94, was buried Sept. 10, and there’s really no one to protect anymore.

The answer was “Yes.”

After a short explanation, I’ll tell you the question.

Friedman and I were speaking, 17 years after he completed his second and final term, because I was writing a newspaper section on the nearly complete lack of affordable housing in his town. It was an old, and not unique, suburban story, and one that continues today.

I had learned that in 1975, the Northbrook Human Relations Commission had published a study of the worsening affordability. The report recommended several fixes, including federally subsidized housing, allowing smaller lots for cheaper homes, requiring developers to include affordable housing in larger projects, and building low-cost senior housing.

In 1985, the village opened its affordable Crestwood Place senior housing building, but none of the report’s other recommendations were enacted.

The report’s principal authors, Tom Phillips and Sam Roberman, were no longer alive, so I asked the village president who served in 1975 what happened.

“When you talk about low-income housing, everybody has a vision of a ghetto,” Friedman said.

“They visualize crime, drugs, and what not. It’s a fear that dwells in people’s minds, a lot more than it should.”

Friedman said he and some other progressives considered Crestwood a compromise. “Most of us thought it was better than nothing. But it was not what some of us wanted.”

Here’s the “Yes” question: “Would allowing family affordable housing be seen as the biggest betrayal imaginable of the local electorate, because people thought it threatened their property values?”

It would, he said. No matter what he personally considered best for the community, the majority of the village board was certain that most voters wanted their property value protected, to the exclusion of all other considerations.

He personally doubted most people believed affordable housing would change anything much, but he knew some people thought so, and they trusted the village board not to take the risk.

That appeared to be the way Northbrook leaders — and those of many other Chicago suburbs — seemed to continue to view affordable housing, decade after decade.

Property values remained solid, but divorced women and their children often had to move if they didn’t get the house. Kids who grew up in Northbrook couldn’t buy their own homes there. Black and brown residents are exceedingly rare.

There was often talk on the Northbrook Village Board about requiring some affordable family housing in big developments, but the developments were always approved without any. Often, the reason was that no rules had been written to define a requirement.

That happened again this year with a 315-unit apartment complex for Northbrook Court. After that opportunity went away, the Northbrook Village Board pledged to create an affordable housing ordinance.

There’s talk around Northbrook that the village board is serious this time, because a bunch of progressives attained the dais in the last election. It’s part of a pattern that’s prevalent all over the country: Affordable housing ordinances are catching on in places that shunned them previously.

The Northbrook board is talking about writing an ordinance like the one neighboring Highland Park has had for years. That code requires many developments to include 20 percent affordable units. Affordability, in Highland Park, is defined as 30 percent of income of families earning 120 percent of the Chicago area’s median.

If the developer won’t do it, a payment has to be made to a community land trust, which is used to buy land for affordable housing.

The Illinois Housing Development Act requires 60 percent of the median, and $950 a month. But Northbrook’s village lawyers have maintained since 2004 that it’s free from the law because of its home-rule status, and other towns have followed suit.

Northbrook village leaders have for years shied away from the term “affordable” in referring to housing, preferring “attainable,” as in attainable for local professionals like cops and teachers. They maintain Northbrook land is just too expensive for any real affordability.

Northbrook businesses for decades have been hard-pressed to fill jobs in retail stores and restaurants. This kind of new requirement won’t help, unless there’s sudden good fortune brought to the finances of busboys. Or, of course, if a half-dozen of them decide to live in the same apartment.

Over the years, as Northbrook’s housing stayed exclusive, the town has become less and less diverse. And older. As of a couple of years ago, Northbrook’s median age was 48, six years older than the state as a whole.

That’s what happens when, instead of building affordable family housing, a village keeps approving “luxury units” and “empty nester” homes that mostly only older families can afford, and senior housing, also usually expensive. It’s better, at least, than neighboring Glencoe, which also has barely any affordable housing, but almost no senior housing, either.

Friedman lived for almost a century, and never saw anything like that happen in Northbrook.