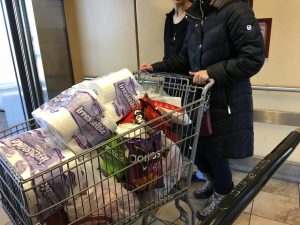 It’s hard to store large amounts of toilet paper, but it’s easier than not having any at all. (Photo by Irv Leavitt)

If you try, you can fool your kids into thinking you’re a big spender while spending almost no money at all.

For years, I took my daughter to used clothing stores, where I would tell her heroically, “Pick out whatever you want!”

Unlike the retail stores, with their unimaginative racks full of identical garments, every resale store hanger holds an outfit wildly different from the next one. It’s like shopping on acid, without the paranoia.

It was at one of these stores that I picked up an Army green T-shirt with some foreign words across the chest: “Gam zeh ya’ avor.” I had no idea what they meant, but for $2, I took a chance it wasn’t something obscene.

I looked the words up later. They mean “This, too, shall pass” in Hebrew.

The phrase, probably Persian, is about a thousand years old and widely known. But the popular modern meaning — that bad things won’t last forever — is only half the story. The other half is that good stuff doesn’t last forever, either.

Abraham Lincoln, at the end of an 1859 speech to the Wisconsin State Agricultural Society, explained it beautifully, as he explained everything. He used a fable associated with the phrase to tell farmers competing over who had the best cows and ducks what the results might mean for both winners and losers.

“It is said an Eastern monarch once charged his wise men to invent him a sentence, to be ever in view, and which should be true and appropriate in all times and situations. They presented him the words: ‘And this, too, shall pass away.’ How much it expresses! How chastening in the hour of pride! — how consoling in the depths of affliction!” Lincoln told the Milwaukee audience.

“‘And this, too, shall pass away.’ And yet let us hope it is not quite true. Let us hope, rather, that by the best cultivation of the physical world, beneath and around us; and the intellectual and moral world within us, we shall secure an individual, social, and political prosperity and happiness, whose course shall be onward and upward, and which, while the earth endures, shall not pass away.”

You may have noticed that Wisconsin, and the nation at large, has yet to enjoy such moral and intellectual prosperity and happiness. First, the Civil War got in the way, and there were a lot of other challenges since then. The latest impediment to achieving Lincoln’s vision could be the plague now hanging out at the doorstep of every home in the world.

It’s an unusual pestilence that bides its time unseen on almost any surface, or hangs in the air for hours, like the aroma that clings to a car’s interior after a gyros is eaten in the front seat.

As I write this, lights are winking off all over the nation and the world. Businesses are closed or going to bare-bones. We’re all learning to live without dining out, live music, baseball and most other things that make life worth living.

This, too, shall pass away. We will return to normalcy (or the odd, dog-volunteers-to-get-eaten-by-the-bigger-dog system that passes for American normalcy). But not everybody is coming back to that paradise.

Some of us will lose the COVID-19 lottery. Others will just get instant COPD.

Some businesses will never return. Legal notices of their bankruptcies will be printed in these pages. We have a nice deal on that.

Their owners and employees will have to start over.

But could some of that be avoided if every time we thought about buying something from a store we can’t visit, or don’t want to visit, we found ways to buy it anyway? One way, of course, is purchasing for pickup or delivery.

An even better way is that great American institution, The Gift Certificate.

If you’re cooking up frozen fish sticks tonight while pining for that sushi roll you really want, that could inspire you to use the money you’re not spending on expensive raw fish to buy a gift certificate from the sushi joint’s website. The restaurant could use your money like a loan while its dining room is closed, which is when it really needs the cash.

When it’s once more safe to mingle, you can opt for an evening out that will remind you that you helped one of your favorite restaurants survive — by spending absolutely nothing extra. It’s an even better deal than buying clothes at the resale store.

And you know what? Barely any of you will do it.

The 21st Century American motto seems to be, “I don’t give nothin’ to nobody. Unless I can write it off my taxes.”

And almost everybody who actually thinks the gift certificate scheme is a good idea will wuss out before they type their credit card number into a website.

“Hey. What happens if they really do go out of business? I’ll be out 60 bucks.

“So I’ll just make sure we go there again after it’s all over.”

This, of course, is known as “People Unclear On the Concept.” Patronizing a business after the all-clear whistle has been blown is OK, if we have confidence it’ll actually still be there.

It might not be, but if it isn’t, that’s not our problem.

Most Americans prepare for the future like Little Orphan Annie, confident that the sun will come out tomorrow, without our help.

They make fun of the toilet paper hoarders, though they may really have a bit of a point. And they’re doing supermarkets, and the economy at large, a favor. They’re paying real money for low-quality TP that would otherwise be rotting away on the hardest-to-reach shelves of dollar stores.

I don’t belittle the toilet-paper craze. I talked to several of those buying three or four big packages, and they all told me the same thing: if my family is stuck in the house for who-knows-how-long, one thing I definitely don’t want to run out of is toilet paper.

In many parts of the world, toilet paper is a luxury. Abundant TP is one of the things that makes America great.

Unfortunately, most Americans are not good at recognizing what makes their country great.

We have the ability to solve most issues before they get big, but we keep finding new ways to foul up our preparedness that some lesser nations would never consider. Does anybody think it’s a point of pride that South Korea killed its COVID-19 response before the U.S. even admitted there was a problem?

Americans love to say, “Don’t fix it if it ain’t broke.” The lesson of COVID-19 is that it should be no fun to say that anymore, because we rarely fix anything important until it’s too late, or way harder to do than it should be. This time, waiting too long has serious consequences.

Lincoln’s idea in 1859 was that at the same time we learned to farm better, we would learn to be better people. But that never happened, because we’re always too busy playing catch-up.

Every time we make a little progress in living with our brothers and sisters, we look for ways to save money.

So we never get to be much better people. But some of us do get richer.

This, too, shall pass away.