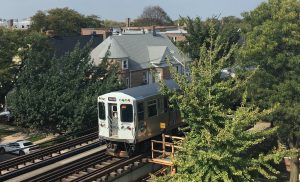 CTA rapid transit trains are shiny, clean and attractive, but the experience of riding in them isn’t always pretty. (Photo by Irv Leavitt)

At 10:30 p.m., I sat down in a car on Chicago’s Red Line, and a gent I had just seen blow his nose onto the Fullerton platform sat down next to me.

He pulled out a wireless phone, and loud, bad salsa music came pouring out of it.

I was tired, and cranky because I had to be on the train instead of doing something fun, like watching the Super Tuesday returns come in on TV. Yes, my fun is probably not your fun.

“Please, my brother, I don’t want to hear your music tonight,” I told the guy flatly.

He turned up the volume, but I didn’t flinch. Not my first rapid transit rodeo. He did that just to show he wasn’t intimidated. He turned off the music 30 seconds later.

Everybody on the car seemed to have a pleasant ride for the next three miles. If the fellow had been blasting his lousy music, I doubt as many people would have been smiling. I couldn’t help thinking that so often, especially at night, CTA rapid transit rides can be unpleasant. People use the trains as sleeping cars, or yell or beg or, occasionally, pummel, rob and rape, too.

Wouldn’t it be nice if there was someone riding on CTA trains whose job was to make sure that paying customers had a good chance of having a safe and pleasant trip? There used to be.

Earlier that day, I had called John Greenfield, who has specialized in writing about transportation in Chicago for years, and done it well. I called him because he had written on the Streetsblog Chicago page in mid-January that it would make sense to consider bringing back conductors, who were dropped from the CTA payroll in 1998. It’s a rare opinion nowadays, but we share it.

The conductors were mostly unarmed uniformed CTA personnel who kept the peace for many decades, mainly just through their presence and a little jawboning. They usually wouldn’t call the cops unless things really got out of hand.

“It’s not clear how realistic a proposal it is,” Greenfield said a little sadly, adding that since conductors were dropped when the cost was only $13.8 million annually, they ain’t coming back now, when they would come more dear, and money’s tighter yet.

He said he’d be happy if the CTA would just add conductors on some of the lines, 10 p.m. to 6 a.m., but he doesn’t see even that getting consideration.

The city, however, faced with a rapid transit crime wave, has assigned much more expensive Chicago Police officers to the trains, at least temporarily. And as soon as that started, a couple of cops got into it with a fellow who had apparently committed the dastardly crime of crossing between trains. By the time that was over, he’d been shot a couple of times.

At this writing, Chicago police are highly visible nighttime presences on the rapid transit system. The Loop stations look like FOP meetings.

It seems to me that the city isn’t interested in providing an enticing public transportation product. The goal, I think, is merely to make it survivable.

Greenfield notes that crime started to go up on the often-problematic Red and Green lines as ride-share came into the picture in 2015.

Maybe, as some people who have opted for somewhat more expensive personal transportation have left the nighttime system, the poor souls who remain on the El are easier marks.

More people might ride if the trains were safer and less stressful. After all, the very safe O’Hare leg of the Blue Line keeps getting more and more popular, at all hours.

Meanwhile, the CTA has started to spend $2.1 billion to add track on North Side lines to increase capacity and speed.

That’s a lot of money to spend on a system that significant numbers of people dislike.

Many of the people making the CTA unpleasant for other riders are just garden-variety jerks, like my friend from the other night. Others are  homeless or mentally challenged or both, and, for them, a rapid transit car can be a reasonably safe and comparatively comfortable place to be. That’s more our fault than theirs, because they need us to help them get by, and we’re not there for them. One of the reasons they bother us is we feel guilty about it.

We spend billions on public capital projects, while underfunding the needs of people. So there are no conductors on the trains, but plenty of homeless people.

In the last generation, we have developed a very odd way of providing government services. We try to save money by cutting everything that makes the services worth providing. The thinking seems to be that if we provide more access — as in Chicago’s current rapid transit improvement project — we’ll have more paid usage, and then the job is done.

But we mostly expand transportation in the places where it already exists, instead of adding it where people really need it, so they can get to jobs without setting their alarms long before the crack of dawn.

Our governments give tax breaks so expensive office and residential towers can be built without adequately fostering the educational and social systems that should serve that increase in commerce and population. At the same time, tax breaks rarely promote housing for people who genuinely have a hard time finding it. We’d need less public transportation if people could actually live where the jobs are.

But we, as a people, fight our natural predilection to help each other, in the big things like better public transportation and affordable housing, and the small things, like publicly accessible washrooms and places for disabled, elderly or just plain tired people to sit down and rest without being given the bum’s rush.

I actually heard a politician quote the New Testament’s Book of Matthew recently to justify ignoring the needs of our fellow humans. It’s been a while since most people had the stones to make the point he made last month.

Jesus, defending a woman who had anointed his head with expensive oil instead of selling the oil for the benefit of the poor, famously said, “You will always have the poor among you, but you will not always have me.”

The guy used this passage to support the premise that taxpayers are important and the destitute aren’t worth the trouble. In the long run, that doesn’t even work economically, let alone morally.

I find it unfortunate that the story of Jesus, arguably world theology’s most widely known champion of the poor, is still saddled with this parable as if selfishness is Christianity’s core teaching.

Even if it’s accurate, I would think we could have gotten a little farther in the last 2,000 years.