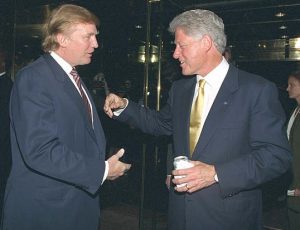 The justification for Bill Clinton’s impeachment wasn’t nearly as strong as that of Donald Trump.

But it was stronger than a lot of us thought it was at the time.

That may seem like overly late second-guessing. And it is.

I think some people smarter than me — who are legion — came to this conclusion a long time ago. But before my opinions of Clinton’s impeachment evolved, Trump was already President, on his way to doing so many bad things.

It was sex outside his marriage, but that’s only something for evangelical Christians to worry about at election time.  It’s not a reason to chase the President of the United States out of the Oval Office.

I had more than a decade of cab-driving and hotel work in the rear-view mirror then. That employment, by nature, meant I provided transportation and accommodation to people of all stripes, genders and proclivities intent on letting their sexual urges and obsessions get the better of them. But as long as everybody was a willing participant, no harm, no foul — or at least none of my business.

I had sort of forgotten that I had once been abruptly promoted to head housekeeper of The Hotel Belmont in Chicago after the previous holder of that position had been fired for sexually harassing some of the maids he supervised.

After a couple of months cooling his heels, he promised to be a good boy, and he was rehired. I went back to hanging curtains, operating elevators, carrying bags and holding doors open.

I also had nine years experience covering crime for newspapers by 1998, when Clinton was impeached. That should have informed me better.

I had written about waitresses who were pressured by restaurant managers, and even busboys. A couple of nursing home employees complained to the Equal Employment Opportunity Commission about the owner. There was a builder who wouldn’t leave one of his salespeople alone.

In 2002, I learned for the first time about an Illinois law that made an exception to the state’s legal “age of consent,” which indicates that at 17, an individual is old enough to make the decision about whether to have sex.

But this particular law extends the age through the 17th year if the sexual partner is somebody like an athletic coach or teacher. Basically, it recognizes that even high school seniors have a hard time saying “No” to anyone in a position of power over them.

Lewinsky, a 22-year-old intern when she met Clinton, was substantially older than a 12th-grader. But the person propositioning her was the most powerful person in the world.

Lewinsky, at the time, said she did not feel she was coerced. But it almost doesn’t matter. It also matters little that Clinton was probably his charming self throughout.

Presidential impeachment, after all, is about abuse of power. And just by putting Lewinsky in that position, he was abusing his power. Spectacularly, actually. It was like killing a mouse with an atomic bomb.

The Lewinsky case originally emerged as corroborating evidence for Paula Jones’ sexual harassment lawsuit of Clinton. Jones claimed that in 1991, two Arkansas troopers escorted her to Clinton’s hotel room, where he propositioned her and exposed himself. He was Arkansas governor and she was a state employee.

It’s not clear that her claims are true, especially since her lawsuit was dismissed. But during her appeal, Clinton gave her $850,000 to go away.

Details aside, the fact of the settlement indicates that Clinton’s behavior with Jones was, like the Lewinsky affair, a gross mismatch of employer and employee power.

In time, I had developed doubts about Clinton’s behavior as a chief executive. I had stored them, however, along a back road in a part of my brain marked by Dead End signs.

That all changed with the Me Too movement. Like a lot of people, I stopped to think about the circumstances of my own life and those of others.

I realized then that I had given a pass to Clinton because he was the President. And because his pitiful attempts at getting a little sex seemed so unimportant.

But it isn’t necessarily unimportant to the people involved.

I remember a quiet business lunch with a female newsmaker at about the same time as Clinton’s impeachment. She slowly and dramatically removed her wedding band and placed it on the table between us.

I looked at the ring, and I looked at her — not unkindly — and then closed my eyes for a few seconds. When I opened them, her ring was back on, and she was calling for the check.

My silent response was intended to be the kind that she could absorb while pretending that nothing had happened. So you might expect that we both would treat it as a small, unimportant moment.

I didn’t try to call her for comments or interviews for six months. She didn’t return a call for another five years.