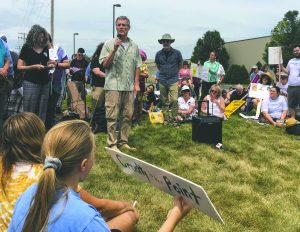 Brother Michael Gosch speaks about immigration issues at a vigil outside the Kankakee County Jail. (Photo by Irv Leavitt)

After attending a recent protest vigil outside a rural Illinois jail housing asylum seekers and other aliens awaiting adjudication, a question occurred to me.

What did these people ever do to us?

More and more, we’re treating them like criminals, guilty of wanting to come here and hang out with us.

They must be terrible people.

So I sat down to remember, in my long road of life, whether someone like this had ever done anything bad to me, in particular. I thought of all the things that have happened, and who did them.

A couple of crackheads beat me with sticks on Farwell Avenue once. But they were born here.

I was burglarized a few times, but the only time I ever knew who did it, it was an American ex-roommate.

I was on a train wreck that killed two people and injured hundreds more, including me. Everybody involved was an American.

I got laid off from a job after 28 faithful years. The decision was not made by illegal aliens.

I thought of the doctors who misdiagnosed my relatives, resulting in their suffering and premature deaths. I remembered the many politicians who betrayed my trust. I remember the kid who shot at me when I was little, and the boy who stabbed me. The kids who rolled me on the way home from the tavern. All raised under the red, white and blue.

The gent who evicted me even though I had never missed a month. The guy who hit my kid with a car and took off.

All citizens, I’m afraid. So were all the con men and women I’ve tried to avoid. All the bookies and gyp joint operators, boosters and porch climbers, gun runners and drug dealers, too.

But finally, I thought of one who might not be. A friend of mine was driving my car when it was hit and totaled by somebody without insurance. The young driver showed an ID with a Spanish-sounding name and a home address of 5950 N. California Ave. in Chicago, and a cop let him go.

Of course, he was never seen again. That’s the address of Mather High School.

Now, I just assumed that the kid was illegal, because of the ID. But he might have been a citizen. We’ll never know, because of a police officer who didn’t care enough to check anything at all.

A police officer from America.

Another American cop, Kankakee County Sheriff Mike Downey, didn’t care enough to call me back to tell me why he thinks it’s been a good idea to keep an average of about 175 people — people either trying to get into the United States or trying to stay here — in his jail for the last couple of years.

“It’s because the federal government pays $1 million a month,” said Daniel Aumiller, an activist with Connect Kankakee, an organization assembled just to protest the practice. “This is not the way (for Kankakee County) to raise money. This is not economic development.”

Downey has also tried to expand the jail just so he can be of more service to ICE.

Aumiller was the first person I met when I got to the Kankakee jail to watch the Aug. 11 vigil, which had been organized by Chicago-area Jewish groups.

I had ridden there in an SUV driven by Rabbi Bruce Elder of Congregation Hakafa, on Chicago’s North Shore, with congregation president Nancy Goodman, her husband Lee, and members Steve Greenberg and Allison Davis. Eight more members arrived in other cars, part of a gathering of over 200 Jews and non-Jews who camped for a while between the jail building and a soybean field.

Some of the members, led by the rabbi and Lee Goodman, had traveled several times to Texas and Florida, to make their presence felt outside the more notorious camps for asylum-seekers there, including those for children. Lately, they’ve been turning their attention to their home state, where at least four jails are said to be incarcerating adults in exchange for stipends from the feds.

Many of the adults’ cases, I heard from the assemblage in Kankakee, are decided while they are not present, but watching on video. Some never get any hearing. In general, they’re not entitled to representation.

An odd form of justice is practiced in immigration courts, where it sometimes feels as if the accused are guilty until proven otherwise.

The guarantees of due process and equal justice are granted to “people” by the U.S. Constitution, not just citizens. But nowadays, not all people are treated the same.

During the vigil, Brother Michael Gosch, of the Viator House of Hospitality, a Roman Catholic home for young immigrant men seeking asylum, told the story of a young man fleeing Al Shabaab terrorists who arrived in the United States alone and friendless.

“Abe came from East Africa,” he said. “He left home at 16. And when he arrived here, he went into a youth shelter, and because he did not have a birth certificate that could be authenticated, ICE came and age-redetermined him by scanning his jaw.

“And because the result indicated that perhaps he could be 18, at age 16 he was sent to adult detention, where he was for two years and seven months.” At that point, finally, an interested couple found him a lawyer, who helped him get out of the Kenosha County Jail.

Gosch told several other stories. One gay youth from Central America said he left home “because they kill people like me.” Another was raped by a politically powerful man, who promised death to his family because he had dared to press charges.