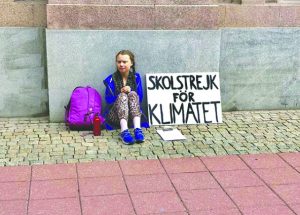 We all know Greta Thunberg has called us to action, but we haven’t acted much.

President Trump’s hijinks stole the news cycle from The End of the World.

Before we found out that Trump had apparently been a very bad boy on the phone to Ukraine, everybody was paying attention to Greta Thunberg, the serious kid from Sweden who whipped the endangered species known as Our Children into fighting back.

Worldwide, kids were joining her School Strike for Climate days before delivery to the United Nations of the latest report of its Intergovernmental Panel on Climate Change. But compared to the other stuff we’re following, it was opened in privacy.

This IPCC report, from scientists from 86 nations, concerned the effect of climate change on oceans, and the news is very much not good.

Do we ever worry much about global warming? If we did, Greta Thunberg would leave us alone, and go to parties and play miniature golf.

I think more people would worry, and get moving, if they accepted the premise that we, as a species, have caused global warming, and it’s getting worse. But the only answer most experts give the doubters is something like, “Ninety-seven percent of climate scientists say so!”

There’s an answer in the IPCC report, but it’s not really suitable for human consumption. Here’s a translation: The scientists figured out the range of climate change that natural causes could be responsible for, and what’s been happening since 1951 is way, way worse than that. They also mapped out the range of what man-made causes could have done, and what has actually happened is smack in the middle of that range.

But Kentucky Gov. Matt Bevin said that blaming people for global warming is ludicrous. Asked about Thunberg’s insistence that leaders like him get to work to reduce fossil-fuel burning, he told attendees of a Southern States Energy Board meeting — including coal industry executives and two other coal-country governors — that Thunberg is “remarkably ill-informed.”

In his comments the day after Thunberg’s Sept. 24 speech to the UN, he said that heeding her would “eliminate some of the industries that are in this room,” according to Lucas Aulbach of the Louisville Courier Journal.

If less coal was mined, fewer people would be employed as miners, and that’s bad. Many of us know what it’s like to be laid off, but we would accept it better if we were convinced that one of the fruits of our employment was worldwide mayhem and death. Kentucky needs leaders who tell the truth.

One of the IPCC report’s specific warnings is that after the oceans rose half a foot during the last century, they’re now going up a little over an inch every three years.

Unfortunately, they say it’s going to be much faster and deeper than that, even if we slow down the emissions moderately. The rate seems to be going up as time goes on. One reason: Every time a hunk of polar ice shelf melts, it exposes more of the lower portion of the next stretch of ice shelf to the warmer water. So that one melts faster.

Also, there’s hot, hotter and hottest when it comes to air temperature (which melts ice, as most people who like a nice cold drink are aware). Right now, we’re somewhere in the “hotter” area, on the way to “hottest.” Last July was the warmest month ever, since they started keeping track with thermometers in 1880.

And records are made to be broken.

If you’re unnerved by the increasing frequency and potency of cyclones, hurricanes and other anti-social weather phenomena, get used to it. There will be more, and they’ll be uglier.

Most of global warming’s heat goes into the water, and that is making the seas more acidic and less oxygenated. I hope the kids don’t like seafood.

You may be seeing a lot less cod in your local grocery very soon, because of changes in fishing regulations, handed down Sept. 25, in the wake of a population drop.

Despite fishery conservation measures, North Sea cod stocks fell 47 percent from 2017 to 2018, according to SeafoodSource. Warmer water is blamed. It’s unsure whether the fish died or moved on.

The United States, an ocean away, is as much to blame as any nation. Only China, where gas masks are a fashion statement, produces more greenhouse gases than we do.

But you’re not hearing much about politicians calling for emission reductions to save fishing jobs, which are threatened everywhere. That’s because the industry doesn’t have the kind of lobbying clout the energy companies have.

Politicians have been trained to jump as soon as an oil man tells them to. Seemingly out of nowhere, Trump recently signed an executive order to stop California’s long-held practice of requiring tougher auto emissions standards, which have been traditional drivers for national regulations. The car companies didn’t even want the help, but they got it.

Energy money is also the reason that Thunberg has been accused of being mentally retarded and mentally ill, and astoundingly, compared in both appearance and strategy to Nazis. After all, there was a lot at stake for the fossil fuel industry when she told the UN, “People are suffering. People are dying. Entire ecosystems are collapsing. We are in the beginning of a mass extinction, and all you can talk about is money and fairy tales of eternal economic growth. How dare you.”

In July, the BBC reported that some scientists and leaders in the UK maintained that if the political activity necessary to scale back fossil fuel use isn’t done by the end of next year, that’ll be it. We won’t be able to save enough of the world to make the world worth living in.

They may be wrong, but they’re probably not wrong by much.

So if the only thing you’ve done about your kids’ environment is hold their hands on the sidewalk outside their school on School Strike for Climate day, you’re not appreciating the immediacy of the matter.

The strike wasn’t for you. It was for the kids to tell the adults to get moving.