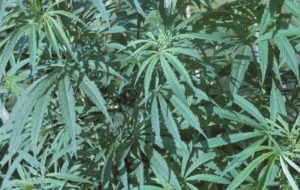 Marijuana is now legal in Illinois — up to a point. (National Museum of Natural History photo)

There are lots of exceptions, and those exceptions are likely to be flexible.

The system is not fun, at least not for you. Keep that in mind before doing anything that used to be illegal, but now is not (much to the chagrin, in this case, of the Illinois Association of Chiefs of Police, and some others charged with upholding the laws of the Land of Lincoln). Many of those in leadership of the law enforcement community think marijuana smoking is bad for society, especially their corner of it. Their future activities may reflect that conviction.

I learned about the system several times, including once, back in the previous century, when I pulled my car off Chicago’s Clark Street to turn around so I could drive the other way, and locate the hot dog stand I had somehow missed.

GPS still being far in the future, I stopped to look at a house number so I would know not to go too far, and not return to Clark Street, having missed the address again.

That stop occurred within a block or so of Sullivan High School, a fact of no actual importance. But the local constabulary had been put on notice by parents and deans that Sullivan students seemed lately to be ingesting more illicit drugs than they were comfortable with. The police were charged with being on the lookout for ruffians like myself and my passenger, who thought, apparently incorrectly, that we were just looking for a good grilled Polish.

But the watchful cops decided they had found the spear-point of some major drug cartel, slowing down to look for innocent children to sell intoxicating substances to. They curbed my ancient Chevy, ordered us out, and swarmed over it.

They found my little garbage can that sat upon the car’s transmission hump, and rejoiced upon slitting open the tiny sandbags that weighted it down on either side. They filled multiple evidence bags with the white powdery contents.

I probably should not have found this so outwardly amusing. They angrily redoubled their efforts, and found a bag tucked into the springs under my seat containing an ounce of “a green leafy substance,” and they finally had something marginally worthwhile to place into evidence.

I was not overly concerned, because you could have up to 30 grams and still be charged with no more than a misdemeanor. An ounce is about 28.5 grams.

But after spending several hours chained to the stationhouse wall, we found ourselves charged with felonies.

This was unlikely to have been based on fact, because the fellow I had bought the bag from was typically very careful not to include a bonus. Someone in the 24th District station may have had his thumb on the scale.

This is the kind of thing that can happen in a criminal justice system rewarded more for numbers of criminals caught than justice.

You may be chagrined to know that even after legalization, it’s still a crime to have more than 30 grams of pot. It’s now an Illinois misdemeanor, however. If you do it twice, it’s a felony again.

There are many other ways that smoking marijuana is still illegal. If you do it almost anywhere in public, you’re out of luck. You may think it reasonable to allow dope-smoking in your corner tavern, so two kinds of wasted people would be corralled in the same place, but that’s not happening. Cuts down on the beer sales, I guess.

Those of you who have been passing a joint just outside a tavern door during marijuana prohibition will find that’s still illegal. I am guessing, also, that now, more nosy neighbors are going to be watching, and even more prone to sic the cops on you.

Similarly, don’t imagine for a second that your boss is going to change the company attitude about getting high at work. You’ll still be fired. It’s even spelled out in the new law, to make sure no one misunderstands.

Legal weed is only for the over-21 set. Don’t even think about marijuana in any place that has anything to do with kids. Not unless you want to see a day care center, foster home or private school lose a license. If you’re a teacher who likes weed, it’s better to just pretend that nothing has changed.

If you have marijuana in the car, that’s still illegal, unless it’s “in a reasonably secured, sealed container and reasonably inaccessible while the vehicle is moving.” What that means, exactly, depends on who you ask. It looks like it’s good if it’s in the trunk, or in the unopened package you bought it in. And, by the way, if it’s not in one of those nice state-approved packages, it’s not cool anywhere. Your friendly neighborhood dealer has not been cut in on the legal weed business.

Keep in mind that we don’t have a drunk driving law. We have a law against driving under the influence — of any substance that conceivably could impair you. And most police departments are going to be ready for you dope smokers, despite the fact that unlike for alcohol, there’s no cheap field test to check to see if you have marijuana in your system.

So just like before, if your eyes are bloodshot and there’s a joint in the ash tray, it sucks to be you.

And now, don’t be shocked if you get a free ride to a hospital for a blood test, just to make sure an impaired-driving bust sticks. There are lots of people in this state who want to build up numbers showing that recreational marijuana is a bad idea.

Marijuana crimes have been a major raison d’être for Illinois police departments and court systems, which often get to spend the biggest chunks of city and county taxes. There’s a lot at stake.

And, to some extent, the cops are right: Medical marijuana is a revelation, but recreational marijuana, not so much. Significant numbers of experts on brain development say too much pot-smoking before the age of 25 tends to make you stupider. Some disagree, but everybody is on board with the opinion that marijuana makes you stupid for a considerable period after smoking it.

So if you just sparked up a doobie, go back and read this later.