I have been very careful not to fall into the Joe Biden trap since long before he got trapped in it.

It’s not necessarily a fun way to live, but I’m used to it.

One night when I was 20 years old, and significantly chemically impaired, I enthusiastically pinched a woman’s butt. I still feel guilty about it. But I think that represented the beginning and ending of my entire career of invading women’s space.

Unbidden, I rarely touch a woman with more than three fingers, and only on her arm. I’ve been that way for decades.

I think that made a lot of people see me as a big weenie. But now I’m in style.

Joe Biden is not in style. Almost, but not quite. He stayed the same as the country moved.

I realized just how much person-to-person contact in the political world has evolved when I went to an April 2 Chicago aldermanic election-night party.

It was fun to talk to the mostly young workers, all flushed with victory and the mistaken belief that politics can actually turn out well. I let their optimism wash over me, and I was even the recipient of a huge bear hug from 40th Ward Alderman-elect Andre Vasquez, who may have thought I was someone else. 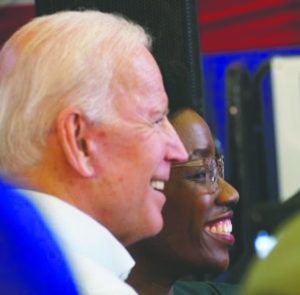 As the evening progressed, I looked forward to the end of the party, because I would then get a chance to share a rare experience.

At that point, campaign workers are prone to kicking off their shoes and dancing. I was looking forward to seeing that, and maybe even joining them. I’m not much of a dancer, but it’s often a memorable moment.

But when the workers danced Aug. 2, almost all of them refrained from touching each other. At times, it was kind of reminiscent, to me, of the way girls, abandoned by shy boys, dance on the edge of the junior high gym floor.

They were having a good time, I guess, but I feel weird dancing that way. So I caught up with Twitter and then headed home.

That’s one difference between me and Biden. He would have had no compunction about dancing whatever way he wanted to, because he is charming and, well, he’s Joe Biden. And whatever he did on the dance floor, you can bet others would feel more free to do, too. He’d help everybody have a good time.

When Biden wants to physically comfort a nervous politician in public, he can do things that I can’t. He’s adorable, he’s got that solid gold background, and, of course, those teeth.

I think women he settled down by applying a shoulder squeeze, or rubbed noses with, were pleased at the time, and if not pleased, certainly not horrified.

One lady said he ran his hand down her back, however, which is something that you just don’t do as a matter of course.

When I heard about that one, I flashed back to my first job in the newspaper business, selling papers in Chicago’s Union Station. As the commuters rushed toward our stand, I was posted behind it, making hectic change, and one of my co-workers stood next to me doing the same. She was my girlfriend’s best friend.

At some point, she ran her fingers down my back. I immediately handed somebody the Daily News instead of the Tribune.

When I got a chance, I gave her a look. She looked back and said, “What?” the way people do when they don’t care much whether you answer.

And I laughed. And she laughed.

What she had done was definitely inappropriate, but only until we laughed about it. Then it was an icebreaker, the thing that made her my friend, and not just the friend of my friend.

Of course, there’s a difference. She was not a man. And not an old man.

When somebody does something like this, it’s less likely to be cute if they’re an old man. Man is the last name, Old is the middle name, and Creepy is the first name.

April 3, Fox News commentator Tucker Carlson apologized on air for making a big deal about the former Vice President’s reputation as a “serial cuddler.” Considering Carlson’s far-right position on the political spectrum, his mea culpa may have been offered only to help further divide the Democratic Party over the issue.

But the words at least sounded sincere. At the end, he said, “A country where you’re afraid to touch other people is a country we don’t want to live in.”

That country, for Joe Biden, will probably be the one he’s living in for the rest of his life.

That same day, Biden released his own video explanation of his conduct.

“I’ve never thought of politics as cold and antiseptic,” he said. “I’ve always thought it’s about connecting with people, as I said, shaking hands, hands on the shoulder, a hug, encouragement.

“And now, it’s all about taking selfies together. You know, social norms have begun to change, they’ve shifted, and the boundaries of protecting personal space have been reset, and I get it, I get it.”

There were two other parts of that video that I haven’t seen quoted, and I’m a little surprised. In one, he says politics is about connecting with people, and he refuses to stop doing that. In the other, he said, “People know what I’ve been through.

“Scores of people come up to me and reach out for solace, something, anything that can help them get through the tragedy they’re going through.”

What Biden famously went through, right after he was first elected to the Senate, was the loss of his wife and daughter in a car wreck that also injured his two sons. When people, in their own life crises or not, meet Biden, they usually think of those days, and the admirable way he handled himself and what was left of his family. They also may remember that his son Beau died in 2015, and that’s why he didn’t feel up to running for President then.

It’s hard for a man with a background like that to treat the people he meets the way House Speaker Nancy Pelosi advises, as quoted in the Washington Post.

“Join the straight-arm club,” Pelosi said. “Just pretend you have a cold and I have a cold.”

One day in 2009, I was called into a newspaper conference room for a candidate endorsement interview. For some reason, long forgotten, someone mentioned that my sister, the estimable Lee Lenahan, had recently died of ALS.

And Toni Preckwinkle, sitting next to me, wordlessly reached out and held my hand.

Everyone in the room thought it was inappropriate.