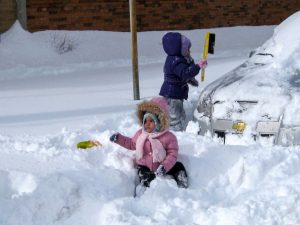 These children were photographed a decade ago, when the weather seemed to more fully define the way we lived each winter. (Irv Leavitt photo)

All I could see were her eyes. That was enough.

Each of the three times she rode in my cab, she wore a thick, ankle-length puffer jacket that looked like its last owner was the Michelin Man. She wore a hat and wound a scarf around her face.

Six visible square inches of Helen Gallagher were all I needed to become attached to the woman I would live with the next 24 years.

It was an unsurprising way to fall in love in wintry Chicago, a cold place full of warm people.

I like winter. Many mornings at 5 a.m., I would pull the cab out of the alley joining Lunt Avenue across from Eugene Field School, cutting the first paths through inches of new snow. I watched the trails lengthen in the rear-view mirror. It’s as close as I would ever come to performance art.

Just as I associate T.E. Lawrence with the Sahara Desert, Ernest Hemingway with Spain and Jane Goodall with the forest of Tanzania, I associate my own story with Chicago in winter.

My childhood was full of snow forts and snowballs and snowmen. I enjoyed — really! — shoveling snow through all the years of my youth, and long after that, at home and at many apartment buildings I was hired to maintain. I welcomed the inclemency of winter as a business booster during my years driving a taxi.

The risks were fun in those days. A plea over the radio brought help from a band of brothers for a dead battery, a cab stuck in the ice or a skid off the road.

Cabs from my old company used to wait for rides out of O’Hare Field on the edge of a runway, where in winter, the wind blew fiercely across acres of tarmac. We’d sit in each other’s warm cabs, smoking cigarettes and playing cards. If one of the cars refused to move, there was always someone to help.

One brutally cold day, everybody else got orders at once, and I headed back to my car to wait for mine. But all the doors and locks were frozen, and there was nobody left to help me. The nearest building was miles away.

In the biting wind, I fumbled with a disposable lighter to try to warm up the lock enough to thaw out the mechanism inside. It seemed unlikely, and I wondered if this was where my body would be found.

After almost an hour, a door miraculously opened. I drove down to pick up somebody at the old Butler Aviation terminal, almost deserted in the arctic weather. I walked in to get the passenger, as we did in those days.

When we came out, an unsympathetic cop was writing a moving violation ticket for leaving the engine running. “Some kid could have driven off with the car,” he insisted.

“If you see a kid out here, you should call DCFS,” I said.

When I went to court on the ticket, the judge was from East St. Louis, on a one-day exchange program. He called me a menace, and harangued me with no end in sight until an assistant state’s attorney quietly said, “That’s probably enough.”

The judge looked like he had been struck. Then he smiled crookedly and said, “Okay, you can go now.”

His chief judge decided it would be one of his last days at work for the state of Illinois. I think they put him in a home.

Before Helen, there were relationships with other women shaped by other winters. Once, I had left a lady’s apartment after deciding it could never work out. I walked up to the El, but it failed to arrive, blocked by snow.

I trudged back to the apartment and gave it another try.

Another morning on the El, there was no fresh snow, but the temperature was three degrees above zero. This was the day a motorman picked to misunderstand the track signals, and crashed our car into one stopped at a station.

The firefighters broke out all the windows to make it easier for us to bring out the injured. The wind howled through. By the time I left, my fingers had swollen to more than twice their size. It was impossible to dial a telephone, but it made for a better story when I finally got connected.

Few experiences can compare with watching a child, or a visitor from sunnier climes, delight in their first snowfall, snowman or snowball fight. You appreciate just how lucky you are to live where you do.

My old friend Jack Hicks and I used to spend winter lunch hours smoking cigars on a massive concrete platform behind the Highland Park water plant, high above Lake Michigan. Sometimes we would be surrounded by fantastic, towering free-form ice sculptures created by wind-driven waves. Jack, a library director, liked to talk about great literature and memorable moments in history and our lives, and the tons of glistening ice lent our discussions drama and weight.

Jack and Helen died, and I don’t smoke anymore. And the snow, ice and cold are no longer such regular features of winter life in Chicago.

Every winter has some cold and snow, of course, and difficult days. But it doesn’t last. The cab drivers and the Uber guys don’t make out in the winter the way they used to. And it’s been years since a kid came to the door, yelling, “Shovel your snow, mister?”

Nowadays, often as not, we have brown Christmases. Come New Year’s Eve, we usually don’t have to worry anymore that iciness will add to the alcoholic hazards.

Most Januaries, I see as many hoodies as puffer jackets. Sometimes, it feels like spring. Maybe that makes it easier to fall in love.