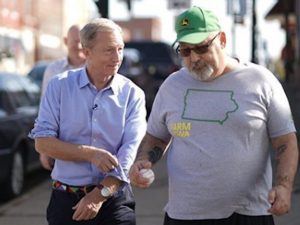 I’m not keen on voting for billionaire Tom Steyer, no matter how cool his father may have been.

Steyer, a hedge fund tycoon gone straight, had been running what amounted to a stealth campaign for the Democratic nomination for President of the United States until this month. That was when he finally managed, principally through the spending of very large amounts of money, to just barely qualify for October’s Democratic debate.

He had scored the required 2 percent in four polls — though not simultaneously — and had convinced 130,000 people to add money to his money. That’s what it takes.

Steyer says all the right things, as far as many Democrats are concerned, including promising to give half his loot to charity. But he doesn’t have a very compelling personal story. An adult life spent amassing an enormous fortune mainly through the labor of moving money from one building to another does not endear.

He has tried to cobble together an authentic story by repeating accounts of the lives of his late mother, father and grandfather, especially his father. Most of the lore is from days long before his birth.

“My mother was a schoolteacher in the New York Public Schools and in the Brooklyn House of Detention,” Steyer, 62, told the debate audience. “My father was the first generation in his family to go to college. My grandfather was a plumber. He interrupted his law degree to go into the Navy in World War II and he ended up prosecuting the Nazis at Nuremberg. And when I asked him what that experience meant, he said, ‘When you see something wrong in your society, you fight it from the first day and every single day after.’”

That’s why, he said, he’s been trying to defeat climate change and Donald Trump.

All that has not won me over. I might have liked the opportunity to vote for his mother or father, however. Maybe gramps, too.

I don’t think I’m alone. Here in America, we’re more interested in what you’ve done, not the stories you heard around the fancy gas fireplace that you didn’t have to chop wood for.

My father founded a small garment factory, closing it 10 years before I was born. It was his life experience, not mine. He talked to me about it, but that doesn’t mean I know how to sew.

Having witnessed many suburban election campaigns, I’m familiar with the phenomenon of candidates riding on ancestors’ coattails. I’ve seen many hopefuls whose most trying moments in life may likely have been riding the bench in Pony League or blowing the bar exam after staying up too late smoking doobies the night before.

Many voters might identify with the lack of hardship in candidates’ life stories. But even if that happens, once candidates finish talking about their families and their positions on hot-button issues, they realize there’s little to differentiate them from each other.

A surprisingly large number have tried to solve this problem by exaggerating their military service, such as converting stateside weekend warrior status to claims of military intelligence duty or even combat. Some have gotten away with it, but it’s pretty risky. 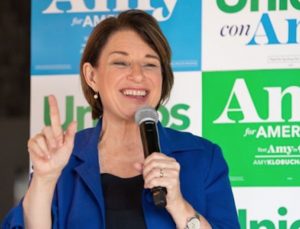 So, many candidates feel compelled to haul out their dead — or mostly dead — relatives. They may be the only thing interesting about them.

It won’t work for some candidates. There are a handful lining up for the Democratic primaries whose grandparents were alive in the century before last. Not a good look if you’re trying to take voters’ attention off your age.

Minnesota Sen. Amy Klobuchar, like Steyer, a long shot for the Democratic nomination, talks about her father, but she doesn’t extol him. She uses his story, which begins in suburban Minneapolis, to help her insist on using the millions from opioid-peddling pharma settlements for addiction treatment.

“This is personal for me,” she said at the October debate. “My dad, he struggled with alcoholism his whole life. And by his third DWI, they said to him, the prosecutor, you’ve got to face jail or you got to go to treatment. He picked treatment, and he was pursued by grace. And he has been sober ever since. And now he’s 91 and in assisted living, and he said to me last year, it’s hard to get a drink around here, anyway. But he still has an AA group that visits him there.

“And so for me, I believe that everyone in this country, including the people in rural America, have that same right to be pursued by grace,” Klobuchar, 59, added.

“Pursued by Grace: A Newspaperman’s Own Story of Spiritual Recovery,” is the title of Jim Klobuchar’s 1998 book about his alcoholism.

Amy Klobuchar didn’t mention at the debate that she avoided her dad for many years, making peace only when he finally went into rehab.

Political considerations aside, this, I think, is a family story many Americans can relate to.