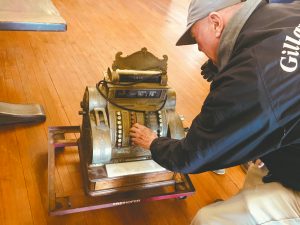 Jim Walgreen and the cash register he brought back to the Northfield Inn. (Irv Leavitt photo)

“Gradually at first, then all at once.”

That phrase, attributed to Mark Twain and several other long-dead writers, is intended to describe how bankruptcy takes place.

Pretty funny, as long as it’s not happening to you.

It occurred to me recently that the phrase can apply to a lot of other situations, too.

Those include the fates of our historical buildings. They hang on for generations, until suddenly, they don’t.

That thought came to me May 28 as I watched a gang of Northbrook guys wrestle a 19-foot hardwood bar from a trailer into the second floor of a former roadhouse from which it had been missing for a couple of generations.

The roadhouse is the former Bartelme’s Northfield Inn, which had stood since the 19thcentury on the northeast corner of Shermer and Waukegan roads, in what would become Northbrook. For decades, farmers and shopkeepers met there to drink and eat and figure out what to do about this place they were living in — would they, for instance, continue to slog everywhere in the mud, or tax themselves to build a sidewalk here and there?

By the 1970s, Northbrook was still pretty small, but it had changed, and that changed the way people viewed the Northfield Inn. Few people used it as a key place to exchange important news. Travelers no longer stayed upstairs. The bowling alleys that had been attached to the side of the roadhouse were gone.

The tavern had reportedly turned into what the millennials would now call a “dive bar.” It closed entirely at the end of 1973, as the value of the land it rested on superseded it. 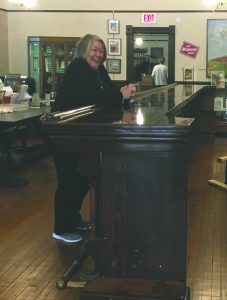 In 1974, some history-minded Northbrook folks acquired it just ahead of the bulldozers. They moved it to the south end of downtown Northbrook’s Village Green Park on Jan 17, 1975.

The history fans would restore the building, and rebuild the moribund Northbrook Historical Society around it. It would become their headquarters.

Since then, it has been used for just about everything a historical society needs. But there has always been one big problem.

People mostly recognize the building for what it was only because other people tell them. It doesn’t look much like a roadhouse.

That’s because shortly before the move, a Glenview gentleman named Jim Walgreen bought the bar, plus another bar stored in the roadhouse, and the “back bar” that went against the wall behind where the bartenders worked. He also got the old brass cash register, and a big glassed cabinet in which pint liquor bottles were stored waiting for sale.

The historical society had the tavern, but Walgreen had what made it a tavern.

He wanted to use the 19th-century bar in his house, but that never happened. He moved years later to New Hampshire, and it didn’t go up in his first house there, either. Eventually, it got installed in a different house, but he only enjoyed it for a short time. He got divorced, and put it in storage, so his wife wouldn’t get it along with the house, he told me.

It was still in storage a couple of years ago, when he called up the historical society and said, “I think I have something you might like.” 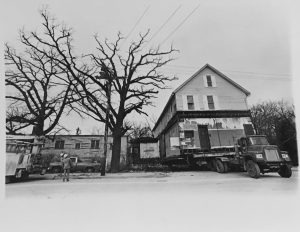 Judy Hughes, longtime president of the society, and her group had hoped and waited and planned for decades to get the bar back in the inn, so he didn’t have to say it twice, she said.

But it took a while before he got everything together to move it halfway across the country.

It had been so long gone that only one of the historical society veterans on hand last week had actually seen it there before. It was in the bad old days, when the place was just hanging on.

“I was 19. I thought I’d see what it was like while it was still open,” Moe Anderson said. “It was just a dark cavernous place with all these old guys sitting there. I had a beer and went home.”

By the time the bar made it back to the Northfield Inn, it had been on the way home for five decades.

To some extent, that’s not unusual. Most of us value artifacts of the past, like buildings and the things that are in them. We’re often surprised when suddenly, they’re threatened.

Bartelme’s had been on the way out for years. But there was no process in Northbrook law to slow or prevent its demolition. It’s not much different now. 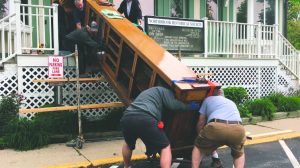 Glencoe, for instance, has a law forbidding demolition of a certified landmark building, but such certification can only come at the request of the property owner. That village also has an honorary landmark status, but it doesn’t stop anything.

It does, however, require that razing of such buildings be put off for 180 days, so that local historians can discuss the possibility of preservation with demolition-bent owners.

The first discussion in the current case of a Glencoe Frank Lloyd Wright house bound for demolition has taken place, Chicago Tribune freelance writer Dan Dorfman reported June 1. The owners of 238 Franklin Road were said to be at least open to the possibility of preserving the 1913 house, instead of building something else on its one-third acre.

It’s no surprise that there’s a lot of attention being paid to the fate of the house. Glencoe, unlike a lot of places, has an active Historic Preservation Commission, and Wright fans nationwide pay attention to the survival of the work product of their favorite architect.

Nobody’s said much about the shape the house is in. But in 2011, I took a walk around a Wright house in the same little subdivision, prior to its sale for a bargain price very similar to the $555,000 the Franklin Road house sold for in April.

Many people would have found that house difficult to live in. The hallways weren’t wide enough for people to pass side by side. The bathroom was so small that it was hard to avoid falling backward into the tub when standing at the sink. The basement was susceptible to leaks. The wiring was ancient. 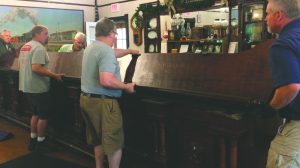 The eventual buyer planned to spend a lot to change the bathroom and make safety-related changes.  But a preservation-based state tax break means she pays about a third of the property taxes some of her neighbors pay. Under current Glencoe law, the new Franklin Road owners would have to certify their house as a landmark to get the break.

It is possible that if the Franklin Road house had been built someplace else, it would already be in a landfill.

And no one would be hitching up a trailer decades from now to bring it back.