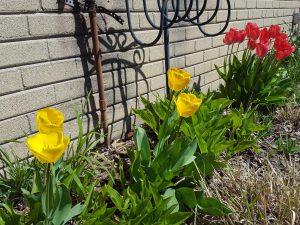 No matter what awful things are happening, tulips are still beautiful. (Photo by Irv Leavitt)

I got in a Red Line car at the Jarvis station with a few people aboard. They included a gent in a dirty winter coat eating a barbecue chicken dinner spread out on the seat next to him, and a particularly lonely fellow who had accosted me on the platform with the question, I kid you not, “How about that coronavirus?”

Everybody except the chicken-eating guy watched with mild interest as CTA personnel attempted to cause the doors of the train to open and close on command. Eventually, they gave up and asked us all to return to the platform so they could back the train up to Howard Street, where they could effect a repair, presumably so that the doors might always open up at stations and stay shut in between them.

It looked like few of the delayed passengers were in a hurry to go someplace else where they might be even more likely to catch a deadly disease from strangers. They seemed to be a little sad to see the track workers leave with the defective train. Some had followed them around with their eyes, hoping they would do something interesting.

I sat down on a bench on the most social-distanced seat from a young man in a blue mask. He muttered to me that only one car’s doors were balky, and that the CTA folks could have just locked that one up and proceeded. “That guy just wanted to go back,” he said, referring to the presumptive leader of the fellows in the orange vests.

Personally, having witnessed assorted mayhem on CTA tracks over the years, I was supportive of parking any train that had a possibility of tossing out riders on the curves. But I humored the young man, saying he had a point, only to find myself listening to three more of his whiny theories of why the train was taken out of service.

Finally, I said to him, “You don’t seem to understand the difference between hardship and entertainment.”

The truth is that pandemic life can be intensely boring between moments of sorrow and creeping invisible terror. A little bit of railroad maintenance drama can be welcome now and then.

There’s no use in being angry at those who are risking their lives to help us, even if they slow us down as we, too, try to help others. We have to remember who the enemy is.

It certainly isn’t a CTA crew chief who won’t condone rapid transit cars that don’t work right. It’s not doctors who insist that we cover our faces in public. It isn’t an NBA commissioner who sticks his neck out when everybody else is trying to save theirs.

Our enemies are those to whom our safety is a second consideration to their own interests.

When it comes to living with what we’re living with, there are at least three ways of reacting to what we’re seeing and feeling. We can be angry and denying. We can sort of go with the flow, letting the new normalcy float past, whether brutal or benign. Or we can stop and notice each moment, storing some away for a future when we’ll want to tell those who weren’t here.

Let’s hope we get that chance.

As I write this, I have had a week of pandemic-related setbacks, including the unavailability of a computer to write this column. Instead, it is being composed on a yellow legal pad. It’s not exactly life-threatening.

I’ve read the opinions of smart people who say that writing longhand activates a part of the brain that’s quiet when writing on a keyboard. You and I will test this theory together.

As I write, the sun is streaming through the kitchen window, blessing my effort without judgment. In another part of the house, someone I care about is typing at the only available computer work station, equipped with a vintage keyboard. It sounds exactly like pump water falling on a concrete splash block. It’s a sound I haven’t heard since I was a boy. I’m grateful to be reminded of doing meaningful, simple things that are connected to the earth.

Outside, tulips are coming up. I’ve seen tulips break out before. But they’re more beautiful now, because they’re alive and hopeful in a time of challenged hope and threatened life.

Like many people, I talk on the phone more, often to friends who years ago stopped using phones to just visit. We usually talk longer than seems prudent and economical in our 21st-century time-conscious lives.

We talk of things we should have spoken of before. “Your kids are in college? That’s great.

“Wait a second. When did you have kids?”

My daughter called, telling me that many of her neighborhood squirrels have gone rabid. The rabies may be caused by the migration of woodsy creatures to cities, invited by the quieter streets.

The squirrels fearlessly approach her back porch, where she and her roommates are now often taking meals. It’s an opportunity to spend a little more time in fresh air.

She sent me photos of some of her roommates leaping onto chairs and tables to escape a rodent and its poisonous saliva. That day on the porch has become everybody’s favorite conversation.

They know the difference between hardship and entertainment.

My kid says there are people who now have no choice but to do dangerous work for low pay, and dodging an occasional rabid rodent is nothing compared to that.

I find it interesting how little people are talking to me about money, though almost everybody has serious concerns in that area. For one of the very few times in our national lives, money alone can’t begin to solve a significant concern. The solution is more closely connected to patience.

The more patient we are, the more of us will survive. The smartest among us are becoming more generous with our time.

That has birthed a small miracle. For a generation, we have abused time, in service to money. Some of the places where that phenomenon was most in evidence are grocery stores. “Excuse me” has become code for “Get out of my way” in many aisles.

Now, with our wariness of each other’s breath, some of us patiently wait at the end of an aisle that’s occupied by a shopper studying a shelf.

I finally got on another Red Line train, and rode warily, separated from my fellow travelers by space and fear. But half the people I saw on my three-stage trip wore no masks. They included the fellow who had asked “How about that coronavirus?”

Before I could get out of the range of his voice, he told me that he didn’t believe the pandemic was such a big deal. It will be ironic if, after all my precautions, my loved ones and I have been killed by a man who pooh-poohed the risk.

As we all emerged into the sunlight, a woman escorted a little boy, the only child on the train. He greeted me with an enthusiastic “How ya doin’,” as if we had known each other his entire little lifetime.

It seemed likely that his mom had failed the impossible challenge of getting the rambunctious boy to wear an N95 mask like her own. Instead, he was using a polar bear mask left over from Halloween.

It was not ideal, but like the doctors say, any mask is better than none.

I wished him a happy day, and stored away the memory in my head. This may not illustrate the difference between hardship and entertainment, I thought.

But I sure hope it does.