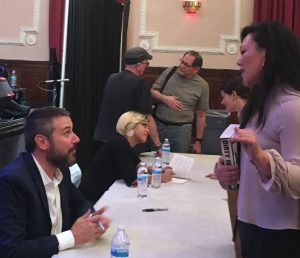 Conde Nast Traveler just named Chicago, for the second straight year, the best big city in the nation to visit. But for millions of people in this country, Chicago isn’t a place to visit, or a place where millions of people live and work.

It is a symbol, and not a good one.

It has gotten to the point that all President Donald Trump has to do is say the word “Chicago,” and everyone knows what he means.

It’s a lawless place where everybody is afraid of being murdered.

A national journalist named Jeremy Scahill came to Chicago last week to do a live podcast, and he started his “Intercepted” show saying what people who live in the city may be shy of saying.

“This city is not Trump’s dog whistle,” he told a full house at the Logan Square Auditorium. “It is his foghorn.”

“What the hell is going on in Chicago?” Trump asks at rallies. “Afghanistan is safer than Chicago.”

Trump, Scahill said, encourages fearful people to support him because he’ll try to protect them from what they’re afraid of, as he tells them, in thinly disguised code, that he’s afraid, too.

Friday, a month before the midterm election, Trump revved up the rhetoric, as he pretended to defend the Chicago Police Department against local African-Americans, who had undermined law and order by successfully fighting for their rights.

He took on the draft consent decree that’s intended to reform the Chicago Police Department, and will be the subject of hearings the end of the month. I doubt he’s even read it.

I have read the boring, 228-page draft agreed upon by the city of Chicago and the Illinois Attorney General. It was an experience that made me want to remove my eyes with a spoon.

I have also read the more lively 11-page paper in opposition to the decree, filed Friday by the U.S. Justice Department.

Removing my eyes would not be enough for this one. In order to accept its premise, I would have to remove my brain.

Its main point — that interfering with the operation of the police department would tie the hands of the police and local authority — sounds a lot like stuff you might have heard in Alabama in the 1960s. Not coincidentally, that’s the place and time in which U.S. Attorney General Jeff Sessions learned how to do government.

The consent decree is more complex, but it has two big aims that anybody can understand.

One is to reduce the incidence of unwarranted police use of bullets, Taser juice and batons. The other is to promptly send along complaints about such use to a defined, independent panel, instead of sitting on them until after an election.

If in place, this decree would have mitigated the considerable local and national angst generated by the belated release of the video of the (now-officially unnecessary) shooting death of Laquan McDonald. It might have prevented its occurrence altogether.

That incident has definitively explained, for everyone paying attention, the real reason why minority residents don’t help Chicago Police identify lawbreakers as much as they should: they’re reasonably unsure of whose side the police are on.

On Dec. 1, 2015, four days after the release of the video, Illinois Attorney General Lisa Madigan called for a federal investigation of the Chicago Police Department.

She said if the people of Chicago were ever going to trust the police, they had to believe that the police can honestly police themselves, or, at least, that someone trustworthy would be watching.

She used the McDonald killing as an example, as well as the path of destruction left by CPD torture aficionado Jon Burge. Commander Burge managed to escape the police department into retirement with his pension and freedom intact, despite the knowledge of his decades of criminality by at least one Chicago mayor.

Burge, who apparently helped convict dozens of innocent black arrestees, cost the city more than $57 million in settlements, plus millions more defending him and his detectives. Fired 25 years ago, he died Sept. 19 at his retirement home in Florida, having never been charged with anything but lying in court. He served four years for that, released in 2014. He was still getting pension checks when he died.

Former U.S. Attorney General Loretta Lynch ordered the investigation of the CPD three days after being asked. It was finished in January, 2017.

It was then announced that Chicago had agreed with the feds to seek a consent decree, in the wake of an investigation that included interviews with “city leaders, current and former police officials, and numerous officers throughout all ranks of CPD,” the Justice Department said at the time.

“The department also accompanied line officers on over 60 ride-alongs in every police district; heard from over 1,000 community members and more than 90 community organizations; reviewed thousands of pages of police documents, including all relevant policies, procedures, training and materials; and analyzed a randomized, representative sample of force reports and the investigative files for incidents that occurred between January 2011 and April 2016, including over 170 officer-involved shooting investigations and documents related to over 400 additional force incidents.”

That’s a lot of work, and it resulted in a pretty negative conclusion. The Justice Department found that “CPD officers’ practices unnecessarily endanger themselves and result in unnecessary and avoidable uses of force (due to) systemic deficiencies in training and accountability, including the failure to train officers in de-escalation and the failure to conduct meaningful investigations of uses of force.”

The decree’s draft worked on by the feds, city and other parties was released in early August. It’s said to be similar to other consent decrees fashioned for 23 other American cities, all of which have seen marked decreases in lawsuits over police misconduct, according to a University of Texas-Dallas study.

The current U.S. Justice Department leadership sees things differently. For one thing, it excoriates the framers for the budget to hire a panel to monitor the police.

“The Monitor costs alone will be staggering,” the DOJ paper maintains. “The Monitor can be paid up to $2.85 million per year — more than 10 times both the Superintendent’s salary and the Mayor’s salary, and 59 times the starting salary for CPD officers.”

This expense, if put into Earth context, looks less daunting. The police already use 40 percent of the city’s annual corporate fund budget, which totals about $3.7 billion.

A seemingly more substantive claim lies in the DOJ assertion that murders went up 57 percent after the ACLU won an agreement with CPD in 2015 to curtail “stop-and-frisk.” There was no mention, however, that murders went back down after that, with no discernible further change in practice.

Also unmentioned was the fact that, according to the agreement, CPD continued to stop-and-frisk, and made no changes in who it stopped and frisked. It still maintained that those who were stopped were those reasonably suspected of carrying something illegal, not just those who were detained for the crime of being black or brown.

That’s what was going on in New York, and that’s why a U.S. district judge wrote, in 2013, that it was unconstitutional, in Scheindlin v. the City of New York.

The department of justice claims the consent decree is inflexible, but a reading indicates otherwise.

For instance, in a paragraph requiring that police officers use a now widely employed tactic of slowing down standoff situations instead of shooting, a key sentence reads, “CPD officers must use de-escalation techniques to prevent or reduce the need for force whenever safe and feasible.”

The term “safe and feasible” is used another 14 times throughout the consent decree, which features other similar terms such as “except in extreme circumstances,” “unless the officer can reasonably” or “unless doing so would be unsafe, impractical, or impossible.”

The DOJ claims it doubts that the city will really do the decree-required hiring to sustain the production of extra reports on use of force. It does seem reasonable that such reports should be generated, under any circumstances, including for the situation the city is known to have debated, then agreed to. Officers would, indeed, have to file a report whenever they point a gun at someone.

If such activity is so prevalent that notification is burdensome, that’s a problem, especially since some officers have said they have retired without having unholstered their firearms more than a handful of times. Some say they never have.

The Department of Justice, in its statement, asserted that the very existence of a consent decree would harm the flexibility that local officials need to alter police tactics. This ignores the ability of governments to petition courts for changes.

In the Chicago case, however, change was brought about as much by local activists as government officials, said Charlene Carruthers, a Chicago community activist who was a guest on Scahill’s podcast.

She notes that she and other activists went after the three officials they assert were behind delay in prosecuting McDonald’s killer, Officer Jason Van Dyke.