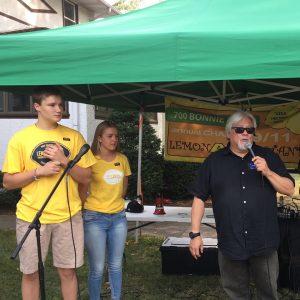 In the years since the kids of the 700 block of Bonnie Brae in River Forest raised $400 selling lemonade on the first anniversary of the Sept. 11 terrorist attacks, the event has grown beyond anyone’s imagination.

Event co-founder Patty Henek recalls her young children and the other kids on the block simply wanting to create something that would offer an upbeat, positive message in response to that horrifically negative day in American history.

This past Sept. 11, the 700 block of Bonnie Brae was crowded with people and flooded with a warm and joyous positivity as a reported 3,000 people stopped by to drop a few dollars in a large jar, enjoy lemonade, popcorn and ice cream, and generally celebrate all that is best about America.

In process, they raised around a hundred times the amount they raised at that first lemonade stand back in 2002. While the final figures won’t be in a few more days, this year’s cash haul should be upwards of $40,000. All of it will go to a program aiding kids in a neighbor not very far from River Forest geographically, but a world away financially, Kidz Express in the west side Chicago South Austin neighborhood.

“Anyone on the block can nominate a charity,” Henek said. “We compile a list, and have an email vote.”

The top three or four vote getters are invited in to make a presentation. And this year, unlike the last several years, one garnered so much support that it was the only charity picked. The choice was nearly unanimous.

Henek said her goal is always to double what they raised the year before. The last two years that take has hovered around $37,000.

“I’d be ecstatic if they doubled it,” Kids Express executive director Doug Low said Monday. “For $3,000 or $4,000, I can hire a part-time mentor. Mentorship, he said, is central to all they do.

Low recited some of the sad and daunting statistics that beset the community he’s chosen to serve.

“There’s 91 percent unemployment in Austin for its youth,” he noted. That is coupled with shooting and murder rates that over the past six years are the highest in the city of Chicago.

The lure of the streets and gang activity is ever present for children growing up in Chicago’s West Side. But while that may seem to offer an alternative, it offers no real future. 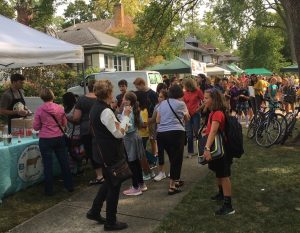 Low said the best way to steer kids away from bad choices is for them to see the example set by a mentor who has made better choices.

“Not only do we hire these kids, but they’re off the streets, they’re mentoring younger kids” Low said. “Our philosophy is really simple: What better mentor can you have than someone who’s 18-22 years old who grew up in your neighborhood, who dealt with the exact same issues you’re dealing with, who’ve made positive decisions.”

“It started off as a jobs training program,” Low said of the 18-year-old program. Teaching skills such as how to do a resume, how to fill out an application, to show up on time, handle a time sheet and work tasks.

“It gives us the opportunity to teach that there are consequences to their actions.”

Low said his program accepts kids starting at age 5. Starting at 14, kids are taught how to mentor others. From 16 to 18, they are mentors, and after 18, senior mentors. It is a progression that never really ends, as life skills are learned and passed on to others.

One of the most important lessons KIdz Express teaches its young clients is how to navigate the larger world beyond their neighborhood.

“Our kids don’t know how to deal with white people,” Low said, adding that many South Austin youth only see whites in their area when they hop off the Eisenhower expressway to cop heroin.

“They’ve never really been exposed to white people in their lives. And part of trying to teach them about the greater world is that it’s an integrated world, and get them out of their neighborhood.”

Monday’s event was not the first time Kidz Express has benefitted from largess from the River Forest community. Several years ago Low was given $50,000 by the Grace Lutheran Church congregation, just four blocks north of the LemonAid event.

“They’re one of our biggest supporters.” Low said. “They’ve given us nearly $100,000. We could not have bought the building if it wasn’t for them.”

Moving to the former George Leland school building allowed Low’s program to expand from 50 kids daily. “We turned kids away because we were in a small building,” he said. “Now we service 200 kids a day.”

Low said he appreciates the support from people in River Forest and elsewhere.

“It makes me feel grateful, because two things are coming out of it,” he said. “It allows me to expand my program. And it’s also creating a bridge between this community and that community.”