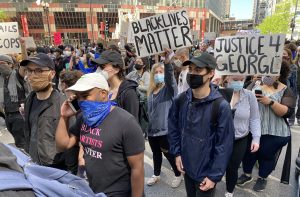 Cleanup efforts continued in Downtown Chicago as the Illinois National Guard was called in and a citywide curfew remained in effect in the aftermath of weekend violence that included calculated business burglaries.

“I am hurt and angry with those who tried to hijack the moment to wreak havoc and destroy,” Chicago Mayor Lori Lightfoot said Sunday, commenting on looting and devastation that followed peaceful protests in the city over the death of a black man in Minneapolis at the hands of police.

“You have dishonored yourself, your family and your city,” Lightfoot said of the looters. “You need to think long and hard about what you can and should do.”

To help keep order in the city, 375 members of the Illinois National Guard were called in Sunday to support efforts of the Chicago Police Department, Gov. J.B. Pritzker and Lightfoot said.

“It was not an easy decision,” Lightfoot said of calling in the National Guard, “but it is surely the right decision.”

The city had also instituted a 9 p.m. to 6 a.m. curfew as of Saturday. Lightfoot said the curfew would be in effect until further notice.

“We need to turn our pain into purpose,” a tearful Lightfoot said at the end of a Sunday morning press conference.

Pritzker said National Guard troops will be in a supportive role to Chicago police. He said the 375 Guard members will be handling street closures Downtown.

Brigadier Gen. Richard Neely of the Illinois National Guard said that soldiers with the Guard’s 33rd Police Battalion, who have training as military police, will be carrying out the limited mission of aiding Chicago police with street closures.

“We are committing to protecting every citizen and that their rights are not stepped on,” Neely said.

“It’s hard to find the right words to say and words alone don’t cut it anymore. I see the pain etched on the faces of my black friends and colleagues,” Pritzker said of George Floyd’s death in Minneapolis. “We need real criminal justice reform.” 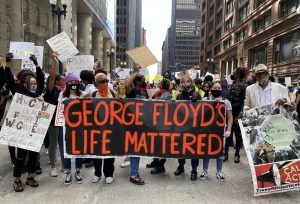 Cook County State’s Attorney Kim Foxx said that those who do damage in the city will be held accountable.

She said the looters are taking the attention away from issues that need to be addressed.

“They are using criminality to poison the conversation,” Foxx said at a Sunday afternoon press conference. “… In the last 24 hours, we are talking about structures instead of structural racism.”

Foxx, who grew up in Chicago’s Cabrini Green public housing complex, said Sunday was the first time since March 18 that she had been in the city. Foxx said she was encouraged driving in when she saw the Chicago skyline, “but my heart was broken when I saw the boards on the windows.”

Foxx said the video of Minneapolis police officer “with his hand in his pocket, with a casual disregard for life, without a care in the world” while a man gasped for breath under him was disturbing.

She said the outrage being shown in the wake of George Floyd’s death is people lashing out.

“What we have seen in this country is broken hearts and anger. People are angry. I am angry. What’s not acceptable is what I saw last night,” Foxx said Sunday.

She called the local looting “awful.”

“This is being done by people who don’t care about systemic issues, but shoes for profit,” Foxx said.

Chicago police arrested more than 120 people Saturday as violence continued in Chicago’s Loop in response to the death of George Floyd and other blacks killed by police in the United States.

Floyd apparently died of suffocation when Minneapolis police officer Derek Chauvin placed his knee on Floyd’s neck to restrain him during an arrest.

Video footage of Floyd pleading for air and calling for his mother has sparked outrage and riots around the country. 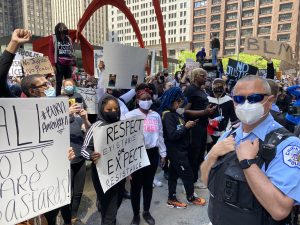 “I hope that we can get justice for George Floyd and his family,” said one protester at Federal Plaza on Saturday afternoon.

On Friday, Chicago protests became violent when storefront windows were damaged overnight Downtown. The violence continued Saturday as protesters looted Macy’s on State Street. Also, vehicles were tagged with graffiti and the CTA shut down all lines.

Chicago Ald. Brendan Reilly (42nd Ward), who represents the Downtown area, said that he and his constituents had a front-row seat to Saturday’s devastation.

“The damage is widespread and incredible,” said Reilly, who was up all Saturday night monitoring activity in his ward.

“These were not crimes of passion. They were well-thought-out,” Reilly said of the looting. “You don’t go to a peaceful protest in a U-Haul.”

He noted that nearly every branch bank and many ATMs in retail establishments in his ward were targeted. He added that pharmacies, with an array of prescription drugs, were also hit by looters.

“It’s a horrendous thing that has happened,” Reilly said. 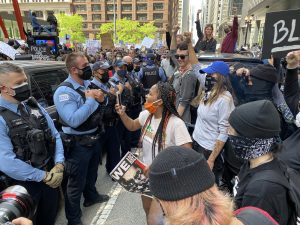 Retail outlets, including Oakbrook Center, Harlem-Irving Plaza, Orland Square, and Target stores in Melrose Park and Lemont, had closed Sunday afternoon because of incidents or as precautionary measures.

Eighty Cook County Sheriff’s police officers, including members of the Hostage/Barricade Team, were mobilized Sunday afternoon to assist Chicago police and south suburban police department in their response to protest.

“The Sheriff’s Office fully supports the right to peacefully protest and asks that everyone please respect the safety and property of those around them,” the department said in a statement.

“The police … they have no respect for our humanity,” said one protest leader on Saturday, using a megaphone at what was meant to be a socially distant protest at Federal Plaza (50 W. Adams St.).

Cardinal Blase Cupich, archbishop of Chicago, said in a statement Sunday that steps need to be taken to heal the wounds that have been in America since slavery.

“I will not pretend to speak with any authority about the challenges people of color experience in our society,” Cupich said. “I do not share the fear they put on when they and their children leave their homes every day. I do not know what it means to be ‘other.’ But I know there is a way to fix it.  And the fix begins when we stop talking about the proportionality of ‘their’ response and start talking about the proportionality of ‘ours.’ Surely a nation that could put a man in space, his safety assured by the brilliance of black women, can create a fair legal system, equitable education and employment opportunities and ready access to health care. Laws do not solve problems, but they create a system where racism in all its forms is punished and playing fields are leveled.

“The COVID-19 pandemic has been called a great equalizer. It has been even more a great revealer of societal cancers as deadly as the virus. As others have pointed out, health insecurity kills, and poverty is poison. We can and must make a society that views the soaring of a child’s potential with more joy than the soaring of a rocket.

“I stand ready to join religious, civic, labor and business leaders in coming together to launch a new effort to bring about recovery and reconciliation in our city.  We do not need a study of the causes and effects. Those answers can be found on the shelves of government offices and academic institutions across our burning nation. No, we need to take up the hard work of healing the deep wound that has afflicted our people since the first slave ships docked on this continent. And we need to start today.” 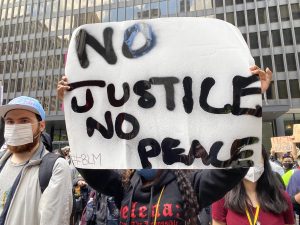 Chicago police Supt. David Brown said that officers will be working 12-hour shifts and that all days off have been canceled as the city deals with the violence.

“We need everyone on board as we try to rebound,” Brown said. “We will not sacrifice democracy for lawlessness.”

He thinks the current wound for the city “will take a long time to heal,” but that it can be done.  Brown, who is African-American, said he remembers at the age of 21 talking with his father about wanting to be a police officer.

His father, who had suffered injustices under Jim Crow laws, could not believe it.

“My dad, my old man said, ‘Why do you want to associate with people who want to mistreat us?’ I told him, ‘How will it ever change if we don’t serve?’”

Brown encouraged individuals, many of them around the age of 21, who used the protests to wreak havoc over the weekend, to think and to act for the betterment of their community.

“Rather than act they choose to burn and destroy,” Brown said.

He said he was proud of the way Chicago police handled the assault from rioters. He said officers were belted with bottles and debris, punched, and even dragged.

More than 20 officers required treatment at hospitals, with two of them requiring surgery.

He said that police vehicles were spray-painted, had windows broken out, were flipped, and were burned.

“This is a nation of laws,” Brown said. “Lawlessness has no place in Chicago or anywhere else.”

Jahmal Cole, CEO and founder of My Block, My Hood, My City, an agency that works to provide underprivileged youth with an awareness of the world and opportunities beyond their neighborhood, said George Floyd’s death is another sign of the troubled relations of blacks and white police officers.

Cole said rather than resorting to violence though, frustrated individuals should give 15 words some thought.

“What is something simple I can do to have a positive impact on my block?” Cole said.

Social distancing was advocated for the peaceful protests and people wore PPE masks or bandanas over their faces.

But six-foot social distancing was simply not happening on the crowded plazas and streets.

The spotty aroma of marijuana and cigarette smoke prevailed on a breezy sunny day.

“We just want to live,” said one caravan motorist who drove solo.

The protest began shortly after lunch with car caravans around area jail and juvenile detention centers before arriving at Federal Plaza for the 2 p.m. protest.

That protest was also meant to address the killings of Ahmaud Arbery, a black man shot dead in February by white men in a South Georgia neighborhood, and Breonna Taylor, a black woman killed in March by police in her home in Louisville, KY, according to a Facebook event host page.

“These murders are outrages that demand justice and national protest. We stand in solidarity with the uprising in Minneapolis,” organizers wrote on the Facebook page.

“Yet another murder of an unarmed Black person in the month of May. George Floyd in Minneapolis; Ahmaud Arbery in Atlanta; Breonna Taylor in Louisville,” was posted on the page.

One protester in Chicago was seen carrying a large black flag and jumping on a Chicago police van.

“Why don’t you protect us like that?” asked the protester.

Officers in this instance remained silent, not verbally responding to swearing and catcalls.

One profanity-laced protester yelling at an officer appeared to be in his late teens, spewing anger at a police officer who looked like he could be his father or grandparent near retirement age.

The protest then became a march to the north down Dearborn Street where the car caravan and protesters merged. They then went around the block along Daley Plaza.

Many protesters kept chanting George Floyd’s name as they walked, rode bicycles, or transported themselves by preferred means such as scooters or mobility devices.

Some signage showed that people were not happy with the manslaughter charge connected to Floyd’s death.

Derek Chauvin was charged with third-degree murder and manslaughter Friday.

However, a Hennepin County, MN medical examiner report did not support a diagnosis of traumatic asphyxia or strangulation in preliminary results of Floyd’s autopsy.

One young unnamed female protester on Saturday in the Loop held a homemade poster and cheered on motorists in the caravan.

“I have hope for the future that our generation will be able to fix these problems,” she said.