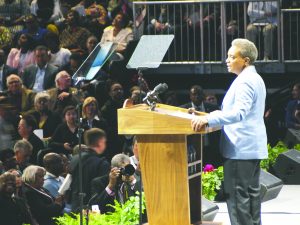 Chicago Mayor Lori Lightfoot gives her inaugural address after being sworn in Monday as the city’s 56th, and first black female and openly gay, mayor. (Photo by Kevin Beese/Chronicle Media)

Lori Lightfoot looks at the Chicago flag a little differently these days.

Not just because she now governs the metropolis the flag waves over, but because the four stars on the flag are symbols of her vision for the city.

“Each star stands for building and rebuilding,” Lightfoot said of the flag’s stars, which stand for the construction of Fort Dearborn, the Great expositions of 1893 and 1933 and the reconstruction of the city following the Chicago Fire.

“Today, we proudly reinterpret these four stars; new meaning for a new city, with new challenges and opportunities that lie ahead guiding our city and guiding our new administration as we move forward and rebuild again,” Lightfoot said during her May 20 inaugural address.

She re-imagines the stars as safety in every neighborhood, education, stability and integrity.

Lightfoot became the first black woman and the first openly gay person to govern Chicago when she took the oath of office May 20 at Wintrust Arena.

In her inaugural address, Lightfoot called for everyone to work together for the betterment of the entire city.

“We are and must be in this together,” Lightfoot said. “… We cannot fail. We will not fail; we are Chicago.”

While calling for a spirit of cooperation, Lightfoot put the city’s 50 aldermen — 12 of whom took the 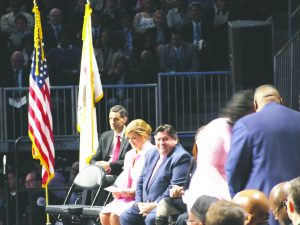 Illinois Gov. J.B. Pritzker watches as Melissa Conyears-Ervin heads back to her seat after taking the oath of office for city treasurer. (Photo by Kevin Beese/Chronicle Media)

oath for the first time — on notice that it will not be busy as usual under her leadership.

“When public officials cut shady backroom deals, they get rich and we get the bill,” Lightfoot said.

In addressing her vision for the city, Lightfoot touched on:

The new mayor said the city would develop a proactive safety strategy with the communities hardest hit by gun violence.

She plans to create a Mayor’s Office of Public Safety, led by a deputy mayor. Lightfoot said the office will be charged with developing and implementing a violence-prevention strategy connecting efforts across city government, other aspects of the private sector and nonprofit, philanthropic, education, recreation, business and faith communities.

“The devastation of violence is far and wide which is why we will also reach out and support the growing community of victims and witnesses,” Lightfoot said.

“We cannot attract families to Chicago and keep families here without providing a quality public education for every child and that means every single child,” the mayor said. 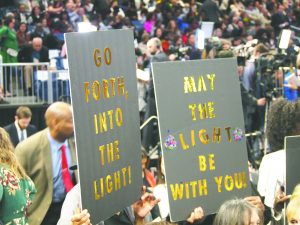 Lightfoot said she would work to expand early childhood education and the promise of a good education through high school and college to every child, no matter their path forward. The city will work with businesses and unions to set up apprenticeships for young people wanting to learn a trade, Lightfoot said.

The mayor said that the city would also work with employers in the city so that students can get business experience in school and be job-ready the day they graduate.

“Our goal is simple: starting in our schools, we will create a citywide workforce as the pipeline for jobs of today and tomorrow that will be the envy of the world,” Lightfoot said.

“Over many, many years, Chicago dug itself a giant financial hole,” Lightfoot said. “We have an outsized structural deficit, a persistent and growing pension debt and other costs that threatens our financial stability. We are spending a significant percentage of every dollar just to service our pension debt alone and too much of that money is being sent to banks and Wall Street bond firms instead of going to rebuild our neighborhoods, reduce our property taxes and revitalize our transportation system.”

Lightfoot said her team is analyzing the city’s fiscal challenges and coming up with a range of possible solutions. When that analysis is complete, she said, a plan to put Chicago on the path to solvency would be laid out. 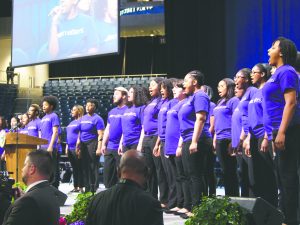 Members of the After School Matter Choir perform during the inauguration. (Photo by Kevin Beese/Chronicle Media)

She admitted that hard choices would have to be made, but said that the decision would be made with transparency and integrity “without balancing budgets on the backs of low-wage and working-class Chicagoans.”

“I know putting Chicago government and integrity in the same sentence is, well, a little strange,” Lightfoot said, “but that’s going to change. It’s got to change. For years, they’ve said Chicago ain’t ready for reform. Well, get ready, because reform is here.”

She said that no official in the city, elected or appointed, should ever profit from his or her office.

Lightfoot has already signed an executive order ending aldermanic privilege, stripped aldermen of some of their power.

“This does not mean our aldermen won’t have power in their communities. It does not mean our aldermen won’t be able to make sure the streetlights are working or the parking signs are in the right place or any of the thousands of good things they do for people every day,” Lightfoot said. “It simply means ending their unilateral, unchecked control over every single thing that goes on in their wards. Aldermen will have a voice, not a veto.”