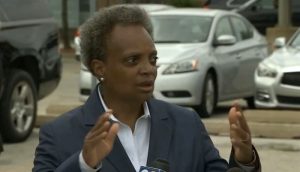 Chicago Mayor Lori Lightfoot takes questions from the media Monday, Aug. 10 after a night of unrest and looting in the city. (Credit: Blueroomstream.com)

SPRINGFIELD — Chicago Mayor Lori Lightfoot said she remained opposed to calling the Illinois National Guard into her city after a night of looting and unrest that led to more than 100 arrests.

At a joint news conference on the morning of Monday, Aug. 10 with Gov. J.B. Pritzker, Lightfoot shut down the idea after taking questions on President Trump’s repeated offer to send in federal troops.

“Both of us believe this is not an incident that requires the National Guard,” she said of herself and the governor.

In line with her previous statements on federal involvement in the city, Lightfoot said she would welcome resources and legislation at the federal level that would help Chicago law enforcement fight crime. Those include gun control legislation to prevent weapons from being brought into Illinois from other states; funding for the Bureau of Alcohol, Tobacco, Firearms and Explosives, or ATF, to prevent the sale of guns to straw purchasers; and stronger federal oversight of licensed gun dealers.

“We need that help from the federal government. I’ve asked for that repeatedly. I’ve never heard an answer from the president,” Lightfoot said.

Her reluctance to accept federal aid stands in contrast to a statement from Illinois House Republican Leader Jim Durkin, who decried the situation in Chicago Monday morning.

“Once again, Illinois government has failed to protect its residents and businesses. It is time to bring in the National Guard and accept any and all federal assistance to stop the chaos that is destroying our state. No more excuses. No more failures,” the Western Springs Republican said in the email statement.

“I implore our leaders at the city, state and federal levels to do everything they can to ensure those who perpetrated these crimes are prosecuted to the fullest extent of the law, and that all measures are taken to ensure our residents and businesses remain safe,” Brady wrote.

Both Lightfoot and Pritzker said the state and city were cooperating and emphasized the need for criminal charges.

“These were criminals. People who broke in, who were shooting at people,” Pritzker said. “We had 13, I believe 13 Chicago police officers who were injured last night. This was criminal activity, those criminals need to be held accountable.”

Cook County State’s Attorney Kim Foxx, whose office is in charge of prosecuting criminals in the area that includes Chicago, has been criticized for being too lenient on individuals arrested for allegedly looting and rioting during summer protests against police brutality related to the death of George Floyd.

A report released by the Chicago Tribune Monday morning showed that in her first three years as a state’s attorney, Foxx’s office dropped all charges against nearly 30 percent of felony defendants, or more than 25,000 total.

The vast majority of charges dropped were for “narcotics offenses,” or drug crimes, which was a policy choice as part of the criminal justice reform platform Foxx explicitly ran on in her race to be elected top prosecutor in Cook County.

When it came to violent crime, Foxx’s office dropped charges at a similar rate to her predecessor.

During a press conference with Chicago Police Superintendent David Brown, Lightfoot said there weren’t enough consequences for people who engaged in illegal and violent activity during the George Floyd protests. Despite Foxx’s office being responsible for prosecuting those crimes, Lightfoot, who endorsed Foxx in her election, became agitated when asked by a reporter if the state’s attorney was to blame.

“Don’t try to bait us, mischaracterize, pit one against the other — we’re not playing that,” Lightfoot said.

At her own press conference Monday afternoon, Foxx noted that in 2017, 2018 and 2019 — the three years analyzed by the Tribune — violent crime, shootings and homicide rates dropped in Chicago.

“In the wake of 2016’s violence, we saw communities come together… We cannot talk about ‘all hands on deck’ and seek simple solutions to complex problems, we must continue to work together,” Foxx said.

Foxx acknowledged her office enacted a policy not to prosecute peaceful protestors arrested in May and June, but said conflating peaceful protestors with rioters and looters, whom her office has prosecuted, was wrong and disingenuous. According to Foxx, the majority of charges filed in Cook County during those protests were misdemeanors and municipal violations.

In 2020, murders have risen nationally even while crime and violent crime have both fallen compared to previous years. Based on these statistics, Foxx said that what happened downtown on a “random Sunday night, looting in the middle of Michigan Avenue” was indicative of a trend that has no simple solution.