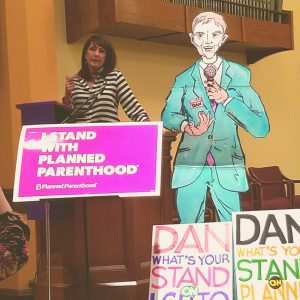 It seems Republicans aren’t the only members of congress who are ducking constituents and refusing to hold town halls.

Members of the 3rd Illinois District have grown frustrated with Rep. Dan Lipinski’s reluctance to meet with people in his territory, which stretches from the South Side of Chicago to Lockport in Will County.

Last week, 3rd District residents gave up and scheduled a town hall for March 24 in a Berwyn church where they asked their policy questions to a cut-out cardboard Lipinski. Even a potential challenger for his congressional seat came and spoke to “Flat Danley.”

“Lipinski’s staff said he only holds two town halls a year and he just had one in January,” said organizer Marla Rose. “They said we’d have to wait until fall for another one.” About 50 people attended the town hall at Unity Lutheran Church on 31st St.

Organizers admitted the chosen date turned out to be bad. March 24 was the day the Donald Trump-Paul Ryan’s repeal of the Affordable Care Act was deemed dead-on-arrival in the U.S. House. Lipinski was in D.C. that day to vote, his staff said.

“We did invite him, and we’ll be sending him a video,” said Rose.

The Congressman is “out of touch with the needs of the district,” participants said.

Most out of step was the congressman’s “pro-life” voting record and support for defunding Planned Parenthood. Participants also said Lipinski was not in favor of marriage equality. Lipinski also supported legislation allowing merchants to discriminately refuse to serve certain customers for religious reasons, they said.

“He votes his personal conscience and religious beliefs instead of representing the district,” said Chris Martin, of Berwyn, before the meeting.

“When you look at his record, there’s a lot of opposition to things [my wife and I] feel very strongly about,” said Derek Jansen, 37, of the 3rd District. “He’s not a Democrat, he’s a Republican. We are getting the word about what his voting record and stance really is, and that will awaken a lot of people.” 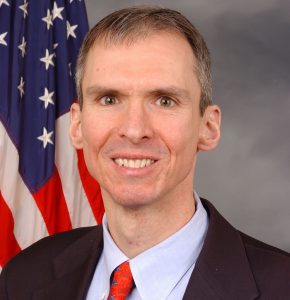 Lipinski was sworn in in 2005, inheriting the seat from his father, Rep. William O. Lipinski, who won the nomination and promptly announced his retirement. As 23rd Ward Democratic Committeeman, the senior Lipinski was able to job his son into the congressman’s seat without an election. The younger Lipinski has been challenged several times in the Democratic primary, but never defeated.

The gathering brought together members of the “Indivisible” activist group chapters in Berwyn and Western Springs, as well as other parts of the 3rd District, which stretches from Chicago to the Southwestern Suburbs in Will County.

Mary Quinlan, of Western Springs said Lipinski is not willing to use technology to reach out to constituents.

“He says the way he’s accessible is if you see him in Western Springs at the Menard’s when he’s home on the weekend,” she said. Quinlan and three others brought a request for more communication when they snagged a meeting with Lipinski at his Archer Avenue office in Chicago, she said. “He wasn’t interested in that at all,” she said. Nor has Lipinski ever shown any desire to poll or survey constituents to find out what they want, she said. If he did, he’d find that residents want strong leadership, especially when the Democrats are in the minority in Washington, she said.

At the event, people read questions regarding education, immigration, LGBTQ issues, healthcare and the environment.

“Mr. Lipinski,” said Jim Lisse, to the cutout, “from some of the information I have here, [immigration] is one topic you’re not that bad on. You may be even good. It’s hard to tell because you’re not here.”

Health insurance coverage under the Affordable Care Act was a hot topic. Martin, a retired Army reservist and optometrist, said he works with low-income patients in poor Chicago neighborhoods. Since ACA was passed, many patients— often women— are getting their eyes checked for the first time in 20 or 30 years, he said. He is able to start sight-saving treatments for patients who will most likely end up blind, he said. “If ACA goes, they’re all back out on the street.”

ACA still has problems that the Democrats should have worked to fix, especially extortionist prices charged by the drug companies, said Katherine Einhorn of Palos Hills. Identifying herself as a leukemia patient, Einhorn said her daily chemo medicine “that I take to stay alive” costs $8,200 per month. “I don’t pay that, but that’s what the pharmaceutical company charges my insurance … . It costs the pharmaceutical company $156 to make a 30-day supply,” she said. She also said the disability assistance, Medicare and Medicaid systems do not work together. A Medicare premium of $105 paid by Medicaid pushes her above the poverty line and makes her ineligible for medical co-pays that would have otherwise been paid by Medicaid, she said. Now that ACA was still viable, she said Democrats and Republicans should work together to fix it.

A potential challenger for Lipinski, Marie Klaasen Newman, of La Grange, a former corporate businesswoman and mother of teens is finishing an exploratory campaign to run against Lipinski. She has finished “five to six months of analysis and data work” and spoken to at least 1,200 people at coffee sessions throughout the district, she said. Newman is facing a daunting challenge financially. Lipinski’s war chest has around $1.2 million, cash-on-hand.

Newman said the district was in a rut to “settle” for and “tolerate” Lipinski. “We don’t like to ‘tolerate,’” she said. “We work, respect, prosper, recognize and appreciate each other.”

She gave the audience homework: “Find a Donald Trump supporter and find something in common,” she said. “If we don’t understand each other and work together, we will never overtake Congress in 2018.”