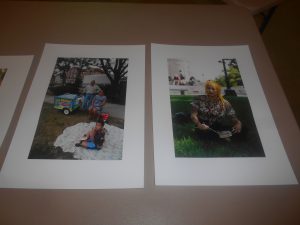 LSNSQ book will try to capture the spirit of Logan Square through images of people who live and work there. (Photo by Igor Studenkov/for Chronicle Media)

As far as financial planner Khloe Karova is concerned, one of the things that makes Logan Square, a Chicago neighborhood that has been her home for the past 22 years, special is the fact that the community is like an extended family.

Her approach to creating LGNSQ, a book of photographs that aims to capture what makes Logan Square a special place, carries some of that spirit. Even as she is putting together the book, which is scheduled to be released by the end of 2020, she set up a meeting on Dec. 3 at Hairpin Arts Center, inviting residents to not only give feedback on the photos they put together so far, but to suggest what other places and people should be included.

And the meeting wasn’t just about the book. As the attendees were keenly aware, rising property values, more upscale developments and the closure of many long-running businesses threatens to change what the book was trying to capture. Local residents and business owners, as well as a few nonresidents in attendance, suggested several ideas for averting displacement caused by gentrification — including shopping and hiring local, advocating for affordable housing and reaching out to new residents and older Spanish-speaking residents, who often get left out of such discussions.

Logan Square has historically been a working-class neighborhood. Scandinavian and German immigrants settled there during the early years. Following World War I, Poles and Russian Jews settled in growing numbers. Puerto Ricans and immigrants from Cuba, Mexico and various South American countries started moving in in the 1960s. By the 1990s, Latinos formed the majority of the population.

By that point, the Wicker Park and Bucktown neighborhoods further southeast were changing from ethnically diverse, artistic communities into destinations for young, more well-off professionals, leading Logan Square residents to wonder if their community would eventually meet the same fate. The last decade only intensified those concerns as proper values and rents went up, and more upscale projects were built near the Blue ‘L’ Line.

As the book’s website makes it clear from the start, the project has two intertwining goals — to capture the spirit of Logan Square and highlight how that spirit might be threatened. 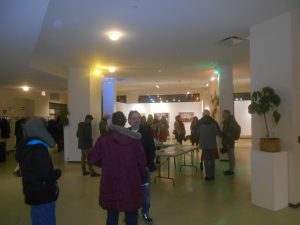 People attending LGNSQ book preview and community forum got a chance to look at photos that will go into the book. (Photo by Igor Studenkov/for Chronicle Media)

“The goal of this book is to remind us of what we love about Logan Square, stoke a dialogue about gentrification and inspire people to take action to preserve the things that make Logan Square a great place to live for everyone,” it states.

The site highlights several things that Karova and others involved in the project believe makes the neighborhood great — the fact that residents come from all sorts of ethnic, professional and educational backgrounds, abundance of public art and cultural venues, the small businesses, local community organizations, the parks and even Bloomingdale Trail. Also known as the 606, the former freight rail line turned trail has been blamed for rising property values along the neighborhoods it runs through, including in Logan Square.

For this book, Karova reached out to photographers and writers, most of whole live either in or near Logan Square. Each photographer got a different topic, such as street art, or nightlife. The writers are interviewing residents and businesses. And, as Karova proudly boasted during the Dec. 3 event, the book will be written in both English and Spanish.

“We’re trying to capture all of these diverse voices and everything that happens in the neighborhood, not just the cool stuff, not just restaurants that are going for Michelin stars,” she said.

The event was billed as a “Book Preview and Community Forum on Gentrification.” Attendees could look at the photos the photographers took so far, while photographers and writers mingled in the crowd. The event then shifted to the forum portions, with creators introducing themselves, talking about their roles in the project and what photos struck them the most. While the responses varied, one recurring choice was photos of ordinary people, be it a couple at an annual neighborhood family Halloween parade, a dancer competing in a contest, kids having fun or a local school bus driver posing in front of his vehicle. 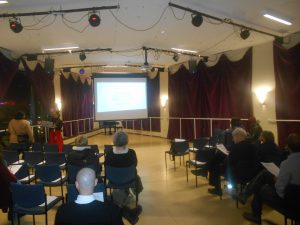 Some of the suggestions that attendees offered including taking portraits of homeless individuals living in Logan Square, portraits of residents who lived in the community for decades and tend to fly under the radar and street vendors.

“One of the things I’d like to see, as [Logan Square] gentrifies, is the theme of death,” he offered. “We’re losing a lot of businesses, [which leaves] shuttered storefronts.”

Which dovetailed into discussion of what the community could do to respond to gentrification. Some suggested supporting local artists and local businesses by buying their work and/or products and using their services. But one issue the discussion kept coming back to was affordable housing, since the reason the neighborhood is becoming less economically and culturally diverse is because many residents struggle to afford rents.

Karova argued that reaching out to local aldermen — who traditionally have sway over local zoning and permitting issues — can go a long way.

“I was at [Ald. Daniel La Spata’s (1st Ward)] office a few weeks ago about [the redevelopment of Hollander International Storage and Moving building],” she said. “Just show up, let them know — we’re here to stay, and [here is how] we want you to develop those things.”

Resident Julie Sulzen suggested reaching out to residents in the more upscale developments, citing the example of a resident of one of the buildings built east of California/Milwaukee Blue Line ‘L’ station.

“We have this woman who comes to our knitting group every Friday, and she definitely heard conversation about the place where she lived,” she said.

Sulzen asked Karova if she invited such newcomers to take part in the book — and Karova responded that they haven’t.

Rachell Zenn said she moved to Logan Square for Austin, Texas a few months ago. She said that “it’s kind of really terrible how similar gentrification feels [in the two communities],” but she also argued that “moving away from the distinction of ‘gentrifier’ as pejorative” would be a good idea.

Artist Pierce Cruz, who was born in West Pullman and currently lives on “a more white side of Morgan Park” — a mixed-race Far South Side neighborhood. He told the Chronicle that he’s been studying how white flight and redlining lead to disinvestment in majority-black communities like West Pullman, and he was interested in seeing how long-time residents of Woodlawn, a neighborhood further northeast, were responding to the increase in property values caused by the planned construction of Obama Presidential Library in the neighborhood. Cruz said he wanted to see what efforts to resist gentrification looked like in other parts of Chicago

“It’s interesting to see how the neighborhoods are starting to fight back,” he said.

During the meeting, Cruz said that changing how outsiders see Logan Square could go a long way.

“I feel like I’m too poor to be in this area, even though there’s a variety of people,” he said.

Ines Bellina, one of the writers for the project, said that one thing the work drove home is that the idea that Logan Square’s Latinx population is either gone or on its way out is wrong. The community is still there, and it should be engaged.

“They literally don’t know if that [many Logan Square community organizations] exist, or that they can go,” Bellina said. “I had people say,  ‘Oh, I thought it was a membership thing.’ If you’re not seeing them, it’s really not because of animosity, but because nobody has shown them  this is your association too.”

For more information about the project, visit lgnsq.com