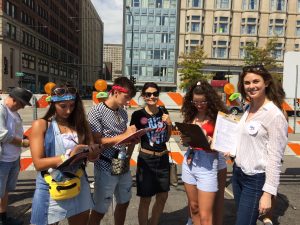 A League of Women Voters representative registers young voters for the November midterm election as they stand in line outside Lollapalooza. (Photo by Kelli Duncan / for Chronicle Media)

A group of volunteers from the League of Women Voters (LWV) Chicago stood on Michigan Avenue outside of Lollapalooza this past weekend (Aug. 2-5) in an effort to register young people to vote while they wait in line.

Lollapalooza has quickly become one of the largest and most popular music festivals in the country, with over 400,000 people attending the four-day festival in 2017.

“There’s nothing like a group of young people in line with nothing to do, they’re very ready to register to vote,” Mardikes said. “They’re ready anyway but it just gives them a convenient time to do something they wanted to do anyway.”

Mardikes said they only went to the last two days of Lollapalooza in 2017, but it was such a success that they decided to go all four days this year.

“I think we got a little over 15 people each day, which for an hour’s work is pretty good,” Mardikes said. “We only catch the people standing in line for about an hour because once the gates are opened the kids are very focused on getting in.”

After the first day at Lollapalooza this year, Mardikes said they didn’t get as many people registered as last year because of how many attendees come from out of state. But, she said oftentimes the most important part of what they do is serving as a resource to give people more information on the voter registration process.

“A big part of it with the young voters is just voter education,” Mardikes said. “A lot of young people don’t know that you can register to vote at 17 if you will turn 18 before the time of the election. So, just interacting with kids and getting out information like that is very important.”

Lollapalooza is just one example of how LWV Chicago is working to get young people registered to vote in the November midterm elections, Mardikes said.

“We’re trying to get something organized so that on National Voter Registration Day we can get all of the high schools in the area to have a voter registration drive,” Mardikes said. “We’re trying to have it be student driven because that’s worked so well in the past.”